A xenophobic populist gets elected to the American presidency, inciting fear and upending the political system. Sound familiar?

No, we are not talking about the 2016 election (or 2020, for that matter), but The Plot Against America, HBO’s new limited series based on Philip Roth’s acclaimed novel. The first episode in this six-part drama, which premiered Monday and hails from David Simon (The Wire), introduces us to the Levins, an everyday American family residing in a Jewish neighborhood in Newark, N.J. Read on for a recap of Part 1. 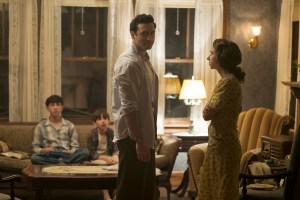 MEET THE LEVINS | Despite living through the Depression, the Levins have it pretty swell. Dad Herman (Homeland’s Morgan Spector) goes to work every day and earns enough to provide for his family; mom Elizabeth “Bess” (The Deuce’s Zoe Kazan) keeps the house in order and makes sure everyone is home by dinner; oldest child Sandy draws and flirts with local girls, while his younger brother Phillip collects stamps and dutifully sings the American national anthem at school.

TROUBLE AT HOME AND ABROAD | Across the pond, though, things are not so great. Having conquered France and most of Eastern Europe, Hitler begins his assault on the British. As President Franklin Roosevelt considers entering the war on behalf of the British and the French, aviation hero and Nazi sympathizer Charles Lindbergh announces his candidacy for the Republican nomination for president. (Lindbergh’s run is fictional. While he never ran for president, he was against entering the war until Pearl Harbor). This, of course, alarms the Levins and their Jewish neighbors and, while the poignant criticism against Lindbergh by newscaster Walter Winchell offers some comfort, tension in the community begins to rise. 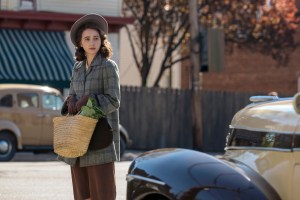 But not all news is bad news. Herman has been offered a promotion, which will allow the family to move out of their cramped two-family house into a spacious single-family home outside the city. While the suburb is beautiful and calm, Bess points out that they would be the only Jewish family in the neighborhood and reminds Herman of her difficult childhood as part of the only Jewish household in her community. To make matters worse, the neighborhood is right near a German bar, where anti-Semitic comments are all too common and Lindbergh’s photo is propped up for all to see. Herman eventually decides to turn down the promotion, but that does little to quell Bess’ fears, who now worries that the company will see Herman’s rejection as a sign of disloyalty. (A note for those that are not experts in 1940s American history. The Jewish community was not assimilated back then as well as they are today. Universities imposed limits on the number of Jews they would accept, and it was difficult for them to rise up in certain professions.)

ALLLLLLVIN! | But the Levins’ troubles don’t end there. On the way home from school, Sandy and Phillip stop by the local gas station, where they are accosted by the owner who claims Alvin (Derry Girls’ Anthony Boyle), Herman’s orphaned adult nephew who lives with the family, stole money while working for him. Sandy swears Phillip to secrecy, knowing that the news would only worsen the growing tension between Alvin and his uncle.

That is not the only secret the two brothers share. Turns out that Sandy is a major Lindbergh fan and refuses to tear up the three beautiful sketches he drew of his hero. He makes Phillip promise to not tell their parents that he is keeping them, noting that if they found out they would also make Phillip throw away his Lindbergh stamp from his collection.

SISTA SISTA | Meanwhile, Bess’ sister Evelyn (Stranger Things’ Winona Ryder) asks her to watch their elderly mother for the day so she can meet up with Angelo, her married, Italian lover. Bess reluctantly agrees to give her older sister the day off and heads to her mother’s house, where she discovers that the matriarch of the family is showing early signs of dementia.

Evelyn heads to New York to spend the day with Angelo, but things don’t go as she planned. Angelo reveals that has no intention of leaving his family, fearful of what a divorce would do to his children and mother. However, her fortunes take a turn when she hits it off with the charismatic Rabbi Lionel Bengelsdorf (The Night Of’s John Turturro) at her Teacher’s Union meeting.

FIGHTING BACK | Back in Newark, Sandy confronts Alvin about the thievery allegations, which he denies. Alvin explains that his buddy Shush stole the money and he just covered for the guy. This does little for Alvin’s cause, though. Phillip tells his mother about the gas station, which leads to a heated confrontation between Alvin and Herman. Furious at the accusations and the lack of trust his uncle displays towards him, Alvin packs his things and moves out.

After taking some time to calm down, Herman apologizes for making a scene and goes looking for Alvin to bring him home. But his troubled nephew has other plans. After one of his friends takes a beating from some anti-Semitic thugs, he and Shush head to the same German bar that Herman and the family drove by just a few days ago. They follow two drunken Germans on their way home and beat them to a pulp. “That’s for Daniel, you Nazi f—ks,” they yell out as they are fleeing the scene.