Warning: The following contains spoilers for Sunday’s “killer” episode of The Walking Dead. If you’d prefer to watch first, read later, off you go.

In Sunday’s exceptionally eventful episode of The Walking Dead, the bodies piled up fast and furious… and in a couple of instances reanimated to, however briefly, keep on keeping on. But the demise that was sure to have people talking — and, if they hadn’t read the comic-book series, gasping in shock — was the one that came last. And it wasn’t even the biggest “Whoa!” moment in “Walk With Us.” Read on, and we’ll work our way up to the point at which you likely lost your head along with a certain villain. 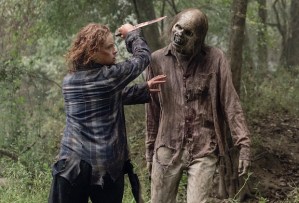 ‘I REALLY NEED TO SHOW Y’ALL HOW TO SAVOR A VICTORY’ | As the hour began, the Battle of Hilltop was still raging, and except for all the walkers lumbering around, it looked pretty much like the awesomest night ever at Medieval Times. (Of note: It turned out that Daryl with a mace > Daryl with a crossbow.) Since the community was burning like a marshmallow that’s fallen into a campfire, Ezekiel, as he promised Daryl he would, ushered the kids to safety. All except for Judith, who had entered the war zone and had to be led away by Earl. While Eugene ran into Barrington House in hopes of saving some of his radio equipment, Yumiko spotted Magna among the Whisperers’ “guardians.” She was alive, though at that moment, it was hard to tell; Magna is, after all, sort of a master of the dead-eyed look. The morning after, Alpha rejected Negan’s suggestion that she do a victory dance. In her mind, it wasn’t a win since she hadn’t gotten everything she wanted — in other words, Lydia. After Beta vowed to retrieve Alpha’s daughter for her, “Frowny McTwo-Knives,” as Negan called him, ordered his nemesis to herd walkers.

While tackling his menial task, halfheartedly at best, Negan spotted Lydia hobbling through the woods and gave chase. Bumping into Aaron — “Sup, bro?” I only wished Negan had said — the newbie Whisperer tried to explain why he was wearing a walker-skin mask. But since Aaron wasn’t in a listening mood, Negan left him to fight walkers while he apprehended Lydia. Meanwhile, as Alden, Adam, Kelly and Mary made their way to the Hilltoppers’ rendezvous point, the erstwhile Gamma finally won over her nephew’s protector… just in time for her to have to split from the group in order to lead away a bunch of walkers. She managed to dispatch the lot of ’em, too, only to be sucker-stabbed by Beta, who was determined to add her to the horde. Since she’d ripped his mask during the attack, a nearby Whisperer was able to see enough of Beta’s face to recognize him. As whom? Not clear. Regardless, Beta was so anxious to keep his identity a secret that he immediately killed the guy. Then, just as Mary reanimated, Alden put an arrow in her brain, and Bruce Wayne — sorry, I mean Beta — took off. 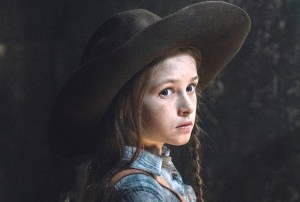 ‘WE GO THROUGH S— TO GO THROUGH S—‘ | Elsewhere in the woods, also en route the Hilltoppers’ meeting shack, Magna told Yumiko that she’d lost Connie after they’d escaped from the cave-in with the horde, Eugene fretted over the loss of his one means of communicating with Stephanie, and an uncomfortable Carol just wanted to make tracks so they could arrive before nightfall. Itching to throw down with the woman she blamed for Magna’s near-death, Yumiko seized the opportunity to get in Carol’s face — and punched it when Henry’s mom offered a reading from her personal book of hopelessness. Off that dustup, Magna announced to Yumiko that she couldn’t “do this anymore,” and they either sweetly made up or broke up for good; I honestly wasn’t sure which. I’m going to guess the former, though, since they ended the scene holding hands. When Eugene subsequently approached Carol, he shared just enough vague details about “the biggest meeting of my life” for her to glean that he was smitten. So what if Hilltop’s rubble? Carol basically said. “Just go to her.” (Am I mistaken, or was this the first real Carol/Eugene scene ever?)

Next, we joined Daryl, Rosita, Jerry, Nabila and some others as they arrived at the meeting place, only to find it empty. “Where are my babies?!?” cried Nabila. Turned out, the youngsters were all back at Hilltop, hidden out at Earl’s. And didn’t I say last week that he’d given the kind of pep talk that got people killed on this show? Well, I was right. He’d been bitten. So he asked Judith to keep her peers in the back room while he bashed his head into a spike that he’d nailed through a table. While he was working up the nerve to go through with it, Daryl, Jerry & Co. arrived at Hilltop, found Ezekiel miraculously unharmed in the ruins, and made a beeline for Earl’s. The old fella did manage to bang his head against the stake but apparently not hard enough to impale his brain. So when Judith peeked in, Zombie Earl attacked her. She was fine, though. Brave Lil’ Ass-Kicker, Daryl discovered, had put down Tammy Rose’s widower herself.

‘SHE WILL ALWAYS BE MY BABY’ | As the end of the episode drew near, Negan informed Alpha that he had found what she was looking for and led her to a remote shack (because we all know you can’t take two steps in those woods without stumbling upon yet another isolated shack). While Lydia frantically tried to untie herself, Alpha strolled along with Negan, floated the idea of him forming his own branch of the Whisperers and explained in typically bonkers fashion why she was going to kill her daughter. “I have to do it because I love her,” she said. Mmkay, crazy lady. The two then shared a kiss, and as Lydia threw open the door of the shack, so did her mother. WTF? said Alpha’s expression. Lydia wasn’t in there; she must have been at one of the other thousand shacks in the woods. In a flash, Negan had slit a stunned Alpha’s throat and given her one more kiss before dying. Then, next thing we knew, he’d tossed her severed (and reanimated) head at someone’s feet: Carol’s! “Took you long enough,” she cracked. How long had they been in cahoots?!?

So, what did you think of “Walk With Us”? Was I the only one who hoped Mary would stick around? Which surprised you more — that Negan offed Alpha… or that he had been plotting with Carol? Hit the comments with your reactions.