This week on The CW’s Legends of Tomorrow, (Tuesdays at 9/8c), the team crosses paths with William Shakespeare — which among other things is apropos, given that Ray Palmer parting with the team will be such sweet sorrow.

TVLine spoke with original cast member Brandon Routh — who in fact made his Arrowverse debut with an October 2014 episode of Arrow —  about bidding “Haircut” adieu, everything that he and real-life wife Courtney Ford poured into their farewell run, and the good/bad of period costuming.

TVLINE | You detailed on Michael Rosenbaum’s [Inside of You] podcast how difficult it was getting the news that your Legends run would be ending. Was filming Ray’s final arc, and then doing press for it, therapeutic in any way?
Maybe therapeutic in some ways. I think that the way for Courtney and I both to get over it is just distance. Everything keeps bringing it back into our field of vision, with the episodes coming out. Time away and moving onto the next project will help with that, more than anything.

TVLINE | Have you seen your final episode put together yet?
I’ve seen the rough cut, yeah — and it’s probably the best work I’ve ever done, ironically. The last two episodes, I think, are two of the best episodes the show has ever made. The rom-com that Courtney and I did in the last episode [where Ray and Nora got married] was so much fun and had such a great energy, and what comes out of that, with the relationships and the emotionality of our final episode, is really powerful stuff.

TVLINE | I lost it at least twice, and definitely when Ray and Nate said goodbye. But I’m admittedly a softie.
I wasn’t trying to make anybody cry; I just couldn’t stop crying!

TVLINE | Tell us about Ray’s final mission with the team.
He has basically told everybody that he and Nora are going to leave the ship — everybody, that is, except Nate. And he’s having a hard time telling Nate. Everybody’s trying to get him to tell Nate, but he can’t. Instead, he tries to keep the mission going by not finding this ring they have to find [for the Loom of Fate]. And then Nate decides to turn it all into a bachelor party, which lets Ray spend as much time with his buddy as he can before he has to leave.

TVLINE | Did you ever imagine the end of this bromance would be directly juxtaposed with the story of Romeo and Juliet?
[Laughs] I had my own challenges with the episode just as far as it being my last, but it’s a pretty genius [narrative device] to use, and I don’t think I was really able to articulate that to [writers] Ray [Utarnachitt] and Matthew [Maala]. It really is honestly pretty genius how they did it. I was too heartbroken at the time to express that to them. 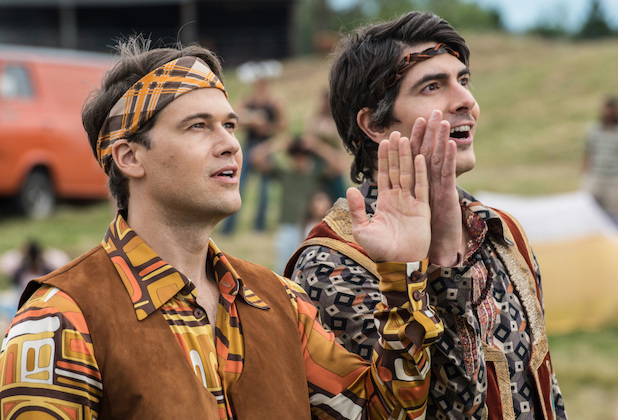 TVLINE | Was the Ray/Nate bromance born out of your off-screen friendship with Nick Zano, or vice versa?
We became close because of the story. Even though we’re different people, we “get” each other on an emotional/spiritual level, which we talk about on and off set. And our sense of humor just jibes. A lot of the comedy is written, but there’s also improv that we do. There was a scene in the cargo bay where we’re packing for a mission and he keeps handing me sandwiches, and I kept handing them back him, and he’d hand them back to me…. Just stupid stuff like that to amuse ourselves. Some of it made it in, some of it didn’t. [Laughs]

And Ray, dating back to the Arrow days, was always one to give high-fives but no one ever wanted to give him one back. But Nate would. And people responded to that. It was mutual in that Nick and I saw the audience’s response to it, that they had love for these characters, and we figured we could be doing a service by adding to what the writers were giving to us. 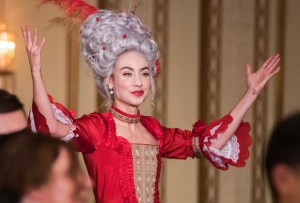 TVLINE | Did you have as much fun as the rest of us watching Courtney let loose as an exasperated fairy godmother and then with her take on Marie Antoinette?
Oh, man, she is so good.

TVLINE | So good.
She worked so hard, I tell you, so hard on being able to do a French accent, and she could do it so well that she could just then be so big with it and so absurdly funny — and beautiful at the same time. I don’t know if when they wrote [Marie] that they imagined that at all.

One of the wonderful things that this experience has given her is Legends of Tomorrow allowed her to show her comedy skills. She has such great instincts, and is so funny, that I think that’s going to be missed from the show. The rom-com we did in the last episode, I’d love to do that for a long time with her. We got that one episode and we cherished it, we worked on it, we took what the writers gave us and saw where we could make the energy and tension go. We care so much about these characters, we were continually doing our homework. Because it was us having to say goodbye, we did our work. 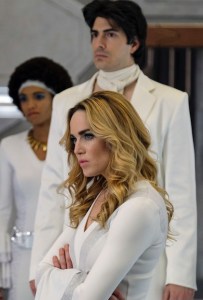 TVLINE | Out of all the period costumes you’ve worn over the years, do you have a favorite or least favorite?
The least favorite were the boots from World War I — it was a really annoying, tall boot, almost to your knee, and they were really hard to get on. I also didn’t care for the disco stuff — that was not a favorite, but fun. [Laughs]

As far as my favorites, I loved “Sir Raymond of the Palms,” the being in the armor, sword fighting. But also I liked, in Season 3, when we were at the circus, the linens were really comfy! Even though they were heavy and warm, they were comfortable in a weird way.