Putting your own life on the line to work for a shady ruffian is one thing, but it takes some real gall to force your sweet, adorkable boss aboard your sinking ship. Yet in this week’s episode, that’s exactly what the Good Girls need to do in order to stay alive.

Being high on Rio’s hit list can’t be a great feeling — I think pumping a mobster with bullets is the crime-equivalent of poking a bear — but Beth and the gals know they need to stay one step ahead if they want to survive this ultimate cat-and-mouse game. In Sunday’s hour, Beth hatches an insurance plan, but will it be enough to keep them safe? Let’s take it from the top.

With Beth and Rio’s new operation up and running, one of his lackeys comes through the stationery store looking to pick up his “order” (read: a box full of counterfeit cash). He takes quite a shine to the store’s printing press and asks a few too many questions for comfort. Is Rio’s crew planning a heist, or just looking to off the middle (wo)men?

Beth’s spider sense is tingling, so she schemes up a plan to safeguard her posse. She brings the printing plates to Ruby and Annie and tells them each to hide one. You know, in case one of them “disappears.” Anyone can operate a printing press, but without the plates, the gals can’t be replaced… or killed. That’s the running theory, at least.

Annie deals with last week’s rejection the best way she knows how: by hooking up with a homeless guy, or rather, a guy who is “experiencing homelessness.” Afterwards, he asks to shower at the convenience store. Once he heads to the bathroom to wash up, the look on Annie’s face is absolute dejection.

After flushing their kids’ dead fish, Dean finds Beth’s cash plate and he’s not happy. “He’s going to kill me!” Beth blurts. Dean pauses. “You don’t kill something you love,” he says before SNAP! The plate’s a goner. 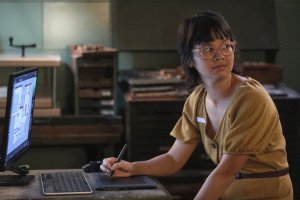 The ladies approach Lucy about creating more designs, lying about hosting another charity casino night. Unbeknownst to them, Lucy found out about the fake cash and wants no part of whatever they’re up to. The ladies contemplate a new plan. Annie breaks into Lucy’s house and steals the girl’s beloved pet bird. Mid-heist, Ruby tells Beth that she thinks Stan is going to leave her, mostly because of what they do. “This is who he thinks I am now,” she says.

Rio pays Lucy a visit at the store. She asks about his tattoo, and the two start chatting about art. She tells him she draws and designs everything found in the store, and if he needs any help to let her know. “That’s good because I’d really like to get rid of the person I’m using now,” he says.

Before the women can blackmail Lucy with birdie endangerment, they find that Rio and his crew have beat them to the punch. When a customer enters, Beth has a chance to beg Lucy in private to not finish the job. Lucy asks her, “as a friend,” how she could ever steal her pet. Beth promises she never would’ve hurt him, but Lucy’s lost all trust in Beth at this point. She completes the project and hands it to Rio on a flash drive.

Rio tells the women they’re going for a ride, and we all know this can’t be good. Lucy gets in the van, while Beth argues that just because he has the cookbook doesn’t mean he can make five-star dishes. There’s a science to getting counterfeit paper and coloring just right. He needs them. “Not all of you,” he says. His guy then shoots Lucy point-blank, and just like that, Rio’s crew is outtie.

After their traumatic experience, Ruby wakes Stan up in the middle of the night to tell him not to give up on her (awww), and Beth adopts Lucy’s bird as the family’s new pet. Dean tells Beth he wasn’t trying to make things worse before, he just hates her being around Rio again. “Me, too,” she says solemnly.

The episode ends with Lucy’s boyfriend trying to track her down. She didn’t come home the night before (duh), and he’s worried beyond belief. “Maybe she’s with friends,” Beth offers. “She didn’t really have friends, except for you,” he responds. All over Beth’s face, we can actually see the guilt eating her alive.

Poor Lucy! She never deserved this. Will Beth, Annie and Ruby ever be able to live with themselves? Drop your thoughts in the Comments below!