By the time this week’s episode of Batwoman drew to a close, Kate and Alice had just a bit more in common as estranged twin sisters.

When a KO’d Cartwright was left on Batwoman’s veritable doorstep — with the note “ASK ABOUT MOMMY DEAREST” tucked between his lips — Kate called Jacob over to The Hold Up, explaining that Alice 1) actually is alive, and 2) had dropped off her former captor. When Cartwright came to, he explained that he led Alice to where Mouse had been holed up, strapped to a canister of Jonathan “Scarecrow” Crane’s fear toxin. And now it was just a matter of time before Alice’s “brother” turned the tables on she whom he fears most and hooked her up to the gas.

When Mouse did precisely that, tied-up Alice’s worst fear was manifested in the form of Cartwright’s mother. Mabel, we learned via flashbacks, was an abrasive, oxygen tank-dependent old broad who when she came for a visit to the farmhouse abused Alice in her own ways, such as scalding her hands with tea that was served too hot/sweet. Back at The Hold Up, Cartwright taunted Kate and Jacob that if Alice wasn’t found in time, the fear toxin would take her to a point of no return, stripping her of any sanity she had left. Kate traded Cartwright his freedom for the address, and Jacob arrived just in time to inject Alice with adrenaline to neutralize the toxin. 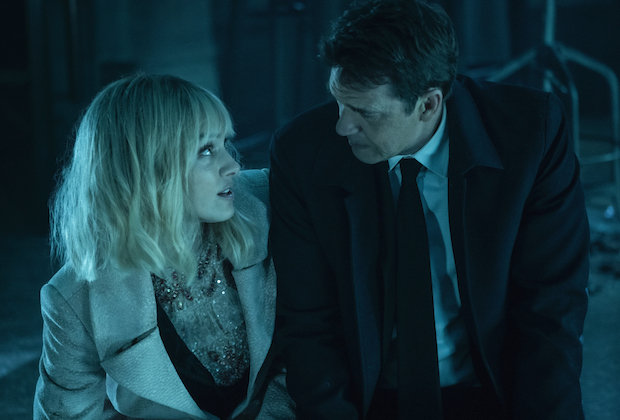 As Jacob calmed Alice immediately afterward, she corrected him that the “Mommy Dearest” referenced on the aforementioned note was not Mabel Cartwright. No, she was referring to her and Kate’s mother, Gabi. Kate meanwhile flipped out when Cartwright, following a thwarted suicide attempt, mentioned Gabi Kane’s earrings, which matched her daughters’ birth stones. How did he possibly know? Cut to a flashback where a teenage Alice (suddenly played by Rachel Skarsten) got curiouser and curiouser about a padlocked freezer on Cartwright’s property. Picking the lock, she found inside her mother’s severed head!

Cartwright’s mother apparently was obsessed with the late Gabi Kane, and coveted her looks. After her grim discovery in the freezer, Alice paid Mabel a visit, turning her uncorked oxygen tank into a flamethrower with which to roast her!

Kate simultaneously came to realize, via Luke and Mary’s own side investigation, that it was Cartwright who killed the other Beth, and so she began to throttle him… to the point that he died, marking her first kill. “Now both your daughters are killers,” an amused Alice pointed out to Jacob, as they arrived at The Hold Up. Shellshocked by her actions, Kate sucked down a bottle of booze out in the alley, and started texting Sophie to come to her side — but stopped, when Alice stepped outside and joined her. Taking a swig of her own, Alice said she and Kate have a long night ahead of them, seeing as her experience has been that dead bodies such as the one inside the bar don’t bury themselves!

What did you think of the episode “Off With Her Head”?