How much does the Inspector lady on Elite wish she could investigate something that didn’t involve a bunch of high schoolers? Season 3 of Netflix’s Spanish-language teen drama returns with yet another murder involving the Las Encinas students, and I have to imagine the Inspector goes home to exclaim, “Darn those kids! I better get a promotion after this!”

But in all seriousness, the premiere opens with a graduation party, during which someone suddenly comes crashing down to the first level of the dance club. As the camera pans up from the horrified crowd gathered around the body, we see Carla standing near broken glass, looking concerned.

Cut to five months earlier, and Polo is being released on bail while he’s still being investigated. The judge has requested a confrontation between Polo and his accuser Carla to compare their accounts. Guzman is not too worried — “One look from her, and Polo will s—t his pants,” he says — but Samuel breaks the news to him that people don’t always get what they deserve. Carla informs Polo that she’s going to tell the truth… but she’ll give him a chance to confess first. Carla’s dad, however, would very much like her to keep quiet, noting that if she tells the truth and the police look into his dealings, it could implicate her mom, and she will lose her business.

At school, Samuel tries to appeal to Carla. Even if she loses everything, “you’ll have me. I love you,” he says. She slaps him in response. She thinks he’ll only love her as long as she does what he wants, and if she doesn’t, then he’ll discard her. “No, it’ll prove you’re the person I fell in love with,” he insists. (I’m with Carla here, because I’m having a hard time buying that Samuel is truly in love with her, much as I enjoyed the Samuel/Carla story in Season 2. Also, wasn’t he just in love with Marina?) 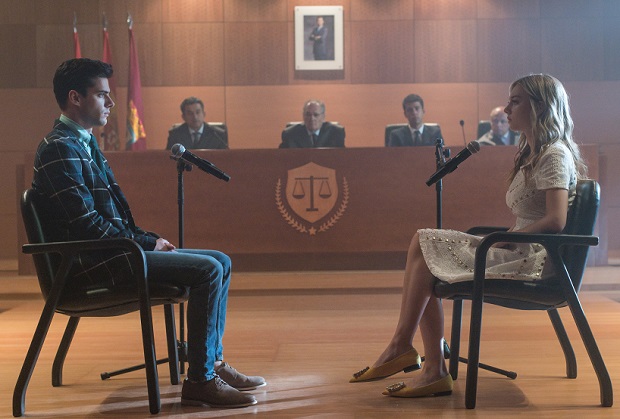 Meanwhile, Polo is freaking out and frantically calling Ander, who keeps ignoring him. Polo doesn’t want to live his life waiting to be caught when Ander talks. Polo also brings up the trophy, which Cayetana says is safe with her and is too risky to get rid of right now. (She’s totally holding onto it to have something over him/to tether him to her, yes?) At the confrontation, Polo looks to be on the verge of confessing, when Carla interjects and says she made up all the allegations. “If she really loved you, she wouldn’t have stabbed you in the back,” Guzman tells a disappointed Samuel. Realizing that he can’t let Polo get away with what he did, Samuel tells his mom to go be with Nano, while he will stay behind at home.

As for that flash-forward murder mystery, the victim is… Polo! And someone stabbed him before he fell! Carla tells the Inspector that she ran down to the dance floor after the crash, but she actually followed a trail of blood to the restroom where she gathered a bloody, broken bottle and stuffed it into her purse. However, the potential murder weapon is not in her bag when the Inspector empties its contents. “I would never hurt him. Not him. I loved him,” Carla claims.

Plenty more also goes down in the episode:

* While trying to distract Ander, Omar notices a lump on his boyfriend’s groin. Ander goes to have it tested, and judging by the way he breaks down after the university rep asks where he sees himself in five or 10 years, the results are definitely not good. 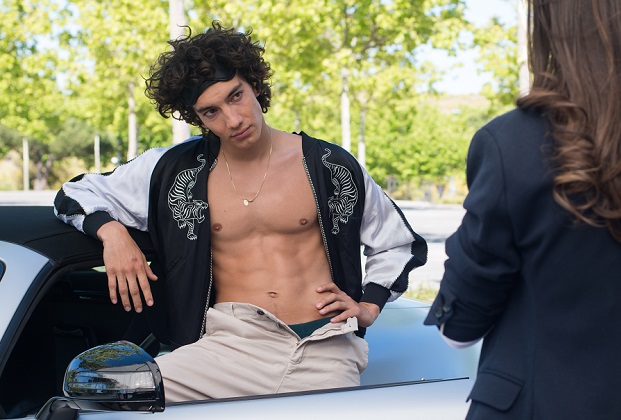 * Rebeca tries to get over Samuel by getting under Valerio, but he can’t get it up. What’s worse is he’s sleeping in his car after being rejected by his mom. Seeing that he needs help, Rebeca tells Lu, who invites Valerio to stay at the house while their father is traveling. Unfortunately, Dad comes back early and threatens Valerio with jail time for abusing his underage daughter. Shockingly, Lu stands up for her half-brother and argues that she’s not an innocent child. “I f–ked Valerio because I needed him. I wanted him… more than anything in the world,” she confesses. Well, if she’s an adult, she’s going to live like one, her dad decides. He will provide shelter and food, but he’s cutting her off, otherwise — that includes paying for university — and he wants her out of the house when she turns 18.

* With representatives from the world’s best universities visiting, Nadia puts her focus on her future — but still finds herself being somewhat distracted by a boy. This time, it’s not Guzman, but a fellow Muslim student named Malick, who is like the fourth richest kid at school. As for university, one of the reps bluntly tells her they can’t give her a scholarship because they heard about a certain video that’s been going around.

Elite fans, what did you think of the season opener? Grade it below, then hit the comments!