We’ve got questions, and you’ve (maybe) got answers! With another week of TV gone by, we’re lobbing queries left and right about shows including Five-0, Batwoman, Zoey’s Playlist, This Is Us, The Outsider and more!

1 | Did Hawaii Five-0‘s Frank Bama entice you to add bacon grease to your waffle batter? (And given the guest star, would such a meal constitute a “breakfast Buffett”?) Lastly, did Steve saying, “Admit it, Danny, you’re gonna miss this when it’s done” — while riding off on horses, into a sunset — draw out your first tear for the April 3 series finale?

2 | Did you half expect this week’s Batwoman villain (above) to be named Corona Virus? peaking of which, is every Villain of the Week going to be a twentysomething female? What, did all the bad dudes leave town with Batman? Also, can we agree that the use of a freshly sliced-off face to immediately masquerade as someone else is one of the Arrowverse’s most “schmience”-y leaps?

3 | Are you disappointed that Zoey’s Extraordinary Playlist seems to be pursuing a Zoey/Simon romance anyway, despite Zoey’s mom’s sound advice not to get involved? And given that the Flint water crisis has yet to be resolved, did you cringe at Emily’s joke about a city’s polluted water supply? 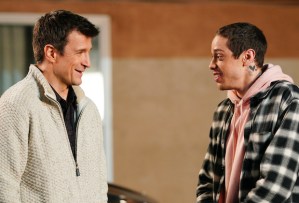 4 | Did The Rookie guest star Pete Davidson impress you with his hilarious turn as, um, Pete? Or was he in large part just playing SNL‘s Chad?

6 | Is it weird that The Walking Dead has us as invested in Eugene’s budding romance with Stephanie — whom neither we nor he has met — as we are in Daryl’s with Connie? Also, are we done with Sad Carol yet? (If not, can we be?)

7 | Was The Outsider‘s Holly actually scratched by El Cuco, or is some falling cave debris the cause for her arm scrape? Would you watch a second season that follows Ralph and Holly working another supernatural case? 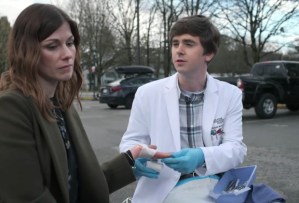 8 | Has The Good Doctor, which shoots in Vancouver, completely given up on trying to make it look like it takes place in sunny California? (This scene was obviously shot in the dead of winter. You could see Shaun’s breath when he spoke!)

9 | Is it any wonder that The Voice’s Blake Shelton seems off his game, given how few country singers have passed through Season 18’s Blinds? 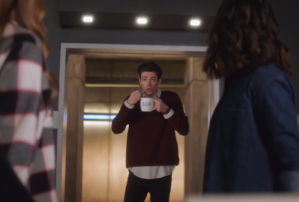 11 | This moment from The Flash was totally a nod to the Baby Yoda Soup meme, right?

12 | Bachelor fans, how bummed do you think ABC is that Hannah Ann can’t be their next Bachelorette, considering she’s a perfect candidate after Peter wronged her? Why did they keep showing booted contestant Kelley in the finale crowd, if she had nothing to do with the outcome? And how long until ABC gets Peter’s very vocal mom Barb her own spinoff? (Can she host the upcoming seniors-only edition?) 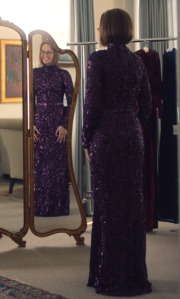 13 | Is This Is Us giving septuagenarian women everywhere the false hope that they too can have the body of a 35-year-old Mandy Moore? Speaking of Rebecca, and to many a reader’s point, could Miguel be any more marginalized when it comes to his own wife’s healthcare? And with all of the talk of hopping into “the city,” doesn’t the show treat Pittsburgh like it’s a suburb of Manhattan? (The two places are at least a six-hour drive apart!)

14 | Was this week’s Riverdale, with Jughead painstakingly laying out the evidence about his attempted murder, kind of one big “well, duh“? And do you really think Archie and the gang can keep their “no more mysteries” pledge for the rest of senior year?

15 | On Survivor, how risky was it for Sarah to not use her steal-a-vote advantage at this week’s tribal? Were you sad or glad to see “The Robfather” taken out?

16 | SEAL Team viewers, who do you think Clay should choose: Stella (played by Alona Tal) or Rebecca (Adelaide Kane)? 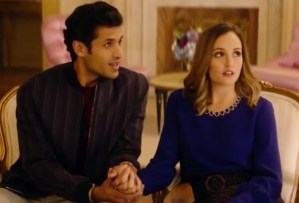 17 | Did Katy Keene‘s Leighton Meester look-alike, Erica Pappas, cause any other viewers to do a double take?

18 | How is it that the black eye Station 19’s Rigo gave Jack during the snowstorm is healing more slowly than DeLuca’s frostbitten hands on Grey’s Anatomy? And how much do you hope that by season’s end, we get to hear the love song Grey’s‘ Link would’ve written Amelia? 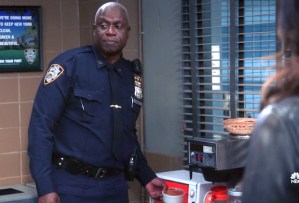 19 | How did Brooklyn Nine-Nine‘s Holt manage not to burn his hand when he removed his lunch from the toaster oven — sans oven mitt?

20 | After all of A Million Little Things‘ adoption drama in the past few episodes, wouldn’t you have expected Regina and/or Rome to mention Eve’s name at least once this week?

21 | Regarding Elite‘s season premiere, is anyone else concerned that the authorities can’t find Christian? Shouldn’t he be in Switzerland, getting treatment for his injuries? Was the episode’s most genuinely heartfelt moment, surprisingly, the one in which Lu defended having sex with her half-brother? And after Episode 2, is anyone not shipping Guzman and Samuel?