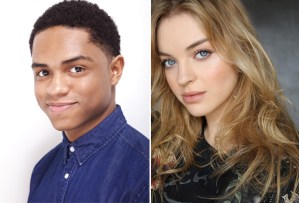 Banks, the first African-American actor to portray Evan Hansen, will play Howie, a “hyper-smart, adorkable high school junior who works at Big Red’s family’s pizza shop. And here’s a fun little fact: The character of Howie was named after playwright and lyricist Howard Ashman, whose many collaborations include Beauty and the Beast, the musical being performed in Season 2 of HSM:TM:TS.

Keegan, a two-time Daytime Emmy Award nominee for her work on Days, is also joining the cast as Lily, “an energetic and adorable East High freshman whose sweetness masks her insecurity and highly competitive nature.” Frankly, it sounds like we’ve got another Tiara Gold on our hands if. (You all remember Tiara, yes? The evil British exchange student from High School Musical 3 who attempted to overthrow Sharpay? Come on, what are they teaching in school these days?!)

It was also recently announced that Derek Hough (Dancing With the Stars) will recur in Season 2 as Zack, Miss Jenn’s ex-boyfriend. A charming but sneaky actor, he returns to Salt Lake to teach drama at East High’s biggest rival, North High.

Your thoughts on HSM:TM:TS‘ latest additions? General hopes for Season 2? Whatever’s on your mind, drop it in a comment below.