A high-ranking member of the NYPD was killed off in Thursday’s Brooklyn Nine-Nine — and that was only the second biggest development of the episode.

In the cold open, Terry entered the briefing room and revealed to the squad that — spoiler alert! — acting commissioner Madeline Wuntch (played by Kyra Sedgwick) had died; her cause of death was undisclosed. Holt was convinced that his archnemesis had somehow faked her own death — “This is some sort of scam,” he said. “If she was dead, we would be hearing the sounds of children singing in the streets!” — but once he got a peek inside her coffin, reality set in. He returned to the office, singing, “Ding dong! The Wuntch is dead!” while hurling bagels at his fellow men and women in blue. He then informed Amy and Rosa that now that Wuntch was dead, he’d be returning to his rightful position as captain of the Nine-Nine. 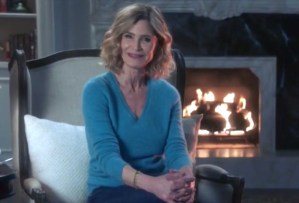 Beforehand, though, Wuntch again tried to ruin Holt’s career — this time from beyond the grave. In her final days, she told everyone that they had reconciled, and that Holt had insisted on hosting and organizing her NYPD memorial service. She knew he wouldn’t be able to resist bad-mouthing her during his eulogy, and all of the top brass would be there; if he spoke ill of the dead, his career would be over.

But wait, there’s more! Knowing that Holt would try his darnedest to deliver an appropriate eulogy, she sent in her nephew Adam (played by MADtv vet Michael McDonald) to pose as a fellow arch rival. Adam got Holt on tape saying some truly heinous things about his aunt, which he then projected behind the captain as he read a proper eulogy. Luckily, Holt was one step ahead of Wuntch. He figured she’d pull something like this, so he staged a fake memorial and filled it with members of a local improv group; no one in attendance was actually a member of the NYPD. A real memorial followed, where Holt realized just how much he’d miss his longtime nemesis. Then, instead of read aloud a prepared eulogy, Holt spoke from the heart:

“As many of you know, Madeline and I were bitter rivals, but I’ve come to realize that she held a special place in my life,” he said. “No one challenged me like she did, or made me feel as alive. Our relationship was like an epic chess match, and it’s hard to believe that she’ll never make another move.” 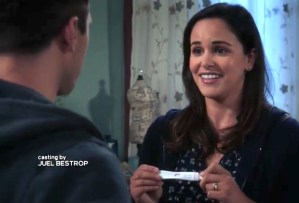 The episode then ended with a momentous tag scene: After months of struggling to conceive, Amy came to Jake and revealed that she’s pregnant. A #Peraltiago baby is on the way!

What did you think of Brooklyn Nine-Nine Season 7, Episode 7: “Ding Dong”? Hit the comments with your reactions.