Wade Felton aka the titular widower of The Unicorn has a lot going on as the CBS comedy serves up its freshman finale this Thursday at 8:30/7:30c. For one, his older daughter, Grace, has an important dance she may or may not go to. And that momentous occasion coincides with Jill’s birthday, his late wife’s first since she passed on.

TVLine spoke with series star Walton Goggins about the hidden pleasures of network comedy (versus the cable-TV fare to which he is accustomed), how he helped shape The Unicorn‘s season finale, and the very familiar face who pops up in Wade’s life. 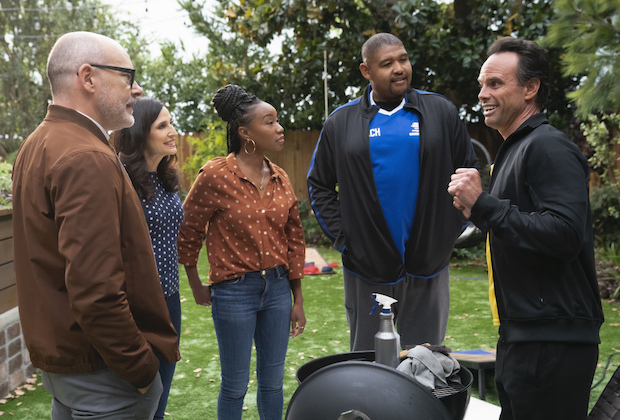 TVLINE | With a full season behind you, how would you compare your Unicorn experience to previous comedies you worked on, like Vice Principals and [Righteous] Gemstones?
The limitations for what you can say on network television — which I at first thought would be claustrophobic — are actually liberating. I absolutely love it. I can’t tell you how gratifying this experience has been for me and how different it’s been for me. And it’s weird, man. Like, I never saw myself in this place, but I just kind of followed the writing. I wanted to do something very specific with this, and so did the writers, and we’ve done that. And [if renewed for Season 2] we have an opportunity to blow this world wide open. Yet the other side of me is the Gemstones. I’m lucky to play in both.

TVLINE | Do you feel like The Unicorn has evolved along the way, or did it know what it was right out of the gate and stay true to that?
I think that the outward perception is that it has evolved, only because people are more familiar with the characters — but that was always built into the story. When we set out to do this, I always wanted it to be an ensemble. When I begged Michaela [Watkins] and Rob [Corddry] and Omar [Benson Miller] and Maya Lynne [Robinson] to be a part of this, I told them that this is not just my story, and you can no way just be in the service of Wade’s story. This is about a group of friends, and it will always be that.

So I think while people may be like, “Wow, it’s kind of opened up,” that was always the intention, and now that we’ve dealt with a chapter of Wade’s grief…. It’s not linear, this experience, but I think that he had to find his own joy again, his own comedy, his own jokes, right? And I think he earned it. He was a straight man for a lot of it because, organically, that’s what he was going through, but you’ll see him now blossom in that way.

TVLINE | Speaking of the cast, you have been in the business for some time. Was there anything left for you to learn from Rob and everybody? Did you pick up anything?
Oh, man, I picked up so much, you know? But look, I’ve been around for a long time, and these guys have been around for a long time, and it’s all about alchemy. How do you, as a writer, approach a subject matter? How do you approach an interview? You have your way of doing it, and the end result might be similar to somebody else’s, but it’s the process for you that makes it your experience, right? And so while I can say that I’m still amazed by watching people like Rob and Michaela, who can turn it on on a dime and read it the night before and become familiar with it, because they come from that improv world, I have to read it over and over again. I have to read it 100 times, while [Righteous Gemstones‘] Danny [McBride] does it in a second.  [The Shield‘s Michael] Chiklis does it in a minute, but Glenn Close doesn’t. Anthony Hopkins doesn’t.

I guess what I’m saying is… we are different, but that’s what makes us so strong. All of these people can have their own show, and they have had their own show. Look at Omar Benson Miller. He can make you laugh, and he can make you cry, and has had a career dedicated to that. He’s a ninja. All of these people are at the top of their game, and at this stage of my life, to go through this experience with them in network television…. That doesn’t happen every day. 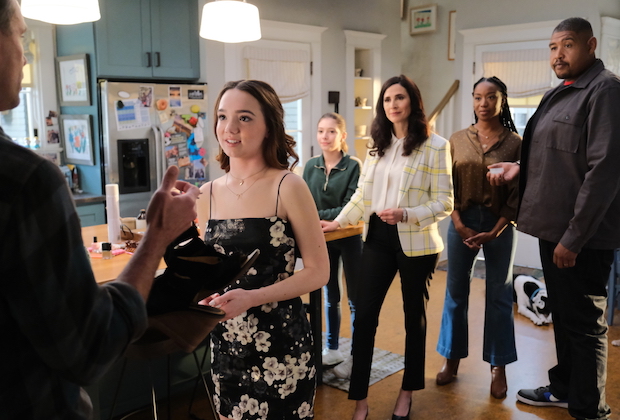 TVLINE | Give us a sense of what’s going on in the season finale. Grace has an important dance to go to… or perhaps not?
I can give you the play by play, or I can say this: I brought a morsel of this story, kind of the spine of the story, to the writers, like, three months ago, because I wanted Wade to have a conversation with Jill, with his wife. I won’t tell you how that conversation happens or in what place that conversation happens, but I needed it, as the person playing Wade, because I’m his biggest advocate.

I needed that conversation to happen. And I wanted it to be a summation of where he is and it to reflect this journey that he’s been on and for it to be something other than what people anticipated. Not just to surprise them — it wasn’t gratuitous — but because that’s really how he feels, and so once we started with that, the writers kind of pulled in everything else. But it was based on what they’re going through in their own lives with their own families. Time is just moving, man. I’ve got a 9-year-old and time is moving, and the world is changing.

TVLINE | You have a very fun guest star there at the end of the season finale. What do you want to tease about that?
You mean, why is Raylan Givens’ ex-wife hanging out with Boyd Crowder? [Laughs] Yeah, dude, I can’t wait to post about that on Instagram. “Look who’s with who now!”

TVLINE | Was casting Natalie Zea (Justified) your idea, or…?
There were a number of names that we kind of put out there — and CBS weighs in a lot, as they should — and as soon as Nat came up, I just said, “It’s her. She’s the one.”

TVLINE | She’s an A-plus comedian, too.
They really loved her. We’ll see if [her character] is a period, or a question mark. You have to watch the show to kind of find that out. But I’ve known Natalie for 12 years now, and I’ve been a fan of hers for longer than that, so to go through this experience with her is really exciting. 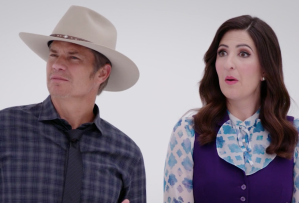 TVLINE | It dawned on me while preparing for this interview that Tim Olyphant’s surprise cameo on The Good Place aired opposite your show in January.
Oh, did it? Just tell me we beat them in the ratings. [Laughs]

TVLINE | You did have a much larger audience.
I’m kidding. But I didn’t know that. I’ve known [The Good Place‘s] Kristen Bell for 20 years, from Season 1 of The Shield. That was one of her first gigs, and we’ve been friends ever since. So when Rob [Thomas] asked me to come on and do this pilot, this presentation for a different Veronica Mars, I went down to San Diego and helped him with that. And I know Ted [Danson] through Mary [Steenburgen], who was on Justified. One big happy family. 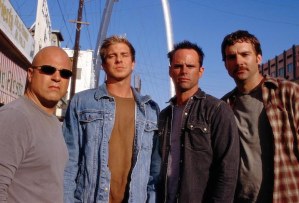 TVLINE | In The Unicorn‘s season finale, one of the characters is trying to binge The Wire, and I thought the reference could have just as easily been The Shield.
I tried to do that! They wouldn’t let me.

TVLINE | Shawn Ryan has been on Twitter promoting that The Shield is now on Hulu, remastered in 4K but still gritty. Is that something you’ll want to check out?
Oh, absolutely — but I’m waiting to watch The Shield again with my son when he gets old enough. He’s 9, so I’ve got about four years. I haven’t watched an episode since it ended, and I won’t watch one again, on purpose, until he’s of age, and then I’m going to sit down and watch it with him — just as Shawn did with his daughter. And I will do the same with Justified, man!