This week on The Flash, Wally West resurfaced to tell fellow speedster Barry a thing or two, while Mirror-Iris struggled to cover her tracks and Nash asked Cisco to help bust a “ghost.”

After making the grandest of entrances — saving the passengers of a sabotaged helicopter by “multiplying” himself, whisking them to safety, and then disassembling the aircraft mid-air — Wally West reunited with Team Flash. During the resulting “Welcome home” party, Mirror-Iris spilled a lotta wine (always a crime!) because Eva’s own hand had gotten shaky inside the mirror realm, after she overtaxed her powers. The STAR Labs party got doubly meaningful when Cisco, though reeking of Atlantean fish, returned from his fact-finding mission across the globe. When Barry and Wally teamed to quickly clean up after the party, Wally realized that Barry’s powers have been on the fritz. Barry shrugged it off, but after a chat with “Iris” (who alluded to a problem Bar had with the Speed Force some months ago), Wally confronted his mentor and proceeded to drop a bomb: the Speed Force is in fact dying. And it’s all Barry’s fault.

Wally managed to bring Barry into the Speed Force, which again is represented by Nora Allen, now dying in her son’s childhood bed. Barry came to realize that when he sought out Spectre’s help to access the Speed Force during Crisis, that mysterious energy form entered the Speed Force and began contaminating it. Later, Barry hooked up a tachyon gizmo to re-enter the Speed Force one more time, where “Nora” bid him adieu and expired. Meaning, the Speed Force is no more, and Barry and Wally only have residual amounts speedster power, to use prudently.

Barry and Wally did just that, carefully calculating the shortest distance to run/phase when a new meta, Turtle 2.0, took Joe hostage at the CCPD. Wally got trapped in one of the meta’s rapid-aging bubbles, but Joe jabbed Turtle 2.0 with Velocity X just in time to offset her powers.

This week’s drama was from over for Team Flash, however….

Nash had asked Cisco to help him deal with what he dubbed doppelganger “survivors” from other Earths, but Cisco was too caught up in whipping up some Velocity X (to deal with the Turtle 2.0 problem). Later, though, Cisco met up with Nash, but it was too late — Eobard Thawne had taken control of Nash’s body, and he was ready to tend to some very unfinished business between him and Cisco. Thing is, Thawne couldn’t vibe his hand while using powerless Nash’s body, so Cisco fended the baddie off best he could until Cecile came from across the hall to taser the attacker. Upon being imprisoned in the Pipeline, Thawne assured Barry and Cisco that he would get free and kill them both, plus allllll their friends and families — especially since Barry’s powers are now on borrowed time, while Thawne is fueled by the thriving Negative Speed Force.

That said, Barry got from Thawne the idea to build his own synthetic Speed Force, with help from Cisco, Caitlin et al. 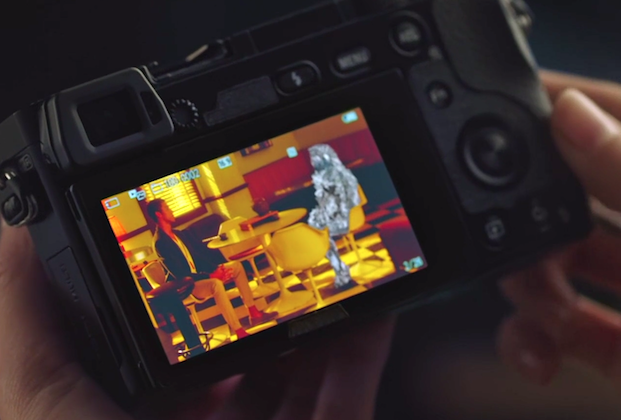 * As referenced up top, Iris observed that if Eva uses her meta powers for too long a time (e.g. to turn the mirror into an eavesdropping device), she gets shaky/starts madly rambling.

* Mirror-Iris was irked when Kamila snapped a photo of her with her brother Wally, and demanded that it be deleted ASAP (for “security” reasons). Mirror-Iris similarly acted atypically when she suggested to Barry that the death of the Speed Force might be a good thing, for them and their life/family. Later, when Kamila regarded the un-deleted pic, we saw that it displayed the faux Iris as an “undetected signature” (above). Alas, “Yeah, I’m Not Iris” just then showed up at the Citizen wielding the mirror gun, which she used to zap Kamila — killing her, or transporting her to the mirror realm, perhaps?

* Before embarking for his next Peace Corps mission, Wally, Buddha bless him, gave Joe a heads-up that Iris is acting strangely/not like herself.

What did you think of “The Death of the Speed Force”?