After a season full of romantic turbulence, The Bachelor‘s Peter finally made his choice and got down on one knee to propose — but it’s never that simple on this show anymore, is it?

As Tuesday’s Part 2 of the finale opens, it seems like Peter’s decision has already been made for him: Madison said goodbye to him and the show in Monday’s Part 1, leaving Hannah Ann as his only remaining option. But even though she doesn’t know Madison has left, she still senses that Peter is not quite sure about her. He talks himself into it, though, and picks up a ring from Neil Lane and calls Hannah Ann’s dad to get his blessing. He’s ready to propose… but Hannah Ann is still stewing about him saying he’s torn between her and Madison. (Plus, in a glimpse at the live show, Chris Harrison points out that booted contestant Kelley is in the audience, along with Peter’s parents, who look none too pleased. Hmmm…) 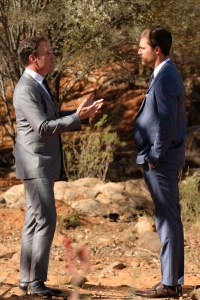 At the final rose ceremony, Peter gets a visit from Chris Harrison, who breaks the news that he’s “not positive” Hannah Ann is coming. Oof. Peter is left reeling — the guy thinks he’s been rejected by both of his final ladies at this point — and lies on a bed while producers try to calm him down. But wait, Hannah Ann is on her way after all! She arrives at the rose ceremony, and a relieved Peter gives her a big hug. (We hear those heartbeats again!) He gives her a tearful speech and reveals that Madison left two days ago — so Hannah Ann wins by default, we guess! “My heart chooses you forever,” he says, and he assures her he loves her before getting down on one knee to propose. And she says yes! It seems like a happy ending… but as Chris Harrison reminds us, there’s way too much show left for this to be the end. (They keep showing Kelley in the crowd, too…)

We see Peter tell his family about the proposal — his mom sobs, of course — and Chris Harrison brings him out live for a few softball questions. But then the bad news starts to trickle in: A month after taping, Hannah Ann comes out to visit Peter in L.A., and she still doesn’t seem completely sure about how he feels. He admits he’s been “struggling,” before he casually mentions that he “[gave] his heart to two people” (!). He apologizes that he can’t give her his whole heart right now, but she’s just about had it: “You took away from me my first engagement,” she says before storming off. “I said yes, and I get this?” (They keep showing Peter’s mom in the audience, just to twist the knife further.) Hannah Ann accuses him of “not being true to his words” and ultimately pulls away: “I don’t need anything more from you. You’ve done enough damage.” She hands him his ring back and walks out after he admits he “betrayed” her… and Peter’s own mom claps for her! (Quick, somebody get her a #TeamHannahAnn T-shirt.) 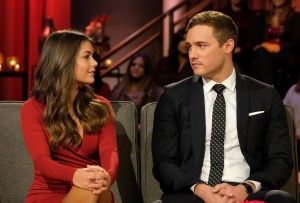 On the live show, Hannah Ann comes out to see Peter for the first time since the breakup, and she’ll only give him an awkward side hug. She chides him for leading her on, and says he even reached out to her parents after they broke up, saying he wished they hadn’t met on reality TV. (Right, dude, like it’s reality TV’s fault.) He stammers to apologize, but she hammers him for not telling her what was really happening with Madison: “I had no idea what I was saying yes to.” She wishes she would’ve seen a red flag earlier when he said he needed closure with Hannah Brown: “Really, our engagement involved three women” (!!). She concludes by advising Peter that, to be with a real woman, he needs to “become a real man” — and again, applause from his mom!

Meanwhile, we know damn well that Madison is still lurking out there, and sure enough, Chris Harrison goes down to Alabama to check in on her. She talks about how hard this has all been on her — while Peter’s mom rolls her eyes! — and when Chris asks if she regrets what she did, she says yes. He tells her that Peter and Hannah Ann got engaged… but they split up: “He ended his engagement because of his feelings for you.” (No, Hannah Ann dumped him, Chris, but whatever.) Madison says she’s open to “a second chance,” so she jets off to L.A. and drops in on Peter for a quick chat. She says the way she felt about him “has not gone away at all,” and she still has “so much love in my heart for you.” (There’s that heartbeat sound effect again.) He admits he made “a million and one mistakes” — uh, ya think? — but he fell in love with her, and he’s still in love with her. “So what do we do?” he asks. 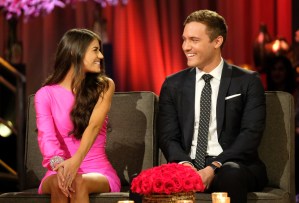 Back on the live show, Peter tells Chris that he’s in love with Madison, and when they bring her out live, she and Peter are all smiles. (Peter’s mom, however? Is not.) She rambles about how all those old feelings are still there, but when Chris asks what’s next, Peter isn’t ready to propose (again): He says they’ll just take it “one day at a time.” Chris checks in with Peter’s mom, who says things were rocky right away with Madison because she made them wait “three hours” (!) in Australia and then told her she wouldn’t accept a proposal from Peter in four days. Peter asks his family to give her a chance, but his mom really isn’t onboard, and she and Madison low-key bicker (again) before his mom declares that everyone in Peter’s life knows that “it’s not going to work.” (Even his dad points out how his son and Madison have “so many differences to overcome.”)

Chris Harrison tries to put a happy bow on this mess, but man… that first Weber family dinner is going to be awkward, huh?

Alright, Bachelor Nation, now it’s your turn: What should Peter have done? Vote in our poll, and then hit the comments below with your post-finale thoughts.