Black Lightning and his superfriends/family fought a battle on multiple fronts in the CW series’ Season 3 finale. Once the dust cleared, who didn’t make it out alive? Who landed in a coma? And who was left for dead?

To recap: After besting (and nearly microwaving!) Black Lightning while his men hauled a KO’d Jennifer away, Gravedigger made a beeline for The Pit. And though Erica, Gardner and some scrappy Freelanders attempted to guard the facility’s entrance, Gravedigger easily “pushed” them all to sleep and marched his way inside. Out on the streets of Freeland, Lala proved to be a bit of a hometown hero, arriving with his gang in time to help Henderson and the PD mow down many Markovian soldiers. When Black Lightning arrived outside The Pit with Jennifer, whom he had rescued from a meta-dampening cell, he landed in a Markovian soldier’s crosshairs. But Henderson, staked out in the woods, took out the gunman along with several others. One soldier, though, got off a final, fatal shot at the lawman, who veritably died in Black Lightning’s arms. 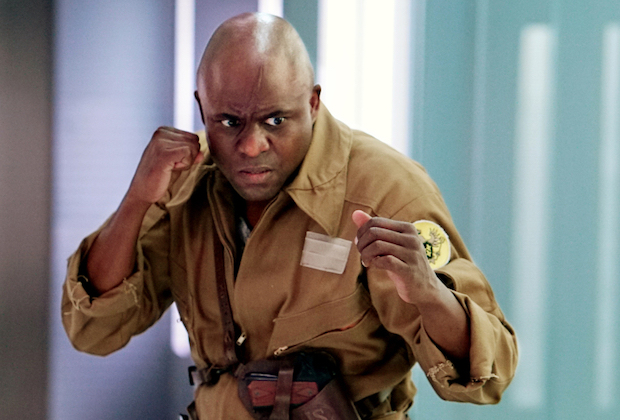 Inside The Pit, Gravedigger first faced off with Thunder, until he ordered Grace to “kill” her girlfriend and the ladies got embroiled in their own scuffle. Gravedigger next met up with Lightning and Geo, who combined their powers to bombard him with “volcanic lightning” — but as nifty was it was, it was not enough. Lynn meanwhile ran up against the ASA’s Commander Williams, who had orders to destroy all classified data — including that which resides inside the heads of Drs. Jace, whom he had already killed, and Stewart. Lynn deflected his gunshots with a lingering bit of meta power, and then slugged him good, before dashing out of the lab with a rifle loaded with anti-booster.

Black Lightning got his rematch with Gravedigger in the hallway, yet once again fell short of beating the baddie. Gravedigger went in for the microwave-you-from-the-inside kill when Lynn unloaded a spray of anti-booster into his back. Rendered powerless (at least for now), Gravedigger proved no match for Black Lightning, who used a lasso of electricity to yank his foe into the mother of all clock-cleaning clotheslines. Agent Odell, meanwhile, had set The Pit on self-destruct mode, giving Lynn and Jefferson just one minute to fly out to safety — though it meant leaving KO’d Gravedigger behind to die. Moments later, boom! went The Pit, with the meta kids huddled safely inside a nuclear holocaust-proof safe room within.

Back in Markovia, we saw Tobias enjoying a home-cooked meal from his Ma while plotting his return to Freeland to claim the “crown” that is rightly his. The TV, meanwhile, broadcast coverage of a senate hearing in Gotham City, where Lynn (still secretly popping the Green Light) had her plan for a metahumans “boarding school” ratified. Black Lightning, alongside Thunder and Lightning, was next to testify before the committee, and he detailed how the decades of experimenting on Freelanders was but the latest in a line of similar ignominies visited upon Blacks in U.S. history. He then turned over the briefcase containing the ASA’s master plan, before the senators cleared the hall for the heroes’ exit from the building.

Also exiting the hearing was a pasty ol’ white dude, whom we discovered was a shapeshifted Gravedigger, alive and well and clearly powered back up!

* Major Gray struck a deal with Lady Eve for the briefcase, but when the crime queen realized a double-cross was afoot — the government aimed to nuke Freeland if Markovia took control — a gunfight broke out, with both women getting winged.

* Painkiller at one point was poised to take out Jennifer and Jefferson, until Khalil lured him into one last brutal brain brawl, and emerged triumphant. Later, against Jefferson’s wishes, Khalil put a couple of bullets into Agent Odell — though only into his spleen. The rest, he sniffed, is in God’s hands.

* Gambi, with TC’s help, laid to waste the last band of ASA goons who knew the Pierces’ secrets, as they stormed his shop, guns a-blazing.

* Lynn reported to a bereft Anissa that Grace was comatose following the girls’ clash inside The Pit, and needs to be sent somewhere for full-time care.

What will Season 4 look like? As seen in the finale-ending slow-motion walk, is the Pierce family, three seasons in, now stronger than ever?

“That’s a tough question. I’d say yes and no,” series lead Cress Williams tells TVLine. “Like, they’re together, and they’ve overcome a lot, but I think Lynn still holding onto the secret that she still hasn’t killed the drug habit yet is definitely going to be an issue.”

Williams, for one, is glad that it still will be an issue, hard as it might be on his TV fam. “I’m kind of happy it wasn’t just wrapped up and she’s suddenly cured, because addiction doesn’t work that way. It should be a harder road,” he notes. “It’s a messy thing, as anybody who has dealt with addiction knows, so there will be some push and pull. Two steps forward, three steps back” in Season 4.

Meanwhile, on the archenemy front, “We don’t know about Tobias and where he is,” Williams points out, “and then the ultimate thing is that we don’t know that Gravedigger is still around. The fact that he is hidden and still around, those are going to be the real linchpins of next season.”