Quibi (which is short for “quick bites”!) will launch on Monday, April 6, with a total of 50 programs — including four “Movies in Chapters,” a slew of “Daily Essentials” and Chrissy Teigen wielding a gavel.

Quibi has also announced that it will offer 90-day free trials for a limited time; otherwise, the monthly price point will be $4.99 with ads and $7.99 without. All told, Quibi is promising to release 175 original shows and “8,500 quick bites of content” in its first year alone.

♦ Movies in Chapters aka “big stories told in chapters that are 7 to 10 minutes in length.” 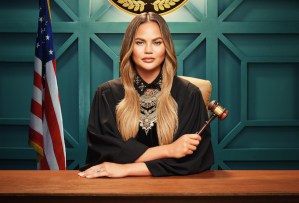 ♦ Unscripted and Docs covering food, fashion, travel, animals, cars, builds, music, sports, comedy, talk, variety, documentary and more, all with episodes running 10 minutes or less. Among them is Chrissy’s Court, in which Chrissy Teigen “reigns supreme as the ‘judge’ over small claims cases” while her mom/“bailiff,” Pepper Thai, maintains order in the courtroom.

The “Movies in Chapters” that will be available at launch are as follows: 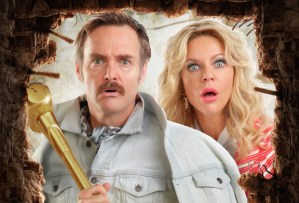 Flipped
Jann and Cricket (played by Will Forte and Kaitlin Olson) think they have what it takes to become TV’s newest house-flipping couple. Unfortunately, a Mexican drug cartel thinks so too. Now the delusional duo has to survive their newest project — renovating the cartel’s mansions.
Also starring: Arturo Castro, Eva Longoria and Andy Garcia (watch trailer)

Most Dangerous Game
Desperate to take care of his pregnant wife before a terminal illness can take his life, Dodge Maynard (played by Liam Hemsworth) accepts an offer to participate in a deadly game where he soon discovers that he’s not the hunter… but the prey. This dystopian action-thriller explores the limits of how far someone would go to fight for their life and their family. Let the games begin.
Also Starring:​ Christoph Waltz, Sarah Gadon, Zach Cherry, Aaron Poole, Christopher Webster, Billy Burke, Jimmy Akinbola and Natasha Bordizzo (watch trailer)

Survive (based on the Alex Morel novel)
Jane (Game of Thrones‘ Sophie Turner) wants to end it all. Then a plane crash almost ends it for her. Now she’s crawling from the wreckage with the only other survivor (24: Live Another Day‘s Corey Hawkins) and a new drive to stay alive. Together they embark on a harrowing journey out of the wilderness, battling brutal conditions and personal traumas in this thrilling drama. (Watch trailer)

When the Streetlights Go On
After the murder of a beautiful young girl rocks a suburban community, the victim’s sister and her high school peers must struggle to find a sense of normalcy while coming of age in the midst of the murder investigation.
Starring: ​Chosen Jacobs, Sophie Thatcher, Sam Strike, David Lewis, Mark Duplass, Cameron Bancroft, Tony Hale, Beh Ahlers, Kristine Froseth and Queen Latifah

Does any of the above tempt you enough to grab a Quibi/quick bite?