This week’s Star Trek: Picard was a lovely stroll down memory lane for Next Generation fans, as Jean-Luc sought the counsel and companionship of his old Enterprise pals Will Riker and Deanna Troi.

After Jean-Luc and Soji zap through that transporter portal thingie on the Borg cube, they find themselves on the idyllic planet of Nepenthe, where they’re quickly greeted by a young girl pointing a bow and arrow at them. Jean-Luc addresses her by name, though: She’s Kestra, the daughter of Riker and Troi. He reassures Soji that they’re here to see “old friends,” and they approach a majestic cabin in the woods where Troi is out gardening. She welcomes Jean-Luc with a big hug, but she can sense it: “You’re in trouble.” (She is an empath, after all.) Riker is busy making pizza in the kitchen, and he can see that look in Jean-Luc’s eyes, too: “You need a place to hide out.” 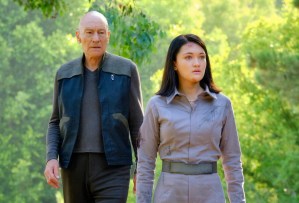 Soji is still wary, though: She bristles when Kestra suggests she might be an android, and is still reeling from the knowledge that her entire life has been a lie. But she soon bonds with Kestra, who has a million questions about how human Soji is. (Yes, she has mucus.) Meanwhile, Troi gives Jean-Luc a tour of her son Thad’s room, where the boy invented a host of languages — but we learn that Thad died of a rare silicone-based virus that might’ve been cured… if not for the ban on synthetics. (They came to Nepenthe in an effort to treat his illness; the soil there has regenerative properties.)

When Riker sees Soji tilt her head in a very Data way, he also guesses she’s related to their old android shipmate. Soji samples a fresh, non-replicator tomato while telling Troi about Narek and his betrayal, and angrily declares she doesn’t trust anyone anymore. She shoves Picard out of her way, but he knows she didn’t mean any harm: “She could’ve broken me in half.” At dinner, Soji admits she’s yearning to go back to her home planet, i.e. the one with two blood red moons and a sky full of lightning. Picard pledges to help her get there, and Kestra manages to use that information to locate the planet. It doesn’t have a name — just a number.

Jean-Luc and Riker take a wistful final walk in the woods, sipping tea and talking about Jean-Luc’s “decidedly motley” new crew. Riker reminds him that he’s earned the right to sit back and watch his grapevines grow… but he also knows Picard too well to try and talk him out of anything: “That, my friend, was always a losing proposition.” Jean-Luc and Soji say a tender goodbye to Riker and Troi — Kestra gives Soji her compass to remember her by — before they beam up on their way to find Soji’s true home. 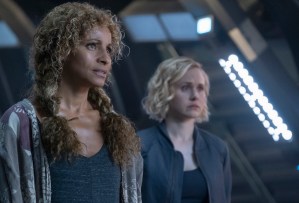 Elsewhere in “Nepenthe”: Raffi and Rios struggled to escape Narek, who was following close behind them in a ship, thanks to a tracking device Agnes ingested back at Daystrom. A guilty Agnes threw up some red velvet cake before replicating a tool and firing it into her own neck, sending herself into a coma (!). Plus, back on the Borg cube, Hugh and Elnore teamed up to fight off Narek’s sister Narissa and a bunch of Romulan guards… until Narissa flung a blade into Hugh’s neck, killing him. (Elnore’s still stuck on the cube, it looks like, so let’s hope Rios can swing by and pick him up by season’s end.)

How’d you like that blast from the Next Generation past, Picard fans? Beam down to the comments to share your thoughts on tonight’s episode.