A seedy corporation trying to change the world? An unethical CEO with questionable motives? Check, and check!

For anyone who’s seen Annihilation or Ex Machina, you know exactly what to expect from writer/director Alex Garland. His mind-bending fiction questions morality, technology and humanity, pushing the envelope for the science-fiction genre and incorporating advancements we laymen can only dream of.

With Devs, his new FX on Hulu miniseries — the first two episodes are now streaming, the following six will roll out weekly on Thursdays —, Garland examines “the illusion of free will” as it relates to the doctrine of determinism, transferring his cinematic sci-fi/mystery blend to a serialized format. Philosophy aside, the tech-thriller follows a computer engineer investigating a quantum computing company she believes is responsible for her boyfriend’s disappearance.

Plus, Parks and Recreation alum Nick Offerman has cool hair and may be a supervillain.

Lily (Maniac‘s Sonoya Mizuno) and Sergei (Gypsy‘s Karl Glusman) are the young couple in question, both working for a tech company called Amaya. When Sergei gives a presentation — his team is able to predict the exact behavior of a living organism — he impresses his boss Forest (Offerman) and colleague Katie (Alison Pill). Before he knows it, he’s offered a new position, starting immediately, in a peculiar new department called Devs.

Since the department is so mysterious, Sergei assumes it’s related to national security or biotech. Wrong. He and Forest walk through the woods and arrive at a huge concrete building with Faraday cages and a vacuum-sealed air gap. It looks like something right out of Blade Runner 2049… or a Garland film. Inside, the compound’s gold-plated walls scream “Zelda temple,” especially as the men float inside a glass-encased cube that transports them to its core.

There is one rule: They take nothing in or out. But all of the company’s code can be accessed inside, since there are no passwords. Sergei asks what he should be doing, and Forest says he isn’t going to tell him. “Take your time and don’t worry, you’re going to figure it out. I know you are,” he says. Riiight. Just a normal day at the office. A golden, futuristic, tesseract-shaped office.

Yeah, I don’t understand what is going on either.

Sergei leaves through the woods and Forest confronts him, explaining the relationship between causes and effects, and the deterministic nature of the universe. He accuses Sergei of stealing the code on his watch. “You made no decision to betray me. You could have only done what you did,” he says. Sergei, shaking like a leaf, decides to book it, but before he can escape, a man pops out and suffocates him with a plastic bag.

When Sergei doesn’t come home, Lily panics. Amaya’s Kenton shows her footage of Sergei leaving Devs, but we know damn well he never made it that far. Lily tells a friend the video was strange. His gait was purposeful, “like a zombie.” Forest gives her his personal guarantee that he’s going to get to the bottom of this.

Back at Devs, Forest looks distraught, sorrowful. Katie monologues about unraveling a lifetime of moral experience and unlearning truths. “It’s like whatever we know, the things we feel are still locked inside us,” she says. She attempts to comfort him, but he still looks as if he’s about to cry. Maybe he’s not so villainous after all. Maybe Amaya is out to change the world. But do good intentions justify murderous actions?

Later, Lily is shown horrific surveillance footage of Sergei lighting himself on fire. She runs out of the room in tears and runs to see Sergei’s body on the ground, burnt to a crisp. A remorseful Forest stars out his window, eyes heavy with worry. 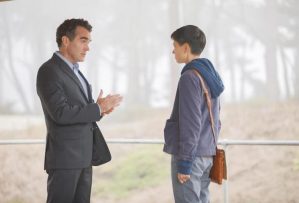 In Episode 2, Forest shares with Lily that he lost his daughter, Amaya (hence, the company name). He tells her he’s there to support her and that her job is secure for as long as she needs it. If only he wasn’t the head of a super shady and probably-evil-doing tech company, I’d almost take Forest for… a nice guy?

Lily struggles to gain access to Sergei’s cell phone. Her first attempt to get her ex-boyfriend to help failed. She tries again, this time telling Jamie about Sergei’s tragic, fiery death. She only has one try left to crack the password or the phone will wipe. Jamie finally agrees. Lily’s hunch about an odd Sudoku app checks out; it’s actually a Russian messaging app. Jamie guesses Sergei was a spy conducting industrial espionage. He resets the password for her.

Kenton tells Forest that the police believe the death was a suicide so, “this is over… except for the girl.” He also wonders why Forest, who has “more money than God,” lives in such a tiny, unassuming house. Likely, it’s the house his daughter grew up in; we catch glimpses of a little girl’s room looking tidy and unused.

At Devs, Katie takes offense when Stewart calls the company code “baby.” As they look up at a large screen, the code morphs into images that look like Jesus’ crucifixion. The picture is fuzzy and seems to be morphing. What it is exactly, we can’t quite tell, but the look on their faces is one of amazement.

Lily opens the messaging app and types “Meet,” and someone responds, “Who are you? Is this Lily?” Shortly after, she receives a time and location, and seconds later the entire message self-destructs. She shows up to the meeting spot to find a man named Anton who works for Russian intelligence. He says he wants to protect her, and that Sergei had a good reason to do what he did. Anton has no doubt Sergei was murdered. Sergei’s job was to infiltrate Devs, something happened, and he was killed, says Anton. If that answer is sufficient for her, she can walk away; if not, she has to work with him. Before he leaves, he tells Lily what to do if she wants to contact him again (he knows where she lives, so they can communicate via objects in front of her window). Across the way, Kenton watches them like a hawk.

Stewart wants to celebrate Devs’ achievement, but his colleagues hesitate. Forest and Katie know their work isn’t done. Forest asks for a moment alone with the projection monitor. He types something into the computer and pulls up a fuzzy picture of a little girl blowing bubbles. We can only guess this is his precious Amaya and that this project must have something to do with his (possibly) dead daughter.

Kenton finds Anton in a parking garage and tells him he knows he tried to get Sergei to conduct espionage, but it’s not going to work with “the girl.” “One professional to another, can you let this go?” Kenton asks. Anton calls him out, saying, “You don’t care about the girl, you’re just using her as leverage. Then your strange private tech company can continue its strange private project totally unobserved.” The men’s “no BS” conversation ends with Anton stabbing Kenton, but Kenton wins the battle. He snaps Anton’s neck against a car tire. Elsewhere, Lily displays a sign outside her bedroom window with a message Anton will never receive: “F–k you.”

Is Amaya trying to predict the future, prove God exists… something else? Grade the premiere episodes, then drop all your theories in the comments below!