You could easily watch a few scenes from Little Fires Everywhere, with Reese Witherspoon starring as a tightly wound mom ruling over a rich suburb, and get fooled into thinking you’re watching a new season of Big Little Lies. But trust me: You’re not. Hulu’s adaptation, which debuts Wednesday, March 18 (I’ve seen the first three episodes) is a resounding disappointment, considering the star power behind it — a flat, formulaic melodrama that hits all the wrong notes. It’s almost a case study in a good book adaptation versus a bad one. Little Fires is like a photocopy of Big Little Lies made on a faulty copier that’s running out of ink: The basic shapes are there, but all of the detail and shading is missing.

Like Big Little Lies, Little Fires Everywhere starts with a mysterious crime and works backwards: We see a huge fire engulfing the lavish home of Elena Richardson (Witherspoon)… but who started it? The unquestioned queen bee of a mid-’90s Ohio suburb with impeccably manicured lawns, Elena is (of course) an overbearing, Type A Mother of the Year candidate, the type who only has sex with her husband on pre-approved days. (“It’s so much more fun when we plan it,” she tells him with a smile.) Witherspoon is always great — she probably should have an Emmy for Big Little Lies already — but frankly, she could do this kind of role in her sleep by now. She might as well be playing BLL‘s Madeline McKenzie here… except with all the nuance drained out of her. 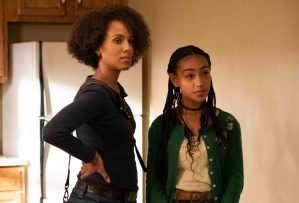 Scandal alum Kerry Washington co-stars as Mia, a single mom new to town who’s living out of her car with her teen daughter Pearl (Lexi Underwood). Elena bends over backwards to help Mia out of a sense of white guilt, and we can sense a uncomfortable tension between them, but their relationship never produces the type of dramatic sparks we see on BLL. Mia and Pearl have a sweet bond, and Mia is clearly haunted by her murky past — but as a character, she’s a total enigma. We’re never given proper insight into what she really thinks and feels; when she suddenly lashes out at Pearl, it comes from out of nowhere.

The scripts awkwardly circle around issues of race and class in a very ham-handed fashion. (The series is set in the ’90s, but it often feels like a ’90s throwback, too, in the worst way.) The themes are applied not with a fine brush, but with a sledgehammer. The dialogue is uninspired and riddled with clichés. (Elena’s sullen teen daughter Izzy, played by Megan Stott, mutters bon mots like “The world is bulls–t.”) The characters are too thinly sketched to embrace: As Elena’s husband Bill, Joshua Jackson is stuck playing a stock husband, with no discernible personality of his own. All of the yelling and domestic strife verges on melodrama, and it ends up playing like a low-grade Lifetime movie. 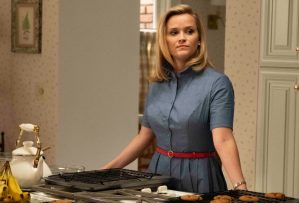 I haven’t read Celeste Ng’s original novel, so I can’t speak to its quality, but if it had any fresh characterizations or perspectives to offer, they didn’t transfer here. There’s a twist at the end of Episode 3 that does add some mild intrigue, but even that is clumsy and overwrought. Pearl stands out as the only character with any warmth or dimension; I’d like to see what Underwood could do with a stronger role. But even veterans like Witherspoon and Washington struggle here. Little Fires Everywhere, I realized, must be what watching Big Little Lies is like for people who don’t like Big Little Lies. In my eyes, though, that show managed to find a way to elevate this kind of soapy, pulpy material into something great. Little Fires Everywhere, sadly, does not.