Several relationships were turned upside down during Good Trouble‘s Season 2 finale on Wednesday.

Let’s start with Mariana and Raj: She confessed to having feelings for her boss Evan, while he fessed up about Isabella — but unlike his girlfriend, Raj wasn’t sure that he didn’t want to have feelings for someone else! With her relationship status extremely unclear, Mariana took out her anger on Isabella, before musing that maybe she was being too hard on her. That’s when Davia piped up to reveal what Isabella had written on her secret confession at the Trap Heals event: “I’m sorry I had sex with my roommate’s boyfriend.” That was enough to send Mariana running into Evan’s arms. As India.Arie’s “In Good Trouble” played, the two kissed and undressed, taking their working relationship to the next level.

Meanwhile, Callie chose to do the right thing for the class-action lawsuit tenants, which meant betraying her boyfriend Jamie. When he found out what she had done, they both agreed that she should move out of their apartment. Elsewhere, Dennis told Davia that he loves her, Malika found out she’s going to trial and Alice finally spoke out against Lindsay.

Below, executive producer Joanna Johnson weighs in on Mariana and Evan’s surprise hookup, Isabella’s suspect confession, Callie and Jamie’s future, and much more.

TVLINE | Because you’ve done fantasy sequences before on the show, I have to ask: Did Evan and Mariana definitely, really have sex?
Oh yeah, absolutely. I wouldn’t leave the finale on a false note.

TVLINE | So did she go to Speckulate after finding out about Isabella’s confession, with the hope of running into Evan?
Yes. You can tell by the way she’s dressed. She may have even texted to find out [if] he was still at work.

TVLINE | I did wonder when she changed into that outfit, with the heels and silky skirt. I was like, “Wait, was she wearing that in the last scene?”
No, she changed. I think she felt so hurt by Raj that it gave her permission to do something she’d been wanting to do, but holding back on. I guess she figured, “Why should I hold back anymore?” It’s kind of revenge sex in a way.

TVLINE | She previously told Evan that she wouldn’t act on her feelings for him, even if she wasn’t with Raj, because he’s her boss. Did what happened with Raj overpower her feelings about not crossing that line?
Yeah, it did, and I think she wasn’t really thinking soberly in that moment, which is something we’ll pick up on in Season 3, the morning after, and you’re like, “Oh, what did I just do?” 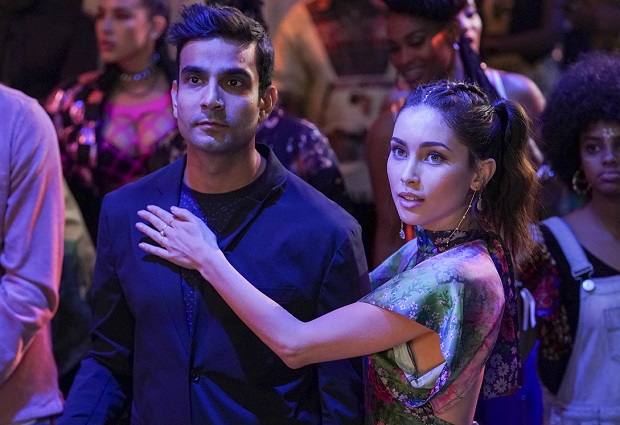 TVLINE | Raj telling Mariana that he’s not sure that he doesn’t want to have feelings for Isabella surprised me.
Well, they’ve developed this relationship, and [Isabella is] so supportive and there for him all the time, and Mariana is really wrapped up in her app. I think he started to have feelings for Isabella, and Isabella, certainly, I think encouraged him in a friendly way. She’s very damaged, and she just wants everyone to like her. And so she doesn’t know how to respect boundaries. I don’t think she wants to break up Raj and Mariana, but she so desperately needs to be liked that she’s definitely given Raj some signals that he’s interpreting as interest.

TVLINE | Was what she wrote on that confession the truth? Was she lying? Was she trying to manipulate the situation?
Well, that is something that you have to wait for Season 3 to find out. [Laughs]

TVLINE | Moving on to another couple going through turbulent times: Are Callie and Jamie officially broken up?
That’s sort of the question for the premiere of Season 3: Are they really broken up? It’s definitely pending. I don’t think it’s clear yet. 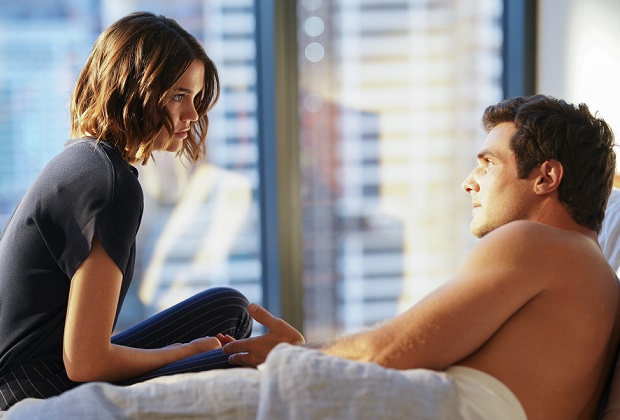 TVLINE | Given the good-natured vibe of that pool scene between Callie and Gael that echoed the pilot, can we safely assume that they’ve gotten past their fight and have forgiven each other?
Yes.

TVLINE | What is that relationship going to look like now? Are we going to see maybe a rekindling of a romance? Or is it just strictly friendship?
That’s always the question. They certainly have chemistry, and that’s another question that we will answer in the [Season] 3A premiere: what happened after he got out of the pool, and what’s going to happen with them going forward. 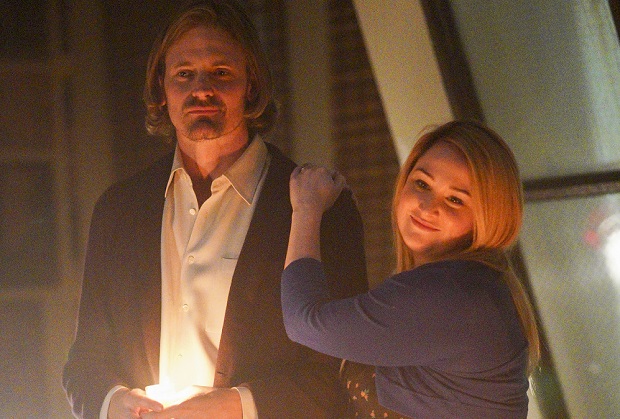 TVLINE | I was so excited for Dennis to tell Davia how he feels about her, finally. What was the thing that convinced him this was the right moment?
Her being there for him after Trap Heals, when he realizes he’s got to face some of the stuff with Jacob, and he sings the song for her, and Gael comes up with that idea to transform the photograph on his wall into something kind of beautiful… He’s ready to try to move forward. He was gonna do it, and then he got scared by what the group therapy said, and he just feels like, “No, I know. I’m going to trust myself now. I’m ready to go forward.”

TVLINE | It was so nice to see Alice stand up for herself with Lindsay. What’s next for her in her personal and professional lives?
She’s got this audition coming up for this diversity comedy program that could be really good for her career. For Alice, her story has been and continues to be [about] trying to find her voice and use it, which is a struggle that everyone has in their twenties and beyond. But I think it’s particularly prevalent in your twenties, [when] you’re trying to figure out, “Who am I? What do I want to be? What is my career? And how do I get to where I want to go?” It’s really been a struggle for her, as well as relationships, too.

TVLINE | How is Malika going to handle her uncertain future next season?
She’s gonna try to stay positive and not give up, and, hopefully, win this trial or get out of this predicament that she’s in. [She’s] also still dealing with growing her relationship with Isaac and other relationships, and also finding some joy, too, and lightness, along with the activism and the tough stuff in her life.

TVLINE | How long have you been waiting to use that song “In Good Trouble”?
[Laughs] A long time! Zuri [Adele], who plays Malika, sent it to me in Season 1, and I’ve been holding on to it for the right time, and it was perfect. I loved it.

Good Trouble fans, what did you think of the season ender? Grade it below, then hit the comments!