The following post contains spoilers for Tuesday’s episode of The Resident.

The Chastain Park Memorial docs might want to get acquainted with Pinterest, because they’ve got a whole lot of wedding planning ahead of them.

Tuesday’s episode of The Resident delivered not one, but two engagements for the hospital to celebrate: First, Irving popped the question to Jessica, with the help of his fellow doctors and a well-memorized Shakespeare passage. Then, at the end of the hour — in a slightly more spur-of-the-moment proposal — Conrad got down on one knee and asked Nic to marry him, and she gave an enthusiastic “yes” before he could even finish the question.

Of course, viewers have known for weeks that Conrad planned to propose to Nic. In the season’s 10th episode, Conrad revealed to Devon that he’d bought an engagement ring… but the grand gesture was postponed by Conrad’s abrupt firing from Chastain, and the topic wasn’t revisited much until Tuesday’s installment, when Nic suggested that marriage would be “the logical next step” for their relationship.

“What matters is that we just keep trying to make each other better,” Conrad countered. “What matters is that we belong together.” And with that, he pulled out the ring that had been sitting in his coat pocket for weeks, and Nic assured him that “I have never been so sure of anything in my life” as she was about accepting his proposal.

Below, leading man Matt Czuchry offers his thoughts on the way Nic and Conrad’s proposal unfolded, as well as some teasers about the Chastain-Red Rock showdown that will bring the season to a close.

TVLINE | Did you and Emily VanCamp have any heads-up from producers that the engagement would happen in this episode? Or was it a surprise when you read the script?
It came as a surprise [to me] that it was in Episode 16. When I read the episode, it’s packed full with so much. You have the Irving and Jessica proposal, you have the Conrad and Nic proposal, you have the Devon and Princess Nadine ball, you have Mina and the Raptor and their relationship. It felt more like a season finale than Episode 16, so I was surprised by that. I was surprised that it didn’t come later in the season, and I was additionally surprised that it was so packed with so many of these personal relationships coming to a head.

TVLINE | Conrad and Nic’s relationship has been so crucial to the show that I assumed their eventual engagement would be something big and elaborate. Did you expect that, too? Were you bummed at all not to film a more over-the-top proposal?
In Episode 10, I felt like we planted the seed with Conrad having the ring and carrying it in his pocket for weeks. For me, that showed a different side to that character, because he’s often someone who’s quite rash, especially in his professional life. In terms of the proposal itself, oftentimes what you feel is the right time doesn’t turn out the way you expected it to be, and that’s what makes it perfect. That proposal is unique to Conrad and Nic in that way, with Conrad saying, “Hey, you gave me chickens.” [Laughs] That’s very specific to Conrad and Nic, and that’s what made that proposal special for me — the combination of Conrad being so thoughtful and waiting for the right time, and the right time just happened to be something he didn’t plan. 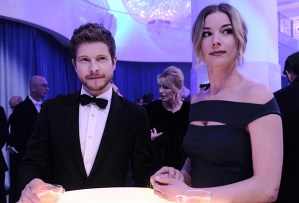 TVLINE | Across these three seasons, we’ve seen Conrad become much more vulnerable with Nic — but he’s also had some commitment and communication issues in the past. Now that they’ve taken this step, will any of those problems resurface for Conrad?
If you look at what they’ve experienced this season — Conrad getting fired, Nic’s sister passing away, Nic’s father [contemplating suicide] — they’ve gone through these extremely difficult times this season, and they’ve gotten through it together. Their relationship is in quite a different place than it was in Seasons 1 and 2 — but also individually, those characters have grown and changed. There’s always going to be obstacles in the way, but I would say those obstacles wouldn’t be something from the past; they would be new, present-day obstacles. And I think that reflects true life. When you think about the relationships you’ve been in, the more difficult things you go through define you and change you. That’s what’s nice about this season. It reflects real life in terms of how we grow together and how we grow apart, even in extraordinarily difficult situations.

TVLINE | Let’s talk about Red Rock Mountain Medical. Conrad is back at Chastain now, and Logan Kim is backing off a little bit, but I assume a big showdown is coming. What can you tease about that?
We really start to get into that around Episode 19. I’ve read Episodes 19 through 21, and we’re filming Episode 20 now. All of these threads are coming together in a very unique way. What I’ll say is, something happens in the hospital that is a challenge for Chastain in general, and as a piece of that, Conrad is forced to make certain alliances with doctors he had previously avoided. That’s what makes this last chunk of episodes unique. They’re collectively facing this challenge that, as a hospital, they’ve never had before.

TVLINE | Is there any part of Conrad that’s a little bit gun-shy to go up against Red Rock? He’s not one to back down from a fight, but he did get fired not too long ago.
It does affect him, and that speaks to the uniqueness of the end of the season. Those alliances that he has to make with certain doctors — he has to find a unique way to come at the system, because he was fired. That’s what’s really exciting, that change in Conrad. He still wants to come after the system, but he has to do it in another way because of what happened — just like how he had to get back into the hospital in Episode 13, when he had to use that soccer team and pit another hospital against Chastain to get back to Chastain. That was something he’d never had to do before, and it’s the same with this. He’s faced with a situation that causes him to make different alliances that he would rather not choose.

The Resident fans, were you similarly surprised that Conrad and Nic got engaged before the season finale? Give us your thoughts in the comments!