When it was announced that Grey’s Anatomy and Station 19 were switching time slots, in part to facilitate more crossovers, I’ll admit I groaned. I even did it in print. Like many a Grey’s viewer, I felt like I wasn’t being invited or encouraged to tune in to its spinoff so much as I was being forced. Making matters worse, my reaction to the little bit of Station 19 that I’d already seen (back in Season 1) had been, at best, lukewarm.

But I’m as happy as a firefighter on a pole day to now have hose to down my outrage, because somewhere along the line — perhaps when Grey’s showrunner Krista Vernoff took over the offshoot? — the show caught fire. So when I restarted watching with the Season 3 premiere, lest I miss some key Grey’s plot point, I kinda dug it (truth be told, minus the “kinda”). 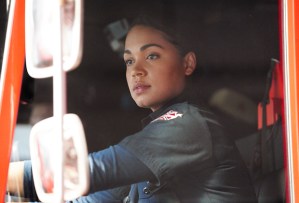 At first I thought maybe I was just enjoying it more these days since, between Station 19 samplings, Grey’s had tricked me into getting to know and adore a couple of the spinoff’s first-responders: charisma machine Barrett Doss’ Vic (who’s done wonders for Jackson post-the Maggie debacle) and Okieriete Onaodowan’s Dean (who’s as lovable as a teddy bear with biceps the size of soccer balls). That isn’t why I’m suddenly so hot for the series, though. At least it’s not the only reason.

Tepid storylines like the Jack/Andy/Ryan triangle are dead and buried (as is Ryan). In their place are plots that blaze more intensely, like the thwarted attraction between Andy and Sullivan (which allows Jaina Lee Ortiz and Boris Kodjoe to set off smoke alarms every time their characters trade glances), and Jack’s ill-advised fling with his nemesis’ wife. And the imminent demise of Andy’s father, the firehouse’s revered former captain, promises to be a three-Kleenex affair, especially if Andy learns beforehand that Pruitt called Ryan home to Seattle and his early grave.

Heck, the show has even figured out how to play Danielle Savre’s freshly-promoted Maya as a hard-ass instead of hard-to-like; her budding flirtation with Grey’s Carina is sure to further help in that regard. And if the series are going to continue to romantically intersect — and why wouldn’t they? — maybe Jay Hayden’s sweet, stable Travis can be the guy who helps Grey’s Levi pick up the pieces when his relationship with Nico finishes collapsing? (As big a “Schmico” booster as I am, the writing is on the wall where their future is concerned, wouldn’t you agree?)

But I digress. I do that when I’m enthusiastic, and, to my pleasant surprise, I am enthusiastic about Station 19. So much so that, weird as it feels, I almost want to say thanks to ABC for strong-arming me into watching it again. You were right, I was wrong — it’s gotten not merely better than it was; sexy, zippy, funny and heartfelt as it is, it’s just plain good.

THE TVLINE BOTTOM LINE: Having gone from a flicker to a four-alarm fire between Seasons 1 and 3, Station 19 deserves a second look.