Fans have been waiting for five seasons to see the swaggering DEA agent pop up on Saul, and they’ll get their wish this Monday (AMC, 9/8c), as Dean Norris reprises his beloved Breaking Bad role, along with Steven Michael Quezada as Hank’s trusty partner Gomez. We can’t spill too many secrets about the exact circumstances that bring Hank into Jimmy McGill’s orbit, but TVLine did chat with Saul showrunner Peter Gould and secured some juicy scoop on Hank’s return:

They’ve been waiting for just the right time to bring Hank back…
“We didn’t know that Dean would ever be on Better Call Saul. Frankly, for our own pleasure, I think Vince [Gilligan] and I would’ve had Dean and Betsy [Brandt] and basically the entire cast of Breaking Bad on the show from Episode 1. But that wasn’t where the story was taking us. This season, we had a moment which really felt like the right moment for the DEA to be a part of the story, and of course, if you’re going to have the DEA in Albuquerque, there’s only two guys to go to.” 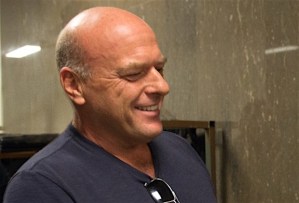 … but they worried that Norris wouldn’t say yes.
“I roped Vince into making the call with me. We were very nervous, because Dean could’ve very easily said, ‘Guys, I love Albuquerque, but I’ve got a lot of other things going on. I think we’ve kinda done that character.’ And it would’ve been very legitimate. So we had thought a lot about it, and about what there was more to say about Hank Schrader. We’re kind of in the middle of this very impassioned, arm-waving pitch… and Dean almost interrupted us. He said, ‘Guys, I love it, I’m there!'”

We’ll get to see a fresher Hank than we saw at the end of Breaking Bad.
“It’s so great to see Hank back before all the s—t went down with Walter White, before he started having that cloud over his head… the Hank Schrader we met in the pilot of Breaking Bad, who took so much pleasure in his life and in his work.”

It’s not just a pop-in cameo, either. (Hank and Gomez play prominent roles in Episodes 3 and 4.)
“[A cameo] is one thing that so far we’ve never been interested in doing, because I worry that it’s going to take you out of the show if you start seeing these familiar characters just pop up for a couple of lines. You’d really like them to be a part of the story… In Episode 4, there’s still more. You get to see Hank in action, and Gomez in action. They’re just great.”