A dozen more hopefuls were sent through to Hollywood on Sunday’s American Idol, including a familiar face whose story has taken some unfortunate turns since her time on the show. Read on for a breakdown of the 12 successful auditions from Week 3:

KIMMY GABRIELA, 17 | Idol‘s third week of auditions started off strong with this Florida teen, who says that music helps her connect with her Dominican and Venezuelan heritage. So, naturally, she performed… OneRepublic’s “Let’s Hurt Tonight”? Surprising song choice aside, the girl’s got pipes. At Katy Perry’s request, Gabriela performed a second song in Spanish, and the judges fell even more in love with her. They even blessed (or cursed?) her with a Top 10 prediction.

LAUREN MASCITTI, 27 | Backed by her fiancé, Grammy Award-winning songwriter Shawn Camp, this obvious shoe-in solidified her ticket to Hollywood with an unexpectedly mature, emotional sound. The judges also compared her to Laci Kaye Booth… which reminded me of the existence of Laci Kaye Booth. Can you believe that little country queen was on this show less than a year ago? I’ve officially lost all concept of time. Anyway, congratulations to Lauren!

DEWAYNE CROCKER JR., 23 | As Drag Race legend Tatianna once said, “We all make choices, but that was a choice.” I certainly wasn’t expecting this worship leader to deliver a sexed-up rendition of Bobby McFerrin’s “Don’t Worry Be Happy.” But I also didn’t hate it. It was smooth and pleasant, and it really showed off his range. The judges’ only concern was DeWayne’s personality — or lack thereof — with Lionel Richie offering this puzzling piece of advice: “You’ve got to think emotional, but also show business.” Help? 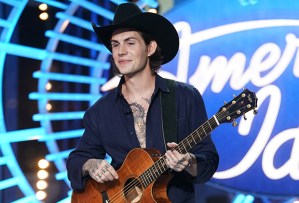 DILLON JAMES, 26 | Unless one of the actual Fates from Greek mythology decide to intervene, there’s no way this “country Post Malone” isn’t destined to become a fan favorite. All it took was a few breathy notes of Bob Dylan’s “Make You Feel My Love” and, boom, I was pregnant. And as the camera panned along the judges’ panel, a slack-jawed Luke Bryan and entranced Katy confirmed that everyone was having a wonderful time.

GEENA, 27 | This one was a close call, but she eventually won the judges over by beating her original song’s infectious chorus into their brains, then inviting them to sing along. If nothing else, she was fun.

SHANNON GIBBONS, 20 | A perfect mix of Darlene and Becky, Shannon blew the judges away with a breathtaking rendition of Etta James’ “I’d Rather Go Blind.” Maybe it was those sunflower bellbottoms, but I just wasn’t expecting that voice to come out of her. Katy gave the audition her official stamp of approval, saying, “This is why I keep coming back to this show, Shannon.” (Well, that and the ludicrous paycheck.)

GENAVIEVE LINKOWSKI, 20 | Well, this was a heartbreaking way to end the night. If Genavieve’s face looked familiar, it’s because she auditioned a few seasons ago, at which time she was joined by her supportive sister. That sister has since passed away, inspiring Genavieve to perform Michael Bolton’s “How I Am I Supposed to Live.” A powerful voice helped this song to soar, while its honest emotions kept it sufficiently grounded. (No, I’m not crying. You’re crying.)

Other notable contestants heading to Hollywood…

* The judges told 23-year-old Amelia that she was “a dream” after she enchanted them with a stunning performance of The Beatles’ “Yesterday.”

* Katy pulled the old “I don’t like it… I love it!” on 16-year-old Erin Kirby, whose bright pink hair matches really nicely with her last name.

* Jordan Jones, 26, got a little extra mileage out of his Golden Ticket, proposing to his girlfriend after serenading her in front of the judges.

* Andra Day’s “Rise Up” is beyond overused at this point, but 22-year-old Courtney Timmons’ beautiful take was undeniable. Her airy vocals took me to another planet.

* Lauren Spencer-Smith, a “very little girl with a huge dream,” brought a refreshingly natural sound with her performance of Pink’s “What About Us.” The 16-year-old left the judges speechless.

Your thoughts on Idol Week 3? Vote for your favorite auditions below, then drop a comment with your full review of the evening.