Seven new queens entered the workroom on Friday’s Drag Race premiere, which also blessed us with a television moment we never knew we needed: Nicki Minaj rapping about Carson Kressley.

I know some fans aren’t thrilled about it, but I actually prefer the premiere being presented into two parts. Among other things, it gave us more face time with each of the new queens — for better or worse.

Friday’s premiere introduced us to half of this season’s contestants: “Polynesian princess” Brita, a confident New York queen who all-too-accurately compared her drag to Maui becoming Moana; the glamorous and delicate (and hilarious?) Nicky Doll, Drag Race‘s first-ever French queen; Jackie Cox, the self-described “Persian Annette Funicello of drag”; Widow Von’Du, “the nastiest bitch from Kansas City”; Heidi N. Closet, who announced her entrance with a glass-shattering sound never before heard by man; Gigi Goode, who had everyone asking, “Who’s that bitch?” (And why is she dressed like a pirate?); and Crystal Methyd, who was basically like the world’s gayest party (and play) clown.

With only a half-sized gaggle of queens, this premiere wasn’t quite as dramatic as we’ve seen in seasons past, but the group’s initial meeting did provide a few tense moments. Like when Brita pointed out that Jackie has “smarts” but isn’t a look queen. Or when Jackie responded to Heidi’s entrance call by asking, “Is someone trying to come for my culture?” It was a lot, as always.

The first mini challenge of Season 12 tasked the queens with slaying the runway in separate spring and fall looks, giving Ru and the judges an immediate sense of their personalities and taste levels. Brita channeled Ursula for some “oil spill realness,” Nicky brought Gaultier-level looks and Fashion Week energy, Widow juxtaposed her “ratchet-ass queen” persona with a high-fashion sensibility, Jackie turned to ’60s icons like Barbara Eden for inspiration, Heidi gave us a full “psychedelic springtime” fantasy (complete with the season’s first wardrobe malfunction!), Gigi rocked a form-fitting BDSM jockey outfit (made by her mom!), and Crystal had jaws dropping with a full-blown Freddy Krueger gown.

With their first (winner-less?) mini challenge behind them, the queens proceeded to the main event: a lip-synced performance of a new rap single titled “I’m That Bitch.” And as if the girls needed another reason to be nervous about their individual verses, Ru revealed Nicki Minaj as this week’s guest judge. (Does that qualify as the first face crack of Season 12?)

As usual, the rehearsal process was kind of a mess. Despite getting along, the queens struggled to collaborate, and co-choreographer Widow was more than happy to let Heidi assume creative control. (Widow made multiple references to not wanting to go down with the ship. I felt like I was watching Titanic. Or listening to Dido.) Still, we must have only seen the dysfunctional moments, because nearly every queen managed to turn it out come showtime. 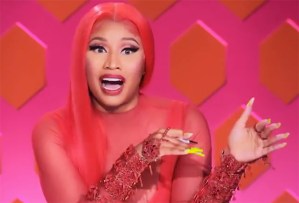 But first… Nicki Minaj! The queen of hip-hop made a hilarious entrance to the Drag Race runway, temporarily assuming hosting duties from Ru. (I can’t even tell you how hard I laughed at “She’s got that super bass, it’s Michelle Visage!”) She also seemed to have a lot of respect for the queens, and her critiques were refreshingly insightful. Basically, this one episode made up for the entire season she spent judging American Idol.

Nicki took a particular liking to certain contestants, going so far as to interrupt and challenge Michelle’s critique of Brita’s rap. But she was also brutally honest with others, like when she told Heidi, “I hate, hate, hate your hair and makeup today!” She also gave Nicky Doll an unnecessary ego boost by telling her, “Your face is shutting everyone else down.” (I guess it was nice, since Nicky did name herself after the rapper.)

Following the critiques, only Widow and Gigi were left standing… and rightfully confused. “I’m in the bottom?!” Widow remarked, while Gigi admitted, “I don’t even know what to think. Did I really do that bad?” Just the opposite, actually! Not only did Ru declare that no one was being eliminated this week, but she further switched things up by having Widow and Gigi — who were actually this week’s top two queens — lip sync for the win.

Not only did Widow put her entire being into her performance of “Starships,” but her intergalactic two-piece and pink wig were perfect for this Nicki jam. And don’t even get me started on that girl’s ability to bend. (Joints? Never heard of ’em!) Anyway, it came as a surprise to absolutely no one when Widow was announced as this season’s first lip sync winner.

Your thoughts on Friday’s elimination-free premiere? Click here for an early look at the queens joining the show next week, then vote for the contestant who made the best first impression on you. And while you’re down there, drop a comment with more of your thoughts.