We knew it was coming when, almost as soon as Schitt’s Creek’s Ted showed up on Alexis’ doorstep, he said that they needed to talk. But even our assumption that their relationship was about to reach an unhappy ending did little — OK, nothing — to lessen the blow of what was to come, a parting that the Pop comedy handled with admirable maturity and enough romance to make our hearts swell up one more time before breaking them. Read on, and we’ll go over not only the couple’s bittersweet goodbyes but all of the events in Tuesday’s “The Presidential Suite.” 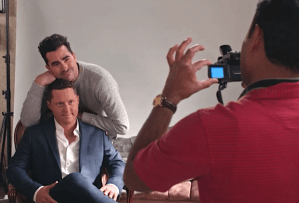 ‘I WANT US TO LOOK LIKE TWO VERY RICH PEOPLE THAT HAVE JUST WOKEN UP AFTER FAINTING ON A DUSTY OLD COUCH | In the first of the episode’s B plots, David was so determined to get the perfect engagement photo of himself and Patrick — although, what were the odds of that ever happening with Ray snapping the picture? — that he sent his pasty fiancé to the spa for a spray tan. When Patrick returned, he resembled nothing so much as an Oompa Loompa. Not to worry, “that’s what Photoshop is for,” David insisted — to tone that tint right back down. Later — a few showers later, specifically — Patrick looked enough like his button-faced self again for maid of honor Stevie to take his and David’s official, candid portrait.

In the other B plot, Johnny discouraged Roland and Jocelyn from taking a staycation in [insert episode title here] of the new motel. Since Moira assumed that her husband was just trying to discreetly secure the fancy room for their own use, she was chagrined to discover that he really, truly didn’t want any of them to make themselves at home there. Cut to: Moira feigning vexation at the way the hot and cold water faucets work at the Rosebud and marveling that anybody ever made it through the motel’s tiny, tiny doorways. When ultimately, Johnny granted her wish to spend a night in the lap of luxury — was there any doubt that he would? — they were interrupted by the Schitts. Since Roland and Jocelyn revealed that they’d been renting out their spare bedroom to help offset the costs of purchasing the new hotel, the Roses let them have the presidential suite, complete with its requisite, terrible JFK impersonations. 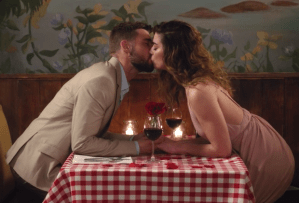 ‘I’D LIKE TO THINK THAT WE HELPED EACH OTHER GET HERE’ | In the episode’s main plot — and the one I’ve been trying this whole recap long to avoid having to think about — Ted surprised Alexis by returning for a visit to Schitt’s Creek. He’d actually have been there a day earlier, but between flight delays and a bout of milk poisoning… well, he was there now, and Alexis didn’t want to talk, she wanted to, ahem, “reunite” — immediately. Afterwards, Ted told her what he’d thought it had been important to say in person: He’d been offered a three-year contract to remain with the research team in the Galapagos. But he also didn’t want to give up what he and Alexis had. To her credit, she immediately expressed reluctance to ask him to give up his dream job. However, since things had all of a sudden gotten very heavy, she requested some time to think; she didn’t want to make any knee-jerk decisions, lest she wind up with the equivalent of the pixie cut that she’d had at prom.

Though the clock was ticking — Alexis and Ted only had that very day before he had to head back to the tortoises and flies — she spent it wisely, by stopping by the Café Tropical, where she flashed back to her and her ex-fiancé’s first meeting. Was she really going to leave everything behind to move to a random island to be with the love of her life? “I did that with Harry Styles in England,” she told Twyla. “It was like… too rainy.” Twy wasn’t worried about her friend; she knew that Alexis always made the right decision “eventually.” That night, Ted arrived at the café to find it empty, save for a decked-out Alexis (and Twyla, who never seems to get a night off!). He couldn’t move back to Schitt’s Creek, Alexis told him. He had to take his dream job. And “this might come as a shock to you… ” she added, “but I can’t move to the Galapagos.” Sweetly, Ted said that he wouldn’t have let her if she’d tried. He knew that the PR whiz was building something there, and she had to see it through. They were proud of each other, though. And they “can’t say that we didn’t try,” Ted noted. That, they had indeed. So they kissed, exchanged heartfelt “I love yous” and raised a glass “to us” — while we did our best not to sob so loudly that we couldn’t hear “Dedicated to the One I Love” playing in the background.

So, your reaction? Was this a natural progression for Alexis and Ted’s journey(s)? Or were you hoping that, when she series concluded, they’d get as happy an ending as David and Patrick? Comment away.