Onetime beat cop Sean Roman returns to the Windy City in this Wednesday’s crossover between Chicago Fire and Chicago P.D. (starting at 9/8c on NBC), but it won’t be a happy homecoming for the ex-police officer.

What brings Roman back is an intense personal crisis: His sister has gone missing, and her disappearance may be connected to a series of teen opioid overdoses. But instead of approaching his former colleagues at P.D. for help, Roman seeks out the Fire team, causing plenty of tension with his ex-girlfriend Burgess.

TVLine chatted with former series regular Brian Geraghty about his surprising return to his old stomping grounds, whether Roman still has feelings for Burgess and the “very, very challenging” nature of the crossover event.

TVLINE | How does it feel to be back after four seasons?
Has it been four seasons? I was trying to figure that out. It was just terrific. It was so fun. I loved being in Chicago — I stayed in my old neighborhood, the West Loop — and I couldn’t ask for a better way to come back and a better storyline, [which] was very, very challenging, in a way, but [it was] also fun to get back in there. 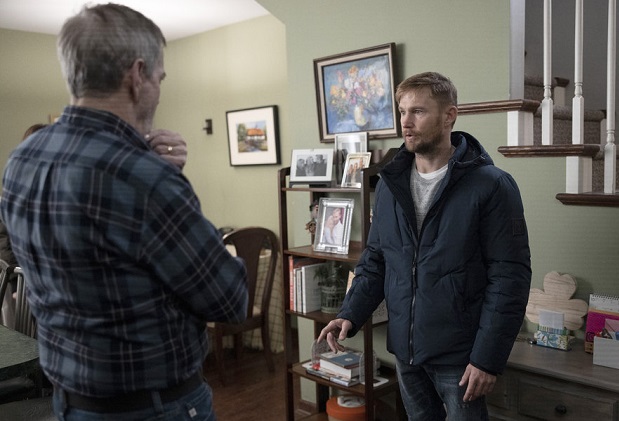 TVLINE | Without getting into spoiler territory too much, I will just say that they definitely did not go easy on you in this crossover.
No. It was some of the most challenging work I’ve ever had. Usually, you have a scene or two. But to sustain that, for weeks at a time, was interesting. It was certainly the most work, and the most difficult work, I had on the show, in any of the shows, in my whole experience on them.

TVLINE | Has Roman changed in the time that he’s been away?
I think they kept the fun aspects. But I certainly would like to think he’s a little more understanding and mature and not as emotional. [In his] reaction towards Kim, I hope that came across, that he understands her and why people do the things they do. He’s a little more forgiving in that way. As we get older, hopefully, we learn, and the things we sweat, as time goes by, we start to go, “Wait, it’s not really a big deal.” … You can’t really see it in the Fire episode as much, because I’m there doing one thing. I think the scenes between Burgess and me, hopefully, will show that. She’s obviously a different character, as well.

TVLINE | You have some very quietly meaningful scenes with Burgess. How do the two characters feel about seeing each other again?
Marina [Squerciati] and I got together several times and rehearsed and talked. We went over how we left each other, and we got a couple of the scripts. We did some homework, for sure. It was important to us, in that first scene, to bring the history that we had. You kind of break up with somebody, you thought you’re cool, they go off, your life moves on, they show up and they’re involved [in an investigation]. It’s kind of like I was going behind their back, and I think when we first [see] each other, the idea was there’s a lot of tension between us. She says, like, “Don’t lie to me! I rode in a car with you for two years,” and that’s kind of like the basis of our relationship.

Then we start to realize, like, “Oh, we’re kind of going through this very similar [thing].” We’re able to lean on each other a bit after. We wanted a bit of tension, and then we wanted, within the writing, to say, “Hey, OK, we know each other, we trust each other. As much as my pride says I don’t want to lean on you, f–k it. I’m going to do it,” because we have a history. It was so well-written in that regard. It was a great thing, stepping back into the character. I just knew how to do it. I knew how to talk like him. He does his one-liners occasionally, and I was like, “Perfect, I get it.” 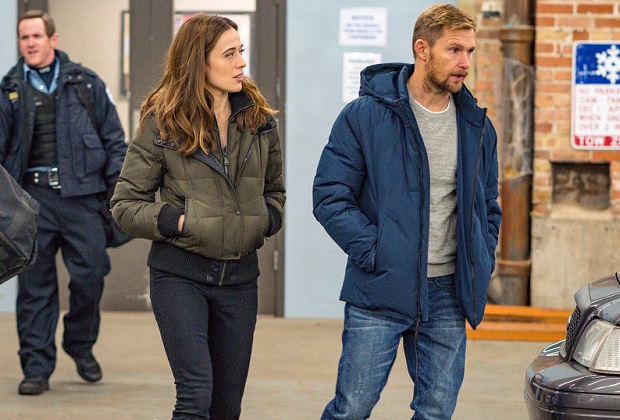 TVLINE | When Roman left the show, he wanted Burgess to come with him. Do you think he’s still holding a flame for her at this point?
The way I thought of it is he’s single, but you come back, and you go, “Oh, wow, you’ve moved on.” I think there’s still that chemistry between them, sure. I don’t think he’s holding a flame for her. If the writing was so that there was potential for us to get back together, I don’t think that would be totally ridiculous, in other words. I could see that in some manner.

TVLINE | Did this crossover make you want to play Roman some more? Or do you feel like you got some closure with him now?
I felt like I got some closure to him. The show’s doing great, and there’s no need to bring another character back. But certainly, if they had a storyline that was compelling… I had such a great relationship with the show in general, but also [executive producer] Dick [Wolf]. I certainly am open to it. But I don’t think anybody’s trying to just fill some void. The way they did this was certainly very high-stakes and compelling, and that’s the way I think would be most interesting to ever bring a character back. And I didn’t realize how much — I have a lot of fans from this show. It’s been great. A lot of people love these shows. It’s pretty incredible.

TVLINE | Did you ever think that you would be back? Were you surprised to get that call?
You know, I had a feeling… When I came on the show, I was never supposed to be there long-term. So it wasn’t anything weird when I left. The time was expired, and I like to move around a lot. I’m an actor. I like to play all different parts. So, no, I’m not surprised, because of the way they left it open. I got Law & Order, my first episode was in 1998. [I did] a different one [SVU] eight years later. Then there was a couple opportunities, and then this came along. It was great timing. So Dick has been just a great advocate to me. We have a great relationship. So anytime Uncle Dick calls, I drop what I’m doing.