Jimmy McGill has conjured up a whole new persona as Better Call Saul kicks off its penultimate season — but did he make the old Jimmy disappear?

Sunday’s Season 5 premiere begins, as usual, by checking in with “Gene” at that Cinnabon in Omaha. Still recovering from his panic attack, a rattled Gene digs through his closet and finds his trusty Band-Aid box, which is full of loose diamonds. He also puts a fresh license plate on his car and calls a co-worker to ask if anyone’s come by looking for him. He’s monitoring the police scanner for anything unusual, too, but he eventually goes back to work, where he’s stopped by a guy who recognizes him as Saul. The guy — a cab driver named Jeff — pushes “Gene” into admitting he’s Saul, then tells him (ominously) he’s “never more than five minutes away.” That’s enough to get Gene to call Ed the cleaner and request another service call. Ed tells him this one will cost him double… but Gene suddenly changes his mind: “I’m gonna fix it myself.” 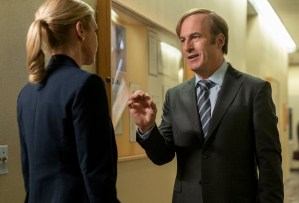 Back in present-day Albuquerque, Kim looks on as Jimmy officially changes his name to Saul Goodman at the state bar. He’s reinvigorated — “I thought I was wasting a year of my life. It wasn’t a waste. It was for this!” — but she’s still not convinced. She got him a legal briefcase as a reinstatement gift; it’s monogrammed “JMM,” but he assures her he can still use it. (“Justice Matters Most”!) He tells her his plan to convert his cell phone clients into legal clients by offering deep discounts: “Non-violent felonies, 50 percent off.” Sensing her hesitation, he explains: “I can’t go back to being Jimmy McGill,” aka Chuck’s loser brother. This is a fresh start for him, and he’s excited. I wouldn’t call Kim “excited” just yet, though.

Jimmy launches Saul Goodman Inc. by donning a flashy red suit and setting up a tent in an empty parking lot, giving away free cell phones in order to lure in an eager client base. He chats up each customer about their legal issues before handing over the phone — and even adds himself as #1 on the speed dial. He points to Huell, who’s working the door, as one of his success stories, and now Huell’s calling him “the Magic Man.” When he runs out of phones, the crowd starts to thin, but he pulls them back in by offering that 50 percent discount and hands out a bunch of business cards. Saul Goodman is officially open for business.

“Saul” gets right to work, accosting that bald deputy D.A. Oakley with a fake TV camera crew and accusing him of railroading his client, threatening to countersue for malicious prosecution. (Jimmy’s old film school pals are behind the camera, of course.) The stunt wins him a few new clients, but meanwhile, Kim is busy trying to talk a pro bono client named Bobby into accepting a plea deal for five months. He still wants to go to trial, though, so Jimmy offers to pose as someone from the D.A.’s office and threaten to pull the deal so he’ll take it. Kim is insulted and refuses to scam her clients, so Jimmy backs off… but when she returns to Bobby, she does tell them Jimmy was with the D.A.: “Looks like they want to make an example of you.” A scared Bobby agrees to the five-month deal, and Kim promises to look into it — before ducking into a stairwell to catch her breath. 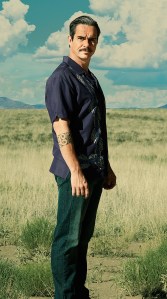 LALO RIDES HIGH | It’s looking like Lalo Salamanca will be Season 5’s Big Bad, and a formidable one at that: Hector’s nephew quizzes Nacho and Krazy-8 about what happened to Werner Ziegler and this bald gringo named “Michael,” before they investigate a report that their dealers’ product is being “stepped on.” They visit a pick-up spot where buyers collect their baggies of meth from a drain pipe, and Lalo marches straight in and determines after a quick sampling, “This s—t ain’t ours.” He confronts Gus Fring and Juan Bolsa, and Gus blames Werner Ziegler for stealing two kilos and replacing them with inferior product. (Yeah, right.) Lalo also inquires about Gus’ construction project, and Gus claims they’re just building a massive chicken chiller. Mike is even there in a hard hat to sell the lie, and Juan Bolsa urges Lalo to find a way to work with Gus: “As long as he brings in the dollars, Eladio is happy.”

Speaking of Mike, he sends the rest of the German construction crew home with full pay, even though the job’s only half done, requesting their “cooperation” in return. One guy assures Mike he did what he had to do, because Werner was “soft,” and Mike socks him hard in the jaw; another tells Mike that Werner “was worth fifty of you,” and Mike lets him go without a word. (Guess he agrees.) Later, Gus tells Mike he’s concerned about Lalo, and construction on the superlab will remain on hold until Lalo is “dealt with.” He offers to pay Mike to wait, and adds that Werner’s wife has been compensated for his death — which makes Mike bristle. He rejects Gus’ money and walks out on him. Hmmm… feels like the ghost of Werner Ziegler might loom over this whole season, doesn’t it?

Alright, Better Call Saul fans, it’s your turn: Grade tonight’s premiere in our poll, and then hit the comments to share your thoughts.