American Idol auditions continued on Sunday, serving up enough raw talent and dramatic backstories to leave you feeling dizzy. And if that didn’t do the trick, there was also a gas leak!

It was actually a fairly dramatic to-do, even if no one was ever in any real danger. (Confession: When Katy Perry fell to the ground in a dramatic fashion, part of me thought she wasn’t joking. For like a second.)

I’d also like to give a shout-out to that one girl who was like, “Wait, should I still audition?” when they told her about the gas leak. That young woman showed up to sing, and if that meant passing out and/or exploding in a fiery blaze, she was prepared to make the sacrifice. Send her to Hollywood, I say!

Anyway, I actually am feeling a bit lightheaded, so let’s cut straight to the Hollywood-bound singers we got to know this week… 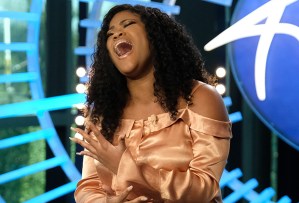 CYNIAH ELISE, 17 | Backed by a veritable army of prayer warriors, this viral sensation climbed every mountain, swam every ocean and crushed every note of Calum Scott’s “You Are the Reason.” The judges couldn’t help but get caught up in all the excitement, with Sister Perry proclaiming, “Finally, the Lord has blessed us!” Not a bad way to open the night.

KAY GENYSE, 19 | The religious undertones continued with Perry literally quoting Bible verses with the next contestant, who auditioned for Idol at the behest of a cookie fortune. And, of course, she keeps that fortune in her hair. Her pitchy performance of Duffy’s “Mercy” did little for the judges, but her undeniable charisma suggested there might be enough potential for them to work with. Unable to confidently break the panel’s tie vote, Perry dragged Genyse into the streets and let a jury of strangers decide her fate. Genyse’s second performance wasn’t much better than her first, but the whole thing was so awkward, I feel like she earned her ticket to Hollywood.

KYLE TANGUAY, 21 | Not many contestants come flanked by an entire NFL cheer squad, but not many contestants are the Philadelphia Eagles’ only male cheerleader. Tanguay’s take on Shawn Mendes’ “Mercy” wasn’t perfect, but just like Tanguay’s warm disposition, it felt nice and natural. I initially questioned Perry’s decision to have him sing the song again in a higher key, but I’ll be darned if she didn’t bring out an even better performance. If Tanguay plays his cards right, he could prove to be a real dark horse in this competition. 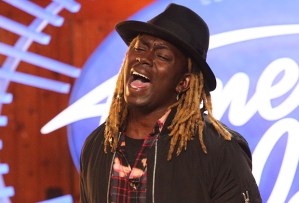 JOVIN WEBB, 28 | Thanks to an early posting on YouTube, this performance of the Allman Brothers Band’s “Whipping Post” — easily the season’s most authentic audition yet — was already a crowdpleaser long before it aired on TV tonight. “You officially brought the barbecue sauce to American Idol,” Lionel Richie told Webb after the judges’ treated him to a well-deserved standing ovation. Luke Bryant echoed that sentiment, calling Webb’s voice “something only Louisiana could create.” As for Perry, I’m pretty sure she’s still in a trance. Has anyone checked on her?

MARGIE MAYS, 26 | She’s baa-aack! Following her elimination in Hawaii last season, this Energizer Bunny of a human returned for another shot at stardom — and she didn’t come alone. With her boyfriend backing her up, Mays delivered a precise-yet-emotionless performance of Adele’s “I Found a Boy.” The judges apprehensively offered her passage to Hollywood, but they made it clear that she needs to fine-tune her presentation. As Richie instructed her, “Get out of your head and into your voice.” Deep stuff.

JONNY WEST, 23 | Mays’ main squeeze, meanwhile, checked off all the judges’ boxes — and then some. His original ditty about the joys of keeping a lady warm at night was loaded with fun vocal trickery, and that was before he broke things down with a rap break. (You guys, that rap break!) It went on a little too long, but it wasn’t terrible. It kind of worked for me, and believe me, I’m just as apprehensive about white rappers as the next recapper. The judges rightly compared him to last season’s runner-up Alejandro Aranda, and Katy even offered him a friendly warning: “I don’t want this for you and your relationship, but you may go father than Margie.” 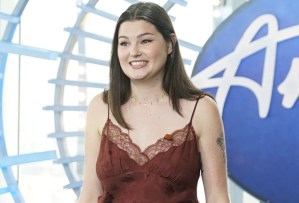 SARAH ISEN, 20 | I loved everything about this audition, from the adorable footage of Isen’s two moms to the “wait, what?!” reveal of her backstory. After getting in touch with her sperm-donor father — who donated to a bank that specifically catered to LGBT couples — Isen learned that she has 26 half-siblings, 10 of whom came to support her at this audition. I was already fully invested in Isen before I heard her sing, so imagine my delight when she blessed us with that deep, stunning and emotional rendition of Beyonce’s “If I Were A Boy.”

JULIA GARGANO, 21 | Inspired by the success stories of less “conventional” contestants like Aranda and Catie Turner, this singer-songwriter entranced the judges with a studio-ready — or at least Grey’s Anatomy-ready — original song called “Growing Pains.” Perry loved it so much, she stood up and gave her a hug.

HANNAH PRESTRIDGE, 24 | When it comes to captivating backstories, Idol saved Sunday’s most compelling for last. The final performance of the night came from Prestridge, a mother of two and a recovering addict. With her husband by her side, she treated us to a heartbreaking original ballad called “Day By Day,” which chronicles the darker days of her struggle. Perry commended the natural pain in Prestridge’s incredible voice. I’m excited to see where her story goes from here.