As CBS’ Criminal Minds came to an end and the BAU enjoyed one more party in Rossi’s back yard, Emily danced with beau Andrew Mendoza… Dave had wife Krystal at his side… and Matt and Kristy enjoyed some time away from the(ir many) kids.

Spencer Reid, however, conspicuously attended said soiree stag, despite the fact that just a few episodes ago (or a month-plus in on-screen time), his and Maxine’s nascent romance seemed to survive the brutal meddling of Cat Adams. (In fact, one might say Maxine, played by Rachael Leigh Cook, even got a charge out of helping bring down the baddie!)

Where was Maxine, leaving Reid to adorkably dance by himself?

We presented this burning Q to series vet Matthew Gray Gubler, who plays Reid, and he seemed as disappointed as anyone. “I know, dude. I have no idea,” he shrugged. “I’d like to know as well!” 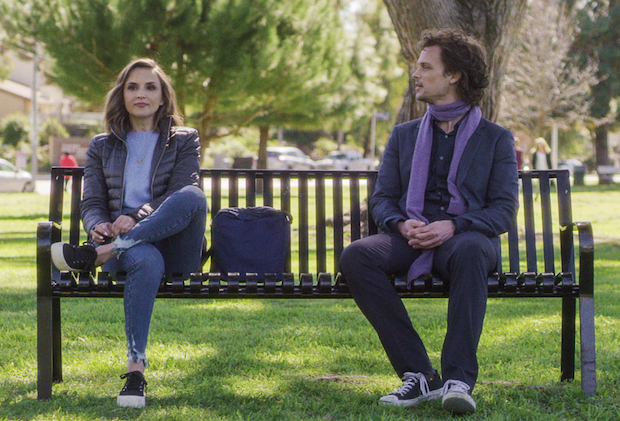 When we suggested that, once the dust of the Cat Adams dust-up settled, Maxine came to realize that dating an FBI profiler came with too much draaama, MGG nixed that notion. “No, I think she’s still around,” he maintained. “But I don’t know. I don’t know, and I hope that they resolve that someday. Because I’d like to know.”

Gubler went on to share that during “a mad dash to finish the finale, there were a lot of changes happening at the last minute.” He then theorized that there was a desire to limit the invite list to longer-running guest stars. “Maybe that was part of the impetus behind it? But yeah, it’s a great question.”

Alas, a well-placed source tells TVLine that Reid and Max’s series-ending relationship status was “intentionally left open to viewer interpretation” — meaning it’s a question that for now, at least, will go unanswered. Which is a bit better than the prospect for finding out what Penelope wrote on the slip of paper she folded and tucked between her desks, before bidding the BAU adieu.

“We’re never going to say [what she wrote],” showrunner Erica Messer, who co-wrote the series finale with cast member Kirsten Vangsness, told TV Insider. “We want that to be whatever you want it to be. I had a different idea for what it would be than what Kirsten had and what other people think it is, and I think that’s the point of it…. Kirsten and I both agree she was leaving a note for the next person to find one day.”