It is time to bid the BAU adieu — which at least one character will very literally do, as CBS’ Criminal Minds uncorks its series finale this Wednesday night (in back-to-back episodes starting at 9/8c). But first, the team will need to hunt down and hopefully harpoon their Moby Dick, the Joker to Rossi’s Batman — Everett Lynch aka the Chameleon. And in the course of doing so, Reid, for one, will quite vividly revisit the crime drama’s 15-season past.

Matthew Gray Gubler, one of the last original cast members still standing, spoke with TVLine about the double-episode series finale, which among other things revisits Reid’s “extra-ridiculous” hair days. (SEMI-SPOILER WARNING: This Q&A briefly alludes to previously announced returning guest stars, as well as mentions a party scene that has been widely promoted on air and in photos.)

TVLINE | First off, to tee up finale night’s first episode — things have been pretty quiet on the Chameleon front?
Yes, but the Chameleon is back and he’s more chameleon-y than ever. He’s worse than ever, he’s got a vendetta with Rossi, and he’s taking people’s faces left and right. Rossi, though, has a new theory to pursue, and… well, I don’t want to give too much away.

TVLINE | Last week, we saw Prentiss talking about maybe getting a job promotion, and JJ’s thinking about maybe going to New Orleans…. Is the question not so much who’s going to be leaving the BAU at the end of the day but how many?
That is the question they’re hoping to pique in people’s minds. The last two episodes, as all 324 episodes, have been written really beautifully and thoughtfully, and they’re teeing up, I think, something really special. It’s a really beautiful ending, but they’re setting up a lot of different avenues of exploration for these heroes that we’ve come to love and have in our homes for so many years. It’s kind if interesting to see how it all will eventually shake out. 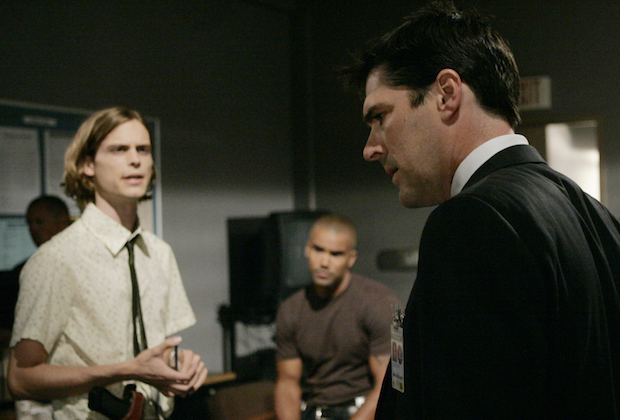 TVLINE | The actual finale episode opens with an old clip from Season 1, with Hotch, Gideon, Derek and Elle Greenaway. And then you come walking through with your messenger bag. What do you think these days when you watch one of those old scenes of yours?
It’s so surreal, I can’t quite explain it. With the show coming to an end now, I’m sort of like being inundated by friends sending me funny pictures of “the old days.” I’m the type of person who, for lack of a better term, likes making stuff so much that I never really take time to celebrate the end product, if that makes any sense. Now that the show is over, I can watch it and enjoy it, and kind of see it from a new perspective. It’s so funny to see those old episodes because they really honestly feel like we shot them last week, but then I look at how different we are, and how extra-ridiculous my hair might be.

TVLINE | I was going to say, your hair was a rather different animal.
[Laughs] Oh my gosh. Well, the other funny thing about the show ending is it’s like saying goodbye to the most ridiculous hairstyles that have ever existed on network television. That’s what I’m having the most trouble letting go, is my horrible haircuts. I’ll have to get a real haircut now!

TVLINE | CBS put out a press release detailing returning guest stars for the finale — Jayne Atkinson, Beth Riesgraf, C. Thomas Howell as Foyet — as Reid is visited by “ghosts.” What was it like working with all of these past cast members in one fell swoop?
It was so great. They all feel like they’re there presently in every episode because they had such a big impact on the series. When I’m playing Reid, Jayne’s always in the back of my head, and Beth Riesgraf is always in the back of my head, and Foyet even, so it’s just kind of neat to see them manifested in reality while filming. It’s a really cool finale, a really special one that does a nice little job of closing out this, for lack of a better term, insanely long run, this special thing we’ve been so blessed to be a part of.

TVLINE | How emotional did it get for all of you actually filming the final scenes?
I got to be in the very last shot of the entire series, which was a nice bookend because when we shot the pilot, I remember, I was in the very first shot that we ever did of the entire series. And in both instances, I got to operate the camera. They let me press the button and hit Record and everything. I was coming from film school when I was cast on the pilot, so I was trying to impress the crew and let them know that I know how to work a film camera.

If the show had only gone for six years, it probably would’ve been emotional, but because it’s been such a beautiful presence in our life for 15 years, it wasn’t sad. It was kind of beautiful. 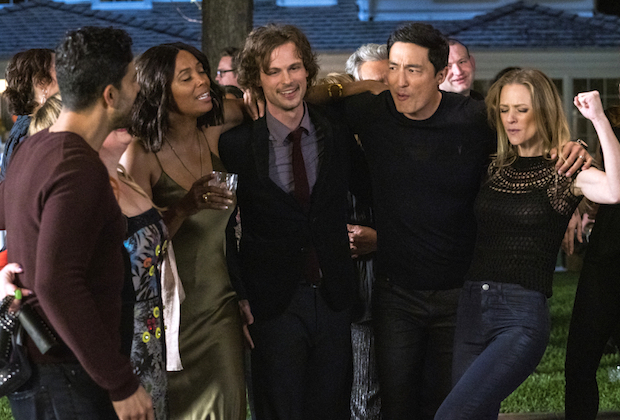 TVLINE | That is very much the vibe during the final party in Rossi’s backyard. You feel this very tangible lightness going on, a mood of celebration.
Yeah, I don’t know what to liken it to, but it was just a great experience, and everybody’s still friends. There’s a big finale party that we’re going to with all of the crew on Saturday, and I still talk to everybody — we’re just not holding guns anymore when we talk. [Laughs] Well, I am, but they aren’t.

TVLINE | Speaking of party scenes, here’s a question I had when watching Reid dance: Do actors simply dance as well as they themselves can dance, or does anybody need to modulate their style to be “true to the character”?
That’s a wonderful question. My entire run of the show, I’ve been modulating everything to be Reid. For instance, I’ve always worn my gun in a very specific position that people love to make fun of and yell at me for, especially when people stop me on the street — “You don’t know how to carry a gun!” But I’m playing a character and I’ve purposely done little things that make Reid seem a bit more out of touch with the FBI. And that includes my dance moves. In real life, I’m not the world’s best dancer, but Reid is an even worse dancer than I am, so yes, there is some heavy modulation going on there. 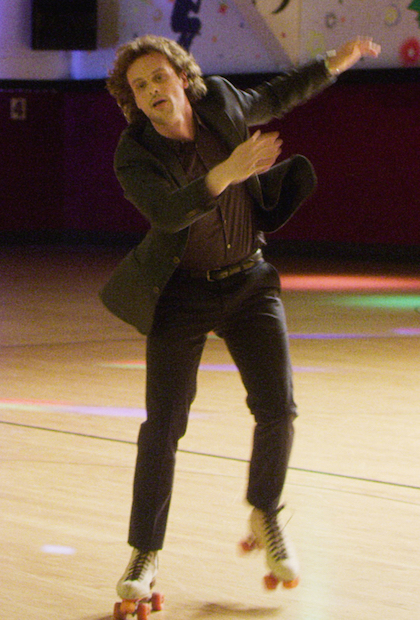 TVLINE | And you’re both awkward on roller skates? Or was that also “acting”?
I’m an incredible roller skater, and I remember everybody was very frightened when they wrote that [“Date Night”] scene. They were like, “Gub, you can’t do the stunt,” and I’m like, “I’m a really good!” I grew up skateboarding, and not to brag, but I’m very good on wheels. I love falling, so it was fun to pretend like I couldn’t quite move on them.

TVLINE | You were a very steady presence during this farewell run, whereas in recent seasons you’ve taken episodes off for outside projects.
There were some seasons when I was reduced because I was working on a lot of independent projects and writing a book. When my character went to prison, I was in a reduced capacity a bit to make way for some other movies that I was doing, but I feel a responsibility to the fans and to the art of storytelling where if you’re lucky enough to get to entertain people, that’s exactly what you should do. This was basically the first audition I went on, aside from The Life Aquatic, the thing I was in before, so it is not just my blessing but my duty and my great good fortune to get to be a part of it.

I know that everything has its time and I’m in no way sad that the show is closing, because I feel like we’ve done it beautifully, and I feel like there are roots there for it to re-hatch later.  I kind of liken it to if you go to a concert, at a certain point the band has to leave the stage in order to have an encore. It’s just the natural progression.

TVLINE | What are you going to miss most about this crazy, dark, twisted show where you got to create such a memorable, specific character, and you got to direct…?
Most of all, I’m going to miss the breakfast burritos. We had the best chef on planet Earth, and I’ll miss him. [Laughs] No, I joke. I’ll miss the people, of course. I’ll miss the crew, and the cast, and everybody, but luckily I talk to them — probably more now that the show is over. I’ll also miss being on the jet. The jet was always this magical place, a a small set where we all just kind of felt like we were at a sleepover and telling stories.  Every day felt like a family reunion holiday, and I’m so happy I got to do that for so many years.