This week on The Flash, Iris learned a bit more about the strange world inside of which she is trapped, while Ralph learned to be careful about what he wished for, in finding Sue Dearbon.

Pounding on the other side of the loft mirror, struggling to get Barry’s attention, Iris was startled to be found by Eva McCulloch — and vice versa! Eva assured Iris that she was not dead, but trapped, as she herself has been for six long years, ever since the particle accelerator explosion blasted her into her office mirror. Eva, a scientist, explains that she and Iris are inside a “fractal dimension” that humans can’t see, a mirror world where everything is backwards (except hair parts, I guess). Eva is overjoyed to finally have someone to talk to, but Iris is more interested in freeing them from this realm. Eva is skeptical, having tried 1,322 times already to escape, but Iris offers an idea co-opted from the Sam Scudder days, to transform the mirror’s state via liquid nitrogen. Eva has some handy, but alas all that does is shatter the mirror into hundreds of shards.

Eva launches into a rant, about how foolish she was to think this time would be different — and how glad she is to not have that cockadoodie mirror to look into any more. But as she gets heated, one of the shards floats into her palm. Recognizing that Eva has a power of some sort, Iris nudges her new gal pal to command the shards to reassemble — and they do, allowing Iris to peek in on Barry, who seems to sense he is… being watched? “I’m still with you,” Iris assures her husband. 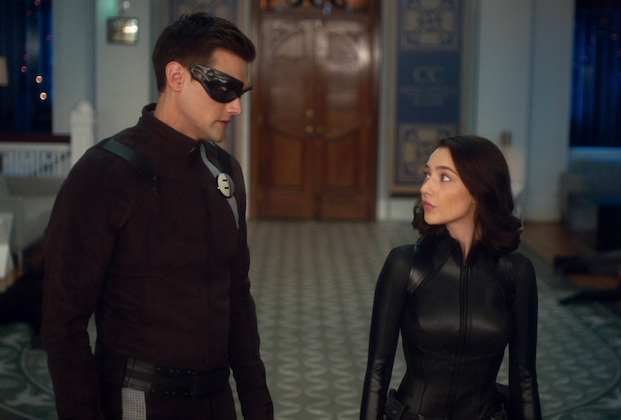 SUE-PRISE, SUE-PRISE!
Some 274 days since he was first hired to find Sue Dearbon, Ralph gets pinged when the missing lass lays down a deposit on an apartment in Central City. Arriving at her door, Ralph is nearly killed when the flat explodes — ‘cept Sue saves him. Back at Ralph’s office, Sue claims that she fell in love with John Loring, whom she discovered was a ruthless arms dealer, and now he wants her dead, because she knows things. Sue is on the hunt for damning evidence against her ex, in the form of a ledger. Ralph and Sue case the building where Loring’s office is, then sneak in to find only a safe deposit box key. Approached by guards, Ralph reveals his meta power to streeeeetch them to safety down below. Afterward, Sue suggests that they act now with the key, by breaking into the bank. Ralph expresses his reservations, yet is coaxed into helping, as long as Sue promises to deliver the ledger to his pals at the CCPD after. Alas, after sneaking into the vault (posing as Joe and a bank guard) and opening the box, Sue pulls out not a ledger but a big ol’ diamond, before KO-ing Ralph. In short, everything she told him was a lie, and if he keeps her secret from her parents — that she is a thief — she will keep mum about Elongated Man. After locking Ralph inside the vault, Sue finds Loring and his armed goons waiting for her in the bank lobby. Before they can riddle her with bullets, Ralph snakes in through the sprinkler system pipes and stretches his fist into a giant protective shield. Once the bullets stop flying, Ralph opens his hand to reveal 1) Sue has changed into one wowzers of an Emma Peel-like catsuit, and 2) the goons are all knocked out — by Ultraviolet! Sue and UV trade words and then exchange blows, but Sue manages to slip away with the gem UV seeks. In the “bonus” scene, we see Sue put the gem under a microscope and regard the Black Hole symbol etched on it, with photos/news clippings about John Carver nearby. “Game on…,” she says.

GIMME THE GUN
Barry is still (and quite conspicuously) sore from the run-in with Amunet and Goldface (is his strength/healing compromised by not having his true “lightning rod” around?), and Iris is busy investigating Black Hole. To that end, Iris asks to see the Mirror Gun stolen from McCulloch and now kept in the Starchives. Barry, however, balks, saying that if Black Hole got their hands on so powerful a weapon, who knows what would happen. Iris instead sneaks into the Starchives and has just found the gun when she bumps into Nash. She lies about misplacing Nora’s journal, while Nash (with the “specter” or whatever of Harrison Wells looking on/taunting him) lies about doing inventory. When Iris departs, gun-less, we see that Nash was retrieving Harrison Wells’ diary. At home later, Barry delivers the gun to Iris, saying that after learning from Joe that Carver and Black Hole have been having lotsa dirty doings covered up for years,  it’s important that she have every resource possible to take them down faster. “I don’t trust the world, but I do trust you — with everything,” he says.

What did you think of the episode “A Girl Named Sue”?