Survivor‘s Winners at War season is off and running — and though the all-champs spectacular couldn’t possibly have been more anticipated, there’s one element that seems to have harshed fans’ mellow: the return of the highly contended Edge of Extinction twist.

Introduced to the franchise in Season 38, the Edge of Extinction is a bleak, remote beach with even fewer amenities than the main island, where expelled contestants live to await a chance to re-enter the game. The twist was the subject of much controversy when that cycle’s Chris Underwood, voted out on Day 8, re-joined the game on Day 35 and won the entire season. Technically, Underwood only “outwitted, outplayed and outlasted” for 13 of the 39 days, which for some adds a big ol’ asterisk next to his victory.

The announcement of the Edge as part of Season 40’s Winners at War was a surprising one. Prior to its Feb. 12 premiere (read our recap here), the hashtag #EndEdgeOfExtinction saw longtime fans debating the effects of the twist, especially for an all-returnees season. From a production standpoint, the pros are clear: With such a dynamic group of competitors returning to the island (including Parvati Shallow, Sandra Diaz-Twine and Boston Rob Mariano), the Edge ensures the show doesn’t lose the biggest personalities pre-merge, a factor that plagued Game Changers, the show’s previous all-star season. Giving the franchise’s most capable and die-hard competitors (read: the biggest targets) this second chance keeps everyone hustling ’til the very end, while guaranteeing fan favorites remain on screen regardless of when their torches are snuffed. 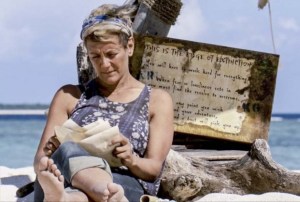 But then there are the counterpoints.

Having that safety net strips away all of the drama and tension from the show’s defining moment: the vote-off. From a purist’s perspective, when “the tribe has spoken,” that should be it. Thanks for playing, bye-bye now. Keeping rejected players alive in the game doesn’t raise the stakes any higher; it feels like treading water. Additionally, all of the Edge participants bond in an environment outside of the main game. The returning player ultimately spends this time making friends with the jury, which feels too advantageous and unfair to those still in the game. (For the record, I wasn’t a fan of Redemption Island or the Outcasts twist on Pearl Islands either.) Re-entering players works on many other competition series, but on Survivor, it disrupts the sanctity of the game.

Host and executive producer Jeff Probst hears your cries. “When people get so invested that they don’t like [the Edge], that tells me, ‘OK, we’re in this together, you don’t like it, I get it’… we’re not going to do Edge for a while,” he said in an interview with Rob Has a Podcast host and former Survivor contestant Rob Cesternino. But Probst also added, “I’m not saying we won’t do it again… I like the back and forth [between fans and producers], but I wish people understood I’m truly coming from love.”

Having purged these frustrations, the Edge and Season 40 are walking hand in hand, so let’s focus on the positives: We finally have a freaking winners season! There are old school players we haven’t seen in years, like Ethan Zohn and Yul Kwon! We have some of the best social strategists the game has ever seen (Kim Spradlin-Wolfe! Sophie Clarke!) back and ready for bloody battle. And then there are the fire tokens, which allow Edge players to work for advantages they can sell to players for currency in the game. Will castoffs be able to buy their way back for a certain amount of tokens? Will selling these advantages help Edge players build new alliances from afar? If the Edge must exist, the fire token element at least adds a shiny new layer.

The days of “old-school Survivor” are long gone. The Edge is here (for now) and the show’s recent “advantage-palooza” trend isn’t going anywhere either. There are plenty of reasons why Survivor continues to outwit, outplay and outlast its reality TV competition, and twists like the Edge — love ’em or leave ’em — at least prove the show is willing to take chances in order to stay fresh. Game on.

Do you wish castaways would hit the road after the vote-off? Weigh in via the poll below, then tell us your thoughts in the comments!