Ja’net DuBois, best known for her role as Good Times‘ Willona Woods, died on Tuesday at the age of 74, TMZ reports. A cause of death has not been disclosed. 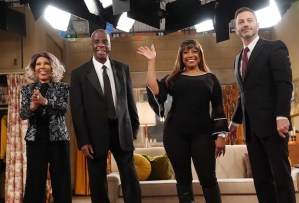 DuBois rose to fame as Florida and James Evans’ next-door neighbor on the aforementioned Norman Lear sitcom, which ran from 1974-1979. She also co-wrote and sang the iconic Jeffersons theme song “Movin’ On Up.”

In addition to Good Times, DuBois played Ma Bell in Keenen Ivory Wayans’ 1989 blaxploitation film parody I’m Gonna Git You Sucka. She also recurred in the ’90s sitcom The Wayans Bros. as Grandma Ellington, and gave voice to Mrs. Avery on the animated series The PJs — a role that earned her two Primetime Emmys for Outstanding Voice-Over Performance.