This week on NBC’s Manifest, one of the most frightful callings yet came to fruition, putting the actual lives of numerous 828ers in peril. Plus, we finally met the elusive Alex!

Picking up some time after the gang shared in that big-budget calling — in which Ben, Mick and Saanvi found themselves inside the charred, melted remains of a seemingly crashed Flight 828, with ash falling all around them — Ben, as he does, puzzled over what it all meant. That is, when he and Grace weren’t overprotectively raining on Cal’s plans to hang with a friend at Coney Island, or reminding Olive that she is grounded after confabbing with Adrian’s “cult.”

In fact, Ben has had it up to here with Adrian, so he headed to the church and threatened the fellow 828er with criminal charges. While the gents had it out, always-creepy Isaiah lingered nearby, listening in. Creepily.

Olive and TJ, after learning that Al-Zuras (he of the tarot card whatever) kept a journal, which the library had on hold for the kids, headed out to a club. Ben, after extending an olive branch (no pun intended) to Adrian, also headed to the same club, to talk things over with the church leader. And guess what, Michaela wound up there, too, with the promise of meeting up with Isaiah to get some intel. But one by one, Ben and Michaela came to realize that not only were they led to the club under false pretenses, but many of the other people there were fellow 828ers!

Just as Mick took notice of the champagne brand being served (it matched the one seen in the latest calling), 828ers began toppling over, drugged (or worse) by the bubbly. Isaiah, it turned out, had led everyone there (even pinching Adrian’s cell phone) with the intent to poison them, lock them in, and set the place on fire. As the place started filling with smoke and flames, Ben and Michaela did their best to bust down back doors and get people to safety. Zeke arrived to lift a red-hot beam off flight attendant Bethany — not getting burns on his hands, but frostbite?! —  while Olive twisted her ankle at one point, forcing Ben to leave TJ behind with nutjob Isaiah. But just as Ben dropped Olive outside and readied to double back in, the club went kaboom! TJ is (at least seemingly) a goner. 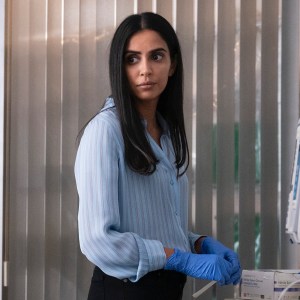 Saanvi, meanwhile, was spared all of this fiery drama, in part because she was busy working on the serum to remove the DNA anomaly. In that seemingly futile endeavor, she was nudged by her father to consult the immunologist who in the past helped her with her cancer work — which Saanvi begrudgingly did, because said immunologist is the Alex, as in her no-show traveling companion to Jamaica. As the ladies reunited, Alex tried to apologize for 1) flaking out en route to the airport way back when, and B) not touching base with Saanvi after she miraculously returned. (Turns out married Alex had worried about imploding her family in the name of a “fling,” ouch.) Saanvi wanted to hear none of it, and regardless, Alex still has her magic touch, as Saanvi’s next run at the serum was a success! And that was why she didn’t share in the gang’s very latest calling, inside the club — and which Adrian this time admitted to sharing.

In the wake of the club fire, Mick and Zeke professed their love for one another, despite the fact that she called him earlier on his secret pill stash… Saanvi found and thanked Alex with a very warm, teary hug… Mick realized that Jared had surreptitiously accessed her case file about the X-ers… and Oliver told Ben about Al-Zuras’ journal, which the library had delivered to his university office. There, Ben popped open the dusty tome and near-immediately spotted a drawing of a man carrying a young woman away from a fire — exactly as he had done with Olive! And as this moment registers with Ben, the journal starts emitting a bright glow from its pages…. Because.

What did you think about the episode “Emergency Exit”?