After hitting the pause button on Zoey’s Extraordinary Playlist for more than a month, NBC welcomed back its quirky musical dramedy on Sunday night. But if the hiatus left you a bit fuzzy on the details of Zoey’s’ series premiere, allow Zoey herself to catch you up on what happened after she started hearing people’s innermost thoughts in song:

“Because of whatever this new ability is, I discovered that all the programmers at work hate me,” she tells neighbor Mo during Sunday’s episode. “On the other hand, I was able to communicate with my dad again, and bond with my office crush. On the other hand, my office crush has a fiancée, and my best friend is in love with me. Or at least thinks he’s in love with me.”

So, Zoey’s kinda going through something right now — and she wants to find some way to control her new power ASAP, seeing as these impromptu musical numbers tend to happen at the worst times. For example, just as Zoey is leading her first meeting as SPRQ Point’s new manager of engineering, her colleague and best friend Max confirms that he’s definitely in love with her via a cover of the Jonas Brothers’ “Sucker.” There’s even some seductive dance moves! But by the time the song concludes and Zoey comes back to reality, she’s been sufficiently distracted, and the meeting comes to an awkward, abrupt end.

Making matters worse? Zoey has a pretty poor reaction to the news that Max is into her — which, of course, Max doesn’t know that Zoey knows. So when Max invites Zoey to dinner at Hand-Picked, a farm-to-table restaurant that they’ve wanted to try for months, Zoey gets nervous that he’ll perceive it as an actual date, and she doesn’t go. Instead, she lies that she has a family commitment and sets him up with Autumn, a barista at their favorite coffee place. (Max is highly impressed that Autumn knows his coffee order by heart… which I’d find a little more romantic if his order were complicated, and not literally black coffee.)

When Max confronts Zoey about her bizarre behavior, she chalks it up to her new position as his boss, insisting that they need to have boundaries if she’s going to be his manager. But the conversation gets more tense and heated as it goes on, and they end up in a full-blown fight. It isn’t until later, when Max drops off some butterscotch pudding for Zoey’s dad to try, that they finally make up; Zoey acknowledges that she didn’t handle their new work dynamic well, and he seems to admit that dinner at Hand-Picked wasn’t as fun without Zoey there. But after they resolve their fight, Max goes into the living room to pay Zoey’s dad a visit, and she watches with a smile on her face as Max sweetly jokes around with Mitch. (Meanwhile, Max and Autumn seem to really hit it off, and Zoey spies them on a coffee date at the end of the hour.) 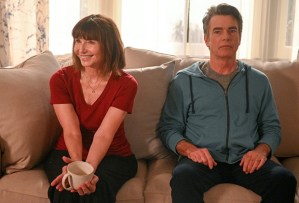 * Mitch’s new medication seems to be working; his supranuclear palsy isn’t cured, but it has slowed down, and he’s able to move his hands and face a bit more. Later, the family discovers that Mitch can answer simple yes-or-no questions with the help of a board game buzzer, allowing him to communicate with them for the first time in a long time. And here’s where Zoey’s new power really comes in handy: When Mitch struggles to communicate something to Zoey’s mom, Maggie, Zoey is able to help when she suddenly hears her father singing Van Morrison’s “Moondance.”

At first, Zoey and Mo suspect that the romantic ditty might mean that Mitch wants to be intimate with his wife. But when Zoey suggests that to her mother (awkward!), Maggie tells her that it isn’t about sex; rather, Mitch told Maggie that he loved her for the first time at a Van Morrison concert years ago, right in the middle of “Moondance.” Zoey smiles, realizing that her dad wants to tell her mom that he loves her — and later on, when Mitch and Maggie have a little privacy, Maggie sings part of the song to her husband, cozying up with him on the couch.

* At work, Zoey and her crush, Simon, collaborate on a new marketing project for SPRQ Point’s latest product — but Zoey micromanages her engineers to the point that they don’t meet their deadlines, and a frustrated Zoey decides to just handle the entire project herself. She pulls an all-nighter at the office to finish all the coding… but even though she gets it done in time, Zoey suspects that she and her team aren’t gelling too well.

Simon encourages Zoey to show her engineers that she cares about them, offering up a sweet anecdote about the way his father used to run his own business. Inspired by the story, Zoey gathers her team for a meeting, and she reads excerpts from the journal entry she wrote on her first day at SPRQ Point. Her writing is full of kind compliments for her coworkers, who she had admired for years before she worked with them, and they all seem touched by her words. Zoey promises the team that she’ll trust them with their own projects moving forward, as long as they trust her some more in return — and everyone is happy to agree to those terms.

* At the end of the hour, Zoey reconvenes with Mo, who has been trying to come up with experiments to test Zoey’s new ability. But Zoey counters that she might not be able to control the power at all; these songs never seem to happen when she wants to hear them, but when she’s meant to hear them. And though it’s not easy for Zoey to relinquish control to the universe, she decides to do just that and let her new ability unfold at its own pace.

Your turn! Did Zoey make a solid second impression? Grade Sunday’s episode in our poll below, then drop a comment with your thoughts!