Carrie’s mission of peace in Afghanistan got a rude awakening this week on Homeland, thanks to not one but two (!) kidnappings.

We pick up right where we left off, with Carrie gawking at Yevgeny as he leaves the Afghan VP G’ulom’s office. G’ulom refers to Yevgeny and his intelligence cohorts as “businessmen,” but Carrie knows that’s not true. She tries to talk G’ulom into walking back his comments about releasing Taliban prisoners, but he’s a stubborn old mule. When she points out that he’ll have to release them eventually if the peace process works, he replies: “Or what?” She leaves empty-handed, and gets more upset when Saul tells her she can’t go after Yevgeny; they made an immunity deal with him to get Carrie released.

She gets a juicy lead, though, when an anonymous tipster points her towards a woman named Samira, who called out corruption under G’ulom’s watch before her husband was killed by a car bomb — a bomb clearly intended for her. Carrie wants to know what she knows, so she has Jenna Bragg set up a fake job interview for Samira as a diversion so Carrie can snoop around Samira’s apartment. During the interview, Carrie finds a USB drive stitched inside a burqa… but Jenna flubs her script and makes Samira suspicious. She tries to flee the interview after snapping a photo of Jenna’s face, and Jenna panics. By the time Carrie arrives, they have Samira tied up in a hotel room with a hood over her head. (Kidnapping #1!) 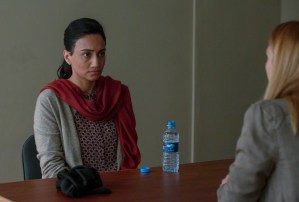 Carrie plays good cop, untying Samira and removing the hood. She shows her the USB drive she found: It contains personnel files left over from Samira’s corruption investigation that clearly implicate G’ulom. (He’s been scamming the U.S. out of tens of millions of dollars, taking money for military bases that were never built.) Carrie wants to use this as blackmail to get G’ulom to take back his prisoner comments — but Samira doesn’t want to let the man who killed her husband off the hook. She wishes the Americans would just get out of Afghanistan already and leave them alone, but Carrie reminds her that without the U.S. there to negotiate peace, G’ulom will be too powerful for anyone to unseat.

She must’ve convinced Samira, because Carrie takes the files straight to G’ulom, accusing him of stealing at least a hundred million dollars. G’ulom shrugs: Doesn’t every politician steal a little for themselves? Carrie thinks his fellow Afghans would kill him if they knew, though, and he seems to agree: He holds a news conference confirming that he’ll release all Taliban prisoners after all. Carrie and her co-workers celebrate with a drink at a local bar… where Carrie runs into Yevgeny. She yells at him to get away from her, but he reveals he’s the one who tipped her off about Samira. Plus, he seems surprised and hurt that she’d be so rude to him — as she remembers begging him not to leave her back in that Russian prison. 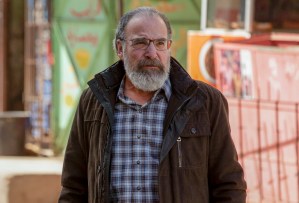 LOOK WHO’S BACK! | Saul gets a blast from the past when Max informs him he’s picked up audio of Taliban leader Haissam Haqqani. (Remember him as Season 4’s Big Bad?) Based on the audio, Haqqani actually wants peace with the Afghan government, so when Haqqani’s second cousin returns home thanks to a prisoner release, Saul enlists him to get a message to Haqqani, reminding him of their shared history and inviting him to meet face-to-face.

Max warns him, though, that he’s seeing a lot of Pakistani intelligence activity in the area, and as Haqqani’s convoy pulls up to meet Saul, a sniper hits them with a rocket launcher, blowing up one car in a massive fireball. In the chaos that follows, Saul is captured and shoved into a truck with a bag over his head. (Kidnapping #2!) He’s taken to an undisclosed location, where he finds himself face-to-face with Haqqani. Saul is overjoyed to see he’s still alive… but Haqqani responds by knocking Saul out cold with the butt of his rifle.

* Tasneem took a side trip to Pakistan, too, and met with an old friend of Saul’s, who’s now confined to a wheelchair and shooting squirrels with a pistol. (Yikes.) She knows Saul is in Pakistan and trying to connect with Haqqani, and his old friend ranted about how the Americans hate them and their attempts at independence. Yep, based on her getting a whole scene here without Carrie or Saul, I’m convinced Tasneem will be a huge factor this season.

* We’ve got new opening credits, people! The footage spans the entire series, including lots of Brody and (sniff) Quinn’s death. It also throws in some tantalizing glimpses of what’s still to come this season, like a scene of Saul angrily screaming at a room full of top military brass.

* Is Jenna just a colossal screw-up… or is she actually a mole working to undermine Carrie’s mission from within? (Sorry, it’s Homeland, I have to ask.)

* R.I.P. Wine-Drunk Carrie. At the bar, she ordered a soda water with lime and laughed that “I’m not as fun as I used to be.” And winemakers all across the Napa Valley mourned in unison.