Rob’s run-in with ex-boyfriend Mac was all sorts of messy in High Fidelity‘s penultimate episode. Will the two exes rekindle their former love, or will Rob’s too-cool-for-school vibe sabotage her once again? Let’s find out.

In a finale flashback, we watch Mac and Rob eavesdrop on a fighting couple who are on the other side of a huge rock in a park. Over copious smooches, they promise that if they ever turn into that war-torn couple, they’ll remind each other what their side of the rock felt like. Back in the present, Rob’s brother Cameron walks into the store: “Hey Rob… you f—king a—hole!” Talk about an entrance.

Cam is pissed that Rob was… a little murky with the details about Rob and Mac’s breakup. He didn’t speak to his best friend for a year because she told Cam that Mac broke her heart. She conveniently left out the part about her cheating on Mac, which infuriates Cam. “Just once, it would be great if you thought of someone other than yourself,” Cam hollers before storming out. 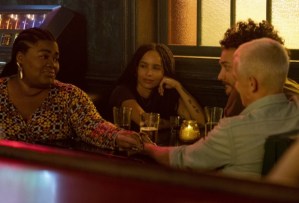 Over drinks, Rob, Cherise, Simon and Blake debate the top five artists who reinvented themselves. When Cherise takes off, Rob asks Simon what the deal is with her. Cherise is working multiple jobs and is actually working at the shop (which is apparently out of character). Simon says she’s saving up for a guitar and asks how Rob could possibly not know that. It certainly reiterates her brother’s jab about her selfishness.

The next day, Mac’s fiancé Lily is waiting outside the record store — and she isn’t happy. She tried to be cool with Mac hanging out with his ex, but now she wants Rob to step off. Rob tells her that whatever she had with Mac was done, but Lily says, “Eff you,” and sulks off.

We flash back again to the night Rob and Mac had their big fight, the same night he returned to give her a spare key when she locked herself out of the apartment. Mac tells her he finally figured out what happened between them. It wasn’t that Rob fell out of love with him, it was that she was in love with him and didn’t know how to deal with such strong feelings. Maybe, he offers, that’s why she did what she did. “What’s really f—king annoying now,” he says, “is that all of the reasons why we broke up in the first place just seem like…” Rob finishes his sentence: “Bulls—t.” Mac then brings up that “other side of the rock” thing and before we know it, the two exes are kissing on Rob’s stoop.

Walking down the street, Rob monologues, “My whole life, every place I’ve ever been, I’ve always had one foot out the door. I guess it just made more sense to commit to nothing… just keep my options open. But that’s just suicide… by tiny, tiny increments.” She makes a phone call to a recipient who doesn’t answer. “I’m coming to you.”

Plot twist: She shows up at Clyde’s house, not Mac’s. She tells him that she’s taken a lot for granted and that she needs to stop living in the past. She wants to start fresh, but Clyde seems over it. She says they can start slow and be friends first, but Clyde doesn’t think it’s a good idea. She pushes and asks him what percentage of a chance there is that they could work it out. He says nine. (Ouch!) She admits defeat and walks away.

Back at the shop, Cherise gets a special delivery in the shape of a guitar case. The guy tells her it’s from Rob. “She said to reinvent yourself and to slay.” Cherise opens the case to find the guitar of her dreams.

The season ends with Mac walking the streets with Lily, Simon hand in hand with Blake, and Rob all by herself. “Nine percent,” she repeats. “Alright, I’ll take it,” she says with a half-smile.

What did you think of High Fidelity‘s Season 1 finale? And what are your hopes for a hypothetical Season 2? Weigh in via the following polls, then hit the comments to flesh out your thoughts.