The search for the next American Idol began again on Sunday, introducing viewers to a new crop of fresh-faced musicians destined for stardom — and also the actress who played “Russian Stripper No. 2” in Hustlers. As Katy Perry explained, that’s the great American dream. “And that’s why American Idol is so important.”

So, is it possible that we’ve already met the next Idol winner? Let’s break down the eight singers sent through to Hollywood from the Season 18 premiere:

DOUG KIKER, 27 | Well, this was a weird way to kick off the new season. After examining this Alabama garbage man’s calloused hands and pestering him with questions like, “Have you ever fallen off of a garbage truck?” the judges sent him out into the streets to “warm up” with Ryan Seacrest. Upon his return, Kiker reintroduced himself to the judges — including Perry, whose sheer beauty reduced him to actual tears — and received an impromptu music lesson from Luke Bryan. Kiker sounded fine, but for the amount of time we spent with him beforehand, I expected a little better. (Sorry!)

CAMRYN LEIGH SMITH, 16 | Perry saw a bit of herself in this Georgia teen who described her music style as “mostly worship stuff, but outside of the church, it’s more secular.” She then blessed the judges with a confident performance of Jessie J’s “Big White Room,” using every opportunity to show off her incredible range and remarkable control. For Perry, it was practically a religious experience. (“It gave me hope again!”) 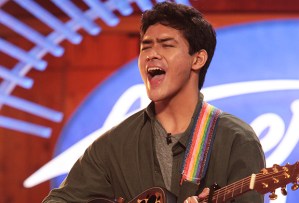 FRANCISCO MARTIN, 18 | A pre-law student with self-confidence issues, Martin was a beautiful bag of nerves when he entered the audition room. (And a brief shot of his jittery panicked parents in the hallway explained exactly where he inherited that nervousness). But as soon as Martin gave the judges a smooth, natural taste of Maggie Rogers’ “Alaska,” they were sold. He even treated them to an original song about an Australian “friend” (wink!) who visited him over the summer. The judges think Martin could be Top 10, or even Top 5, material — and I don’t disagree.

NICK MERICO, 23 | This familiar-looking “hunk-a-saurus” (pictured above) made it to Hollywood Week last season, but he ultimately “backed out” for personal reasons. Even after his brief introduction, I was fully invested in Merico’s story. I needed to know every last detail. So when the judges asked him why he ghosted them, I was admittedly disappointed by his vague response: “Some personal things went down. I had to figure out a lot of things.” That was barely an answer. In fact, I have even more questions now! As for the actual audition, I thought Merico’s performance of Lauren Daigle’s “You Say” was a little too aggressive and pitchy, but the judges seemed to love him. Bryan even called him a “carbon cutout of a teeny bopper heartthrob with tremendous eyebrows,” so he’s basically already in the Top 10.

ARTHUR GUNN, 21 | This kind-hearted soul moved from Nepal to the United States after high school and is currently living in Kansas, where he developed a taste for bluegrass. A part of me honestly believed that the ghost of Bob Dylan temporarily took over Gunn’s body for that performance of “Girl From the North Country.” (Fortunately, the other part of me thought to Google the classic rocker to confirm that he is, in fact, still alive.) And Gunn proved himself to be a man of many voices, channeling Creedence Clearwater Revival for a solid rendition of “Have You Ever Seen the Rain.” Those runs! Just lovely.

LOUIS KNIGHT, 19 | This singer-songwriter from London, now working as a part-time pizza delivery boy in the States, charmed the judges with an emotional original song about a friend’s suicide. Actually “charmed” is an understatement. They collectively suggested that he might be the biggest star that ABC’s American Idol has ever seen. I just wish he looked a little more excited to be there. 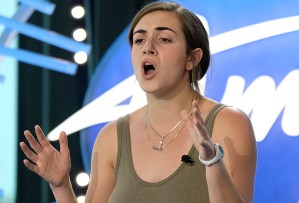 MEGHAN FITTON, 23 | I’ll admit, I had my doubts about this self-proclaimed Bachelor super fan. Her obsession with the ABC property felt a little too synergistic for my liking. But after just a few gritty, growly notes of Alan Stone’s “Love Where You’re At,” it was clear that Fitton is the real deal. “As much as I love The Bachelor, I’m not here to be the next Bachelorette,” Fitton said. “I’m here to be the next American Idol.” (Color me cynical, but you know that we’ll be seeing that clip again when Fitton inevitably ends up on The Bachelor someday.)

JUST SAM, 20 | This Harlem-based singer has managed to turn subway performing into a lucrative hustle, though I have to take issue with her blanket assessment that “the underground world is beautiful.” I appreciate that the subway gets me around the city (sometimes), but I’ve also seen too much rat sex to ever consider it “beautiful.” My innocence is gone. … Anyway, Sam got off to a rocky start, breaking down midway through a performance of Lauren Daigle’s “You Say.” (What is with that song this week?) Fortunately, she made a quick recovery, turning out a beautiful rendition of Andra Day’s “Rise Up.”

As for those who didn’t make it to Hollywood… Honestly, the planet is dying and we don’t have time to break down each of their forgettable auditions. All you need to know is that some guy named “The Comeback” did The All-American Rejects very dirty with a tragic performance of “Swing, Swing.” Am I glad we’re talking about that song again? Sure. I just wish it was under better circumstances. Also important: One of the women who auditioned in the premiere played a stripper in the movie Hustlers. She did not sing well.

Your thoughts on Idol‘s 18th season premiere? Vote for your favorite auditions below, then drop a comment with your full review.