It’s a classic tale: Boy gets bullied in high school. Years later, boy is forced to road-trip with his onetime tormentor. Boy and boy become friends… and something more? That’s the story at the center of The Thing About Harry, Freeform’s same-sex romcom starring Grey’s Anatomy’s Jake Borelli and newcomer Niko Terho as former small-town classmates who reconnect in college.

Initially, the Peter Paige and Josh Senter-penned flick (premiering Saturday at 8/7c) was “kind of a Hallmark-y Christmas movie with two guys falling in love,” says Paige (Good Trouble, The Fosters), who also directed the movie. But when he was brought on board to rewrite the script, he decided to make it more relatable, not only to himself but also to the network’s audience. “I didn’t grow up in a small town. I don’t really know this world,” he explains. “I was like, ‘If you’re looking for a young, kind of Freeform-esque gay romcom, that I can give you.'”

In addition to updating the location and tone, Paige gave the character of Harry — yes, his name is a nod to When Harry Met Sally — a millennial twist: He identifies as pansexual. “In a recent survey, more than 50 percent of high-school students identified as something other than straight,” Paige says. “It just became really clear to me, as I was thinking about young people, they talk about sexuality in a different way than my generation did. It’s very, very multifaceted, and just having this movie be about two guys identifying as gay, I just thought the odds of that are kind of slim, and it’s not the freshest, most modern, most accurate take on the generation that I was writing about.”

Below, Paige talks about Hallmark’s influence, winning over viewers who don’t want to watch a gay love story and how the movie is most subversive in its universality. Plus, he reveals how he found Freeform’s newest heartthrob.

TVLINE | Hallmark came under fire not long ago for its lack of diversity and inclusiveness in its holiday fare. Was any part of this movie a response to that and a correction of sorts?
No. When that whole big kerfuffle came up recently, we’d already shot the movie. But in a bigger, broader sense, this movie is very much a response to a lack of queer characters in that TV-movie landscape. 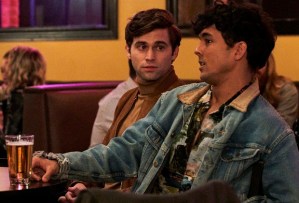 TVLINE | Did you have a particular message that you wanted to leave viewers with at the end of this movie?
There’s the message of the movie, which is like, you will find your person, someone will see you, someone will appreciate who you actually are, and you’ll find your great love. But that’s the message of every romcom. What I think is interesting about the fact that this is about two guys is, in very much the same way that The Fosters was this kind of traditional family drama about a non-traditional family, this is a traditional romcom about two young men falling in love. I think the most subversive takeaway from it is just the sort of startling similarities in all of us. We all just want to be loved. It’s that simple, and I think, especially in the kind of highly polarized culture we’re living in right now, it’s really easy to forget that underneath it all, we all have the same wants and needs.

TVLINE | As we’ve seen with Hallmark, there are still people who are going to say, “This movie isn’t for me.” What would you say to them?
I would say, “Give it half an hour. See how it feels.” One of the things that was really important to me as a director was that this movie feel like a big studio romcom, [so] when you enter the world of it, it feels the way that putting on your favorite bathrobe feels. It’s cozy, it’s familiar. You just washed your bathrobe, so it smells really good, and it’s fresh, but it’s still that bathrobe that you know and love. Anyone who enjoys a romcom of any kind can have a great couple of hours with us on this journey. 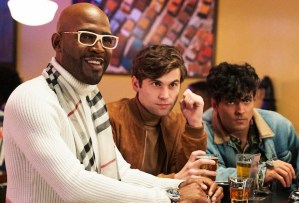 TVLINE | What are your favorite romcoms? Are there any particular ones that you drew inspiration from?
I am a giant romcom fan. They are in my blood. I watch them all, and I watch them often. [Laughs] It wasn’t like I had to go back and kind of rewatch, or like I was trying to kind of rip something off from somewhere. I did want this movie to be an homage to those movies. I did want it to have all the trappings of a great romcom but also be specific and have its own kind of delightful twists and turns. I feel like we really managed to accomplish that. My favorite romcoms… While You Were Sleeping is one of my favorite movies of all time. Despite the challenging politics, I love Pretty Woman. I love When Harry Met Sally. Oh, my God, there’s so, so many, but those are a few.

TVLINE | The success of a romcom really depends on the chemistry between the leads. In Harry’s case, Jake, I recognized from Grey’s. Niko, I’ve never seen anywhere before, and I was completely charmed by him. Can you talk about the casting process for this movie?
[Grey’s showrunner] Krista Vernoff is my best friend of 30 years. We were at dinner right as this movie was starting to come together. I think the network had just told me they were going to hire me to rewrite it. I was pitching her my take on it. As I was describing the character of Sam, she went, “Oh, you mean like Jake Borelli,” and I was like, “Oh, I do mean like Jake Borelli. It hadn’t occurred to me, but yes, that’s a great idea.” So I wrote the movie with him slightly in mind, and then the movie got greenlit and the network said, “We love the idea of Jake. We’re ready to make an offer,” and I said, “Oh, shoot, let me make a phone call,” called Krista, and she was like, “Oh, honey, I can’t give him up. We’ve got a crossover event [with] Station 19. There’s no way,” and I was like, “Oh, bummer. OK.” [We] went on about casting, but I couldn’t get him out of my head, and just before we got into chemistry reads, I called her back and was like, “Is there really, really no way you can clear Jake for just three weeks?” and she was like, “Ugh, give me an hour,” and she called me back and said, “I wouldn’t do this for another living human on the planet, but you can have him.” So that’s how Jake came to the project. We sent it to him, and he loved it, and he’s just so incredible in the movie. 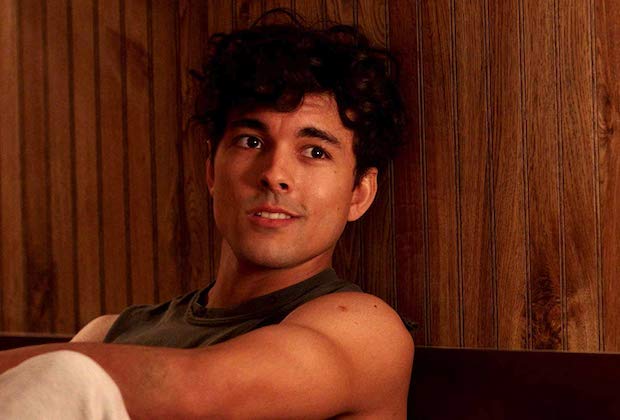 And then when we were looking for Harry, again, we were reading actors and found lots of good guys, but nobody who really just like made it all come together until, all of a sudden, we got this tape out of New York. [Niko] was a professional soccer player. He’d been taking acting classes in New York, he was in the ABC diversity showcase, he got an agent. This was his first audition ever. We flew him to L.A. a couple of days later, he chemistry-read with Jake, and the rest is history. I can’t believe what he managed to accomplish in his very, very first job on camera ever.

TVLINE | As I was watching the movie, I was thinking to myself, “This guy is a total Freeform heartthrob. I wonder how long it’ll be before he’s on Good Trouble.”
Absolutely. He reminds me of a young Noah Centineo, actually.

TVLINE | Have you thought about what kind of role you can work out for him on Good Trouble?
Maybe not necessarily on Good Trouble, but I definitely have him in mind for something I’m working on. [Laughs] And how great is Britt Baron [who plays Sam’s best friend Stasia]? She’s fantastic, and I just love her work. That young woman is a young woman we haven’t quite seen on TV. I just love what she did with the part.