Thursday’s Grey’s Anatomy not only promised to reveal whether Link or Owen was the father of Amelia’s baby (but didn’t!), it reunited MerLuca in a big way and dropped our first clues about how Justin Chambers’ exit as Alex was finally going to be explained. Read on, and we’ll go over all the deets of the Jesse Williams-directed episode. 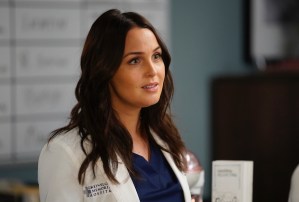 ‘LINK LOVES YOU — STOP AVOIDING HIM’ | As “Save the Last Dance for Me” began, Meredith and DeLuca woke up in bed together to find a text that said that Suzanne had had chest pains overnight. He quickly revealed that he’d used his girlfriend’s name to entice a diagnostics whiz from UCSF — Dr. Lauren Riley (Supernatural’s Shoshannah Stern) — to consult on the puzzling case. At Pac-North, Richard broke it to Owen that their hospital had been purchased by… well, his wife. “Now we have to report to Grey Sloan and interview for our jobs,” he added — with Koracick. Just then, Maggie arrived for her first day at Pac-North, blissfully unaware of what had transpired. At Grey Sloan, Nico gently informed Levi that they weren’t at the cohabiting step of their relationship, so his boyfriend needed to find his own place, stat. When Amelia bumped into Jo, Dr. Karev lectured Link’s lover about having kept him in the dark. He might look like a Ken doll, but he had feelings, dammit. In no time, Amelia deduced that Jo was going through something every bit as much as Link was. “Alex hasn’t been returning my calls,” Jo admitted. He’d only told her that he’s been going through something and needed time — which she suspected was revenge for when she’d needed time. (But that doesn’t really sound very Alex-y at all, does it?) 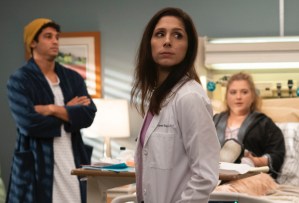 When Dr. Riley arrived, she informed Suzanne that she was going to run a bazillion tests — some of them for a second time. And she wasn’t nearly as keen on working with DeLuca as she was with getting to Mer already. Upon learning that Suzanne wasn’t really Grey’s patient, she’d only consulted, Dr. Riley was ready to bolt. “But you’re too good to just walk away,” DeLuca suggested. And, much to Lauren’s chagrin, he was right. Before the patient underwent a procedure with Maggie, she marveled at how much her daughter — who’d accidentally been outed by her aunt — must need her super cool mom right about then. All the more reason that she had to get better! Once Suzanne had come out from under anesthesia, Dr. Riley proposed that they cut off all treatment, to see whether the many drugs she was on were masking the underlying condition that was the big problem. Suzanne’s sister was livid over the idea. So Dr. Riley appealed directly to her — if she was in Suzanne’s position, she’d want her favorite sister to make this impossible decision for her. In the end, they agreed to cut off treatment. (After which Lauren admitted to DeLuca that she was an only child.) 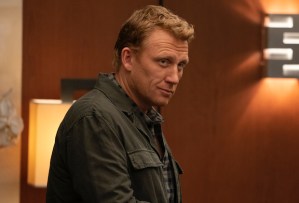 ‘GOD, HOW I MISS O.R. 2’ | During Richard’s interview with Koracick… well, it wasn’t an interview at all, really. Tom informed Webber that Catherine had told him her soon-to-be-ex-husband’s job was safe. She just wanted him back at Grey Sloan. And Richard had thought that he could do that. But nope, he wouldn’t, couldn’t (!) let Catherine move him around like a pawn. Or a bishop. Or even the queen that Koracick suggested he was to his estranged missus. When it was Maggie’s turn, Tom told her that she still had a job. But her department was no longer hers — having left him in the lurch, she’d be working under Teddy. When Owen balked at being made to wait till Koracick had interviewed even the residents, Tom promised to get him outta there in time for his wedding. (Snap.) At least the turmoil seemed to allow Jackson and Maggie to be in one another’s proximity without sniping at one another. That night, Jackson found Richard sitting outside Grey Sloan. His stepson told him that he did, too, know where he worked — he worked there at Grey Sloan, whether he liked it or not. Jackson even seemed to think that soon enough, Richard and Catherine would be laughing about their “split.” Moments later, Jackson reported to Mer and Bailey that Richard had walked, and he wanted to, too. Were they just gonna take this BS or fight back? Choosing the latter, Mer, Richard, Bailey, Owen and Jackson stormed the conference room to point out to Tom that he couldn’t afford to let all of his best doctors quit. “We’re a family,” Bailey said. And he didn’t get to screw with their family. That being the case, Richard and Owen were rehired, Maggie and Teddy would be cardio co-chiefs, and Cormac and Alex would be peds co-chiefs (as if that was going to be an issue). And best of luck, Tom, finding the co-budget to co-pay for all of those co-chiefs! 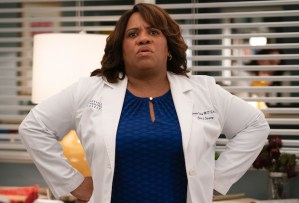 ‘I MADE A PROMISE THAT WE WOULD NEVER SPLIT UP’ | When young Joey from Station 19 was done being treated by Nico, Bailey broke it to him that his foster siblings had been taken away by social services. He did not take it well. Shortly, Jo found him trying to sneak out of the hospital. “Nurse Jones” had said it was OK, he lied. Later, Bailey reported back to him that social services tried to keep siblings together. But they weren’t his biological brothers and sister, Joey exclaimed. Taking the lead, Jo insisted that he not do anything rash. Of all people, she understood what he was going through. “But you can’t help them if you’re dead.” While operating on Joey, Bailey revealed to Jo that she’d done some research on the boy — he was a good kid. Make that a great one. And Jo knew that no one was going to adopt a 17-year-old. That evening, Jo assured Bailey that Joey’s case in the foster system wasn’t hopeless, it just wasn’t easy. (But you could see the wheels turning in one — or was it both? — of their heads… )

‘WHAT’S GONNA HAPPEN THEN?’ | Off her talk with Jo, Amelia paged Link to the plant room to ask what would happen if it turned out that the baby was Owen’s. He’d said he loves her. Did he love her enough to be in her and this baby’s life no matter what? In response, Link admitted that he couldn’t pretend that he didn’t think her history with Owen would impact their future if the baby turned out to be her ex-husband’s. So basically, they’d have to wait and see. Later, the former marrieds ran into one another while Owen was trying not to let steam come out of his ears over Koracick. “You stole his girlfriend,” Amelia reminded him. So “just let Tom have his fun — or his pain. He’s lonely.” Owen was awestruck: How did she manage to feel everyone’s feelings so much and so well 24/7? As the episode drew to a close, Amelia texted Link that she hadn’t taken the paternity test yet — she needed time.

‘I USED TO BE A ROMANTIC’ | In other developments, Cormac, whose kids were visiting Grey Sloan, continued to charm Mer (or at least us). Levi treated a cancer patient named Irene who was living her best life with her husband for as long as she possibly could. Which wasn’t going to be much longer, Schmitt and Grey sadly had to report. Irene’s husband, having taken a shine to Levi, asked for his help in setting up the cafeteria like a ballroom so that the dance enthusiasts could have one last twirl around the floor. (To the tune of “Moon River,” no less.) Later, while Mer observed that once upon a time, she would’ve been the one setting up the makeshift ballroom for the doomed couple, not a resident, Irene asked Levi if he’d met the love of his life yet. He had, but he had difficulty communicating that to Nico. If they were on the same page, they might’ve been reading different books. Finally, Jo returned home to her and Alex’s empty apartment. Unless I miss my mark, she was definitely considering filling it with Joey and his siblings.

So, what did you think of the episode? Alex more or less ghosting Jo? Amelia not going through with the paternity test? The nutty way Team Grey Sloan was reunited? Hit the comments.