To All the Boys: P.S. I Still Love You, the sequel to 2018’s highly popular To All the Boys I’ve Loved Before, debuted Wednesday on Netflix — but was it the early Valentine’s Day gift you were hoping for?

Not long after Lara Jean (Lana Condor) and Peter (Noah Centineo) enjoy a perfect first date, the movie throws a curveball into the couple’s nascent relationship: a letter from John Ambrose (Rent: Live‘s Jordan Fisher), the last recipient of Lara Jean’s love letters. She rushes upstairs to read what her former crush wrote to her — mainly, that he was happy to hear from her and he can’t believe how eloquent she was at 11. “Does he like me now?!” Lara Jean wonders. She begins to write him back — it’s only polite to reply, right? — but each of her attempts to be cool devolves into what sounds like the start of another love letter, so she tosses the half-written notes. 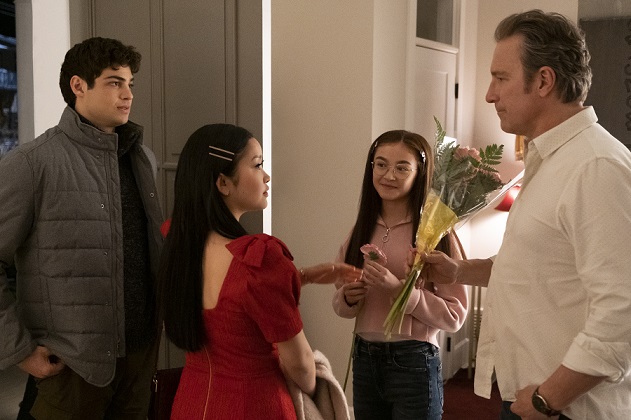 As for the actual couple, Peter and Lara Jean’s first Valentine’s Day is sweet: He gifts her a necklace and recites a poem, while she bakes him turnovers and makes her own card. But Lara Jean, who’s never been a girlfriend before, also can’t get out of her own head. Insecurities and doubts fill her mind: Should she be dressing up for Peter’s games? How did Peter get so good at making out? Did he and his ex Gen (Emilija Baranac) have sex a lot? Those last two questions come up while LJ and Peter are getting kind of hot and heavy in his car. Using her metaphor, Peter reassures her, “I promise, if you ever decide to go BASE jumping, that I would love to go with you. It’s just a… It’s a big decision to jump off a cliff, so… remember that.”

Meanwhile, Lara Jean is volunteering at Belleview, a retirement villa where she befriends Stormy (Two and a Half Men‘s Holland Taylor), a glamorous resident who’s Lived A Life. Also helping out at Belleview: the sensitive, soulful John Ambrose! Surprise! After the initial shock wears off, Lara Jean asks him to bring the letter she wrote. She doesn’t remember what she said and wants to know how mortified she should be. He agrees, with the caveat that she gives it back, because he needs proof that someone liked him in middle school. Lara Jean says everyone liked him, but John Ambrose replies that he didn’t care about everyone. When Lara Jean reads her letter, she’s taken aback at what she wrote: “I’ll always know that, once upon a time, my heart was yours.”

Lara Jean and John Ambrose later decide to dig up their old time capsule — along with their friends, she suggests, clearly to his disappointment. When she sees Peter and John Ambrose together, Lara Jean realizes what a bad idea the gathering was, especially given that she hasn’t told John Ambrose that she’s dating Peter. Her boyfriend, of course, doesn’t react well to that, and the couple has their first spat. It almost feels like a breakup, but Peter embraces her and says, “Let’s never fight again, OK?”

Sadly, that peace doesn’t last long, though. Chris (Madeleine Arthur) spots Peter looking chummy with Gen, which prompts Lara Jean, in full game day attire, to confront her boyfriend. Peter insists that Gen just wanted to talk about what’s going on at home, but Lara Jean is tired of him always running to his ex’s side. “When there was an actual choice, I picked you,” he notes. Lara Jean wants to know what he means by “an actual choice.” It turns out Peter knew that Gen recorded the video of them — but how did she know he was going to be in the hot tub? Well, you aren’t going to like this: Peter was waiting for Gen that night when Lara Jean showed up.

Lara Jean realizes that if she hadn’t come down, Peter and Gen would be together, and she and Peter wouldn’t have happened. “Maybe that’s how it should be,” she tells him. Peter reminds her that they promised not to break each other’s hearts. “I think we both made promises we couldn’t keep,” she replies. Then in a heartbreaking sequence, Peter approaches Lara Jean on a field trip. She asks if he’d like his necklace back. “Yeah, sure,” he stammers, but that’s clearly not what he wanted. He helps her unsnap the clasp before walking away without a word.

With time, Lara Jean has an epiphany about her relationship and invites Gen to the treehouse. “I realized the person who couldn’t get over you was me,” Lara Jean confesses. Gen, in turn, admits that Peter tells her all the time how crazy he is about Lara Jean. And she doesn’t call him to hurt Lara Jean, Gen explains, but because her parents are splitting up, and Peter’s been through it. Then Gen reveals that she, like Lara Jean, also put their friendship bracelet in the time capsule. It’s a much-needed moment of understanding between the two girls. 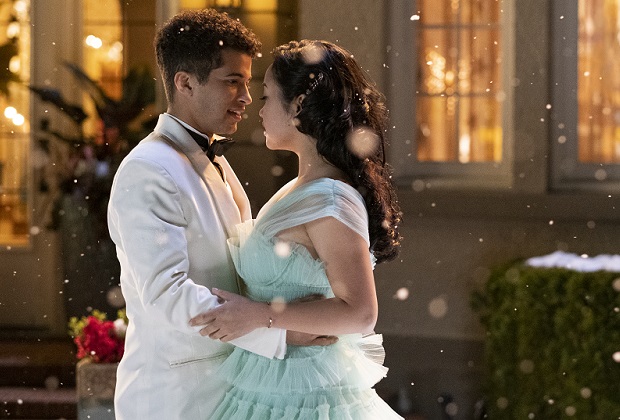 Back at Belleview, Lara Jean agrees to dance with John Ambrose at the retirement community’s Star Ball. After she informs him that she and Peter broke up, they share a kiss in the snow. But during the lip-lock, she realizes that she wanted him to be someone else. Stormy tells her that sometimes you need to kiss the wrong guy to know what’s right. So Lara Jean rushes off to go find her ex… but he’s already outside Belleview! He remembered that she doesn’t like to drive in the snow. (Feel free to take an “Awww!” break here.)

“I love you,” Lara Jean responds, to which Peter, of course, replies, “I love you, too,” as the couple kisses.

Love was also in the air for Lara Jean’s dad (John Corbett) and their neighbor Trina (I Feel Bad‘s Sarayu Blue), who ended up holding hands after some meddling from Lara Jean and little sis Kitty (Anna Cathcart). Even LJ’s friend Chris found herself cozying up to Peter’s buddy Trevor (13 Reasons Why‘s Ross Butler)! But sadly, Lucas (Trezzo Mahoro) was just left to lament how there are only two gay guys at their school.

* Wasn’t it weird that Josh wasn’t even mentioned, given that the sequel, presumably, picks up very shortly after the first movie? He was Lara Jean’s friend, neighbor and classmate, and he just disappeared…

* When Lara Jean chose to volunteer at a seniors’ retirement community, did you expect something less… swanky? Is Belleview a retirement home for the one percent?

* I haven’t read the books on which the movie franchise is based, but I’ve been told that Stormy is John Ambrose’s great-grandmother in the novels. Why eliminate that detail from the movie? Wouldn’t it have made the convenient coincidence of John Ambrose also volunteering at Belleview a little easier to swallow?

What did you think of the rom-com sequel? Grade it via the poll, then hit the comments!