At the risk of sounding like High Fidelity‘s main character: The perfect cover version of a song is tricky to pull off, right? It has to maintain the spirit of the original, while also putting a fresh spin on it that makes you hear it in a new way. Hulu’s new take on High Fidelity — premiering this Friday, Feb. 14; I’ve seen five of the ten episodes — is a cover of sorts, too, and it does a pretty solid job of taking what was great about the original book and movie and adding a modern, hipster-y vibe to it. Early on, it hews a little too closely to the source material, but when it ventures out on its own, it quickly finds an easygoing groove, thanks to an altogether charming lead performance from Zoë Kravitz.

The Big Little Lies alum stars here as Rob (the role played by John Cusack in the 2000 movie version), a terminally single, weed-smoking Brooklynite who owns a record store that only sells vinyl — a glowing “No CDs” signs hangs prominently on the wall — and narrates her inner monologue to us, a la Fleabag. Now High Fidelity doesn’t get as deep or as stingingly funny as Fleabag did, but Kravitz helps it come close: She has an appealingly chilled-out charisma here, even when Rob is neurotically obsessing about her dumpster fire of a love life, and her to-camera confessions help us connect with Rob as she lists off her all-time Top 5 most memorable heartbreaks. One of those heartbreaks is still very fresh, too — Mac (The OA‘s Kingsley Ben-Adir), who she’s not totally over yet — and seeing Rob pine for the love they had and lost adds a layer of sincere melancholy to her story. 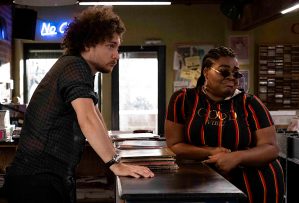 Most of High Fidelity, though, is a laid-back hangout comedy, with Rob spending her days and nights with her record store co-workers: her ex Simon (Mindhunter‘s David H. Holmes), a grade-A music nerd who’s come out as gay since he and Rob dated; and Cherise (Empire vet Da’Vine Joy Randolph), who fills the Jack Black role as High Fidelity‘s merry agent of chaos, grooving to “Come On Eileen” and flying into a rage when a customer dares to use Shazam instead of just asking her what song is playing. (When a glum Rob wears a drab sweater to work, Cherise asks Simon, “Does she seem sadder than usual, or is it the sweater?”) Really, once you get past the premise, TV comedies are all about assembling a group of people you want to hang out with each week, and High Fidelity has put together a fun little trio to spend a half-hour with. (Oh, did I mention the episodes are only a half-hour long? Such a bonus, in this Peak TV era!)

As you might expect, the show also has an impeccably curated music soundtrack: Questlove is credited as the executive music producer, and I found myself heading to Spotify more than once to check out songs from the first few episodes. Music lovers would feel right at home roaming the aisles of High Fidelity‘s Championship Vinyl, where Rob and her cohorts go off on sprawling rants about David Bowie’s best albums and debate the merits of still listening to Michael Jackson and Kanye West in today’s climate. (Not that it’s great for business: One of the show’s running jokes is that the store is always empty, with the employees’ music snobbery alienating nearly every potential customer.) There’s a palpable love of music in all forms here, and that bleeds through in every scene.

High Fidelity does take a few episodes to find its footing: Too often in the early going, it plays as a straight copy of the movie, down to the exact scenes and dialogue. But it does eventually branch out, and successfully so, with Rob getting a few new love interests, including Jake Lacy (The Office) as a strait-laced blind date and Thomas Doherty (Legacies) as a sexy Scottish rock singer. By the time Episode 5 rolls around, with the great Parker Posey guest-starring as a kooky artist looking to unload her cheating husband’s mega valuable record collection, High Fidelity has established a funky, unassuming charm all its own. It’s kind of like your favorite local dive bar: nothing too flashy, but a reliable combination of fun people, a killer jukebox and good vibes.

THE TVLINE BOTTOM LINE: Hulu’s High Fidelity is a solid cover that expands on the original, with a charming lead performance from Zoë Kravitz.