The end is growing ever closer for CBS’ Criminal Minds. And that means big decisions loom for many of those who have called the BAU home for the better part of a decade and a half.

This Wednesday at 10/9c — airing at a later time, leading out of Survivor‘s two-hour season opener — the long-running crime drama serves up its antepenultimate hour, during which not one but two agents will be met with career decisions to make. JJ Jareau, who not long ago cheated death, is one of the vets about to navigate a fork in the road.

TVLine invited A.J. Cook to revisit the series’ recent JJ/Reid romance tease, as well as preview this week’s episode and then the series finale (which is titled “And in the End” and airs Feb. 19 as the second of two episodes). 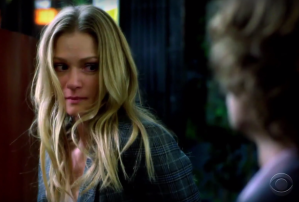 TVLINE | To start, let’s rewind a bit. Tell me about your reaction to last season’s finale and how this season opened, and the tricky thing that you and Matthew had to do, selling this possible turn in the relationship while also honoring who these characters have been.
Well, it was a balancing act, for sure. I had so much anxiety about the whole thing from the get-go, but I just trusted in the process and I think it worked out really well. After doing a show for as long as we have, I feel like we somehow earned the right to go there, even though it’s not what we usually do. It was a really interesting twist, and it definitely made both of our characters grow in the areas that they needed to grow. It’s that thing of the “underlying crush” or whatever that is, or the intimacy and friendship between those two and the lines that get mucked up in between, where things needed to be said. And now they’re better off for it. Sometimes, you have to let go of something to have it really come back home, so I think it was really brave of our writers to do that.

TVLINE | I was relieved that there wasn’t a soapy moment where Will overheard them talking about their mutual “love” in the hospital.
Yeah. I think they handled it really well, and Matthew [Gray Gubler] did a great job with his end of it. He and I always worked well together, and then when you throw Josh Stewart, Will, into it all, it just kind of worked out. 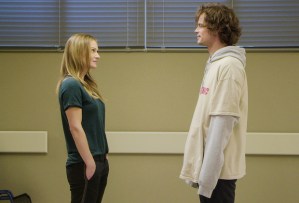 TVLINE | There was a recent moment, after Matt and Kristy’s baby had been born, where JJ senses that Reid had just met someone and she urged him to go hang out with this new person. You had to play this look which kind of melted from happiness to a bit wistful or melancholy… and back to a certain contentment.
Nothing is simple. Everything’s complicated. There are so many emotions involved when it comes to relationships. For me, that scene was really the bow that tied it up nicely, I think. She loves him so much, she wants him to just be happy — and whatever that is, she will support 110 percent the same way he will support her. It’s really this beautiful love story in a way, though not your standard love story. It’s a love that transcends. It’s unconditional.

TVLINE | What’s going on this week in the series’ antepenultimate hour? The synopsis reads, [Dramatically] “Prentiss and JJ are faced with important decisions to make about their futures!”
Dun-dun-dunnnn! Yeah, JJ gets an offer to run an office, in New Orleans. But in fact, both ladies, Prentiss and JJ, are faced with big life decisions as far as job and career, family and love. Especially after all of the drama and turmoil with getting shot and then the JJ/Reid situation, I think JJ is really stepping back and looking at her life. She’s playing around with the idea of leaving. 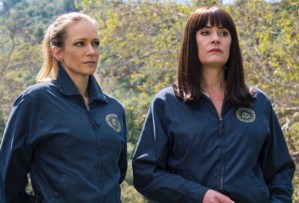 TVLINE | Might there be characters beyond JJ and Prentiss who have these kinds of series-ending decisions to make?
The answer to that is a huge yes. There’s a lot. So much so that [JJ’s] situation is probably the least [of concern], because there are other, really big ones going on. There are a lot of big life changes going on for the BAU and everyone there.

TVLINE | Aubrey Plaza sneaked up on us and returned last week, as Cat Adams.  Are there any more surprise guests during these last three episodes that we maybe haven’t heard about?
We go into some flashbacks, which is a nice callback for all of our super-loyal fans that have been there from the beginning. We’re also going to see a lot of old faces that we thought were gone. It’s been a fun final season, to kind of dig through the old files of Criminal Minds and pull out the old characters.

And then also there’s this Chameleon that keeps getting away from us and is making our lives hell. Obviously, we’ll get to see the fabulous Michael Mosley again. So… there’s a lot. There’s a lot to happen still, and we only have a couple of episodes left. 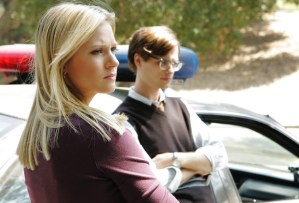 A.J. Cook and Matthew Gray Gubler in a 2006 episode of Criminal Minds

TVLINE | How would you describe the series finale (written by showrunner Erica Messer and cast member Kirsten Vangsness)?
It’s very nostalgic. For me, it’s a little bit like a yearbook — or, a 15-years-book. The way to really put it in perspective is that we all went to kindergarten together, and now we’ve graduated high school. It’s like we’re going off to college, and to wrap up as best you can all the experiences we had in that amount of time is a tough thing to do.

TVLINE | Having seen it, I don’t think it is a spoiler to say that there is a great montage of all the backyard parties.
I know! Rossi’s backyard, all the weddings, all the post-case celebrations…. There’s a really great family vibe, and I think that’s what we wanted to give our fans. That was our farewell from our family to yours, to say, “Thank you for being here with us.”