First things first: You would have to be one seriously hardhearted bastard not to love The Thing About Harry, Freeform’s belated gay Valentine (premiering Saturday, Feb. 15, at 8/7c). Its leads — Grey’s Anatomy’s Schmitt, Jake Borelli, and newcomer Niko Terho — have chemistry for days. The script, co-written by director and co-star Peter Paige (Good Trouble), goes down as easily as a box of chocolates. Rare is the bestie/wingwoman who’s as appealing as Britt Baron (GLOW). And the movie’s “Will they or won’t they?” moments are way more loaded than they have any right to be. (Will they or won’t they? Of freaking course they will!)

That said, Harry is a classic romcom for both better and worse. Once smartypants Sam (Borelli, blocks if not miles from Grey’s nebbishy Glasses) is forced to reconnect with his now-out former high-school bully Harry (Terho, wielding his crooked smile like a lethal weapon), there’s little no doubt that these opposites will not only attract but discover that they were never really opposites to begin with. Reinventing the wheel, Harry ain’t. The movie goes on to trot out a whole lotta the genre’s clichés (right down to the tried-and-true “You’ve got an eyelash on your cheek” bit). And it further normalizes the lookism that gave Love, Simon its unpleasant aftertaste. 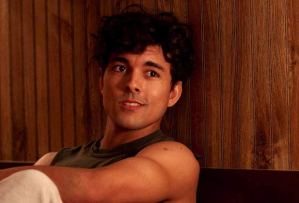 But to quibble with Harry, when it sticks at least the first of its two landings and left even this hardhearted bastard misty-eyed, feels like the equivalent of saying that if love isn’t perfect, it isn’t worth it. It is worth it. And in an age when the broadcast of a gay couple’s kiss can still somehow be “deemed controversial,” a movie like this isn’t just cute, fun and swoon-inducing, it’s important.

THE TVLINE BOTTOM LINE: Like Sam, you might want to resist Harry. The thing is, you’re not going to be able to. It’s as delightful as it is predictable.