The CW’s Black Lightning this Monday lit up the screen with an action-packed team-up episode that nearly rivaled any of the group fights in your typical, well-hyped Arrowverse crossover episode.

Leading up to the mission to rescue Lynn from the Markovian compound where she was being forced to create meta-stabilizing serums, you got the sense that this team-up could be something special, especially when the likes of Grace and Khalil got enlisted. And yet in its execution, the escapade entirely exceeded any expectations.

With Gambi and TC (a very cool and handy character, BTW) running comms, Black Lightning, Thunder, Lightning, Grace, Khalil, Brandon/”Geo,” Erica and Gardner infiltrated Mosin’s base — though by this point, the colonel had been relieved of his command by Gravedigger (guest star Wayne Brady), a metahuman with super strength and speed and the power to “push”/compel people with his voice. And that is a damn trifecta of powers!

Throughout the mission, everyone got the moment. Grace shapeshifted into Mosin, completely fooling me. Black Lightning, Thunder and Erica collaborated to knock down a frighteningly impenetrable door. Lightning zapped goons aplenty. Brandon nearly brought the whole place literally down upon finding Dr. Jace. And we all came to realize that we could watch Khalil go mano a mano with Gravedigger every day of the week and twice on Sundays.

Lynn herself played a key role in her liberation, by craftily eluding Gravedigger’s “push” ability — and then later co-opting it for herself, compelling Mosin to lead her to the outside.

Oh, and for good measure, Jefferson learned from the ASA that in addition to rescuing Lynn, they needed to also bring back Tobias, setting the stage for a very complicated “reunion” between the longtime adversaries. 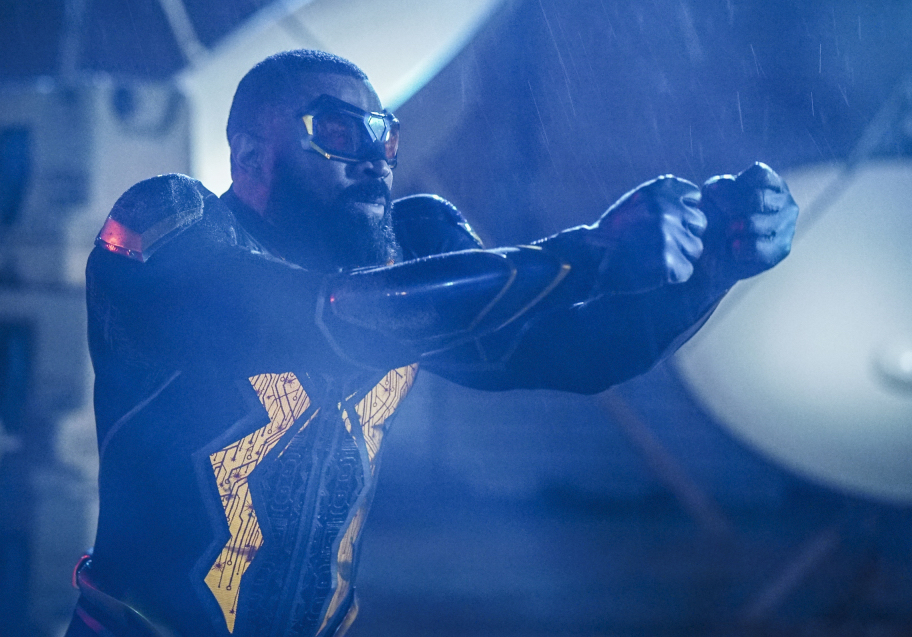 After besting Khalil, Gravedigger confronted and gained the upper hand on Black Lightning, zapping him unconscious with his meta-dampening rifle. Gravedigger then cast a cloud on the other heroes’  reunion aboard the military transport, by demanding that Lynn be released back into his custody, lest everyone die. (“Let’s make a deal,” he basically said.) But just as Lynn deplaned and Gravedigger “pushed” the others to shut the door and take off, Black Lightning came clambering out of the bunker to fire bolts into the cocky meta, raising him off the ground and then slamming him right back down. Jefferson and Lynn then shared an emotional reunion, finally, after so much personal drama and physical separation.

But was that but a battle, and the war is yet to be fought in the next episode (airing in, ugh, two weeks), with Markovian troops surrounding Freeland…?