As Homeland returns for its final season after a nearly two-year break, we all want to know what Carrie Mathison’s been up to… and she’d like to know that, too, actually.

Sunday’s Season 8 premiere finds Carrie at an Army medical center in Germany, recovering from the seven months she spent in a Russian prison. She’s getting better, weaning herself off of anti-anxiety meds and running laps in the yard, but she gets a rude awakening when she’s ushered into a supposedly friendly interview with a fed named Jim Turro. She explains that the Russians withheld her psychiatric meds, so she went into “a florid psychosis” and doesn’t remember much after that. She wants to be reinstated at the CIA, but Jim tersely informs her that she failed her polygraph — on “quite a few” questions, actually. She doesn’t understand: She did reveal the location of an abandoned base to appease them, but insists she didn’t give up information on any active assets. But how can she be so sure if she doesn’t remember anything, Jim wonders? 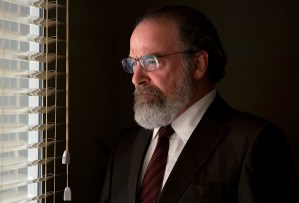 Meanwhile, Saul — now the President’s national security advisor — is in Qatar trying to hammer out a peace treaty between the Taliban and the Afghan government. It’s derailed, though, when the Afghan VP announces on TV that they were tricked into releasing Taliban prisoners, and vows never to release even one. Saul scrambles to keep the Taliban delegation from leaving, and has to offer an accelerated release for Taliban prisoners in U.S. custody to keep them at the table. He clearly needs help, so he heads to Carrie’s facility and tells her doctors he wants her to join him ASAP. Turro is worried she could be a “compromised officer,” but a fiery Saul reminds him of how much Carrie has sacrificed for her country; he’ll need more than “a jumpy polygraph” to lose faith in her.

Carrie doesn’t hesitate when Saul asks her to fly to Kabul to help get the Afghan VP to walk back his comments, even after he warns her it’s “ten times more dangerous” there than she remembers: “Hell yes,” she says. She’ll be working with station chief Mike Dunne there, who Carrie pointedly says is not the “alpha” they need in this situation — and who Turro calls to say a “compromised” Carrie is on her way. When she arrives in Kabul, Mike Dunne is clearly still a little salty about their previous encounters, and when she texts Saul, we see that Dunne is spying on her communications. He also introduces Carrie to team member Jenna Bragg, who’s only been there a month and is still getting her feet wet. Carrie’s advice? “Don’t whine, and don’t take no for an answer.” 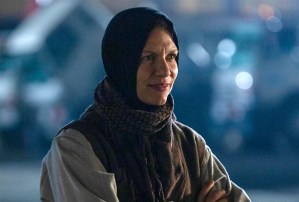 It’s not long before Carrie is donning a hijab and setting out a new mission, getting her old pal Ahman to drive her to see an Afghan contact of hers named Roshan. But Roshan’s wife tells her that the Taliban killed Roshan and dragged him through the streets “because of you. Because of the CIA.” Carrie tearfully apologizes, but says she was Roshan’s only American contact. She never gave him up… or did she? Now she’s doubting herself. (She does have a memory of crying in someone’s arms back in Russia and begging them to stay, but we can’t see who it is.) Plus, on her way back, she’s chased down an alley by two men and only avoids them by hiding out with a group of Afghan women, so she’s not exactly safe, either.

Back at the hotel, a shaken Carrie is greeted by Mike Dunne, who sternly tells her he sent out three teams to locate her. The Afghan VP has moved up his meeting with Carrie to the following morning, he adds, and when Carrie inquires about Russian cooperation with the Taliban, Dunne wonders why she’s asking about Russia — and where she was all night, for that matter. When Carrie arrives for her meeting with the Afghan VP, she sees someone leaving his office — her Russian tormentor Yevgeny Gromov. And now she remembers that the person she was clinging to and begging to stay… was him?! 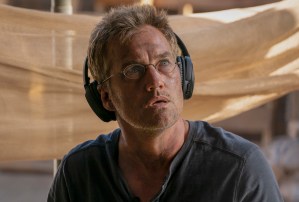 * Our favorite tech nerd Max saw a little combat action, joining a platoon in Afghanistan to install a listening device so they can spy on the Taliban. The soldiers scoff at him at first, calling him “a cable repair guy,” but he wins their respect during a nighttime mission to plant the device. They come under heavy fire on the way back, but they make it back safe, so now they consider “the cable guy” their lucky charm. And hey, the listening device is up and working!

* Saul also had a couple of uneasy encounters with Pakistani intelligence officer Tasneem, played by Nimrat Kaur. (Remember her from Season 4?) He blamed her for leaking inside info about the peace process, while she chided him and the United States for abandoning the region with nothing but phony timelines and benchmarks: “At least make the Taliban think you’re not running for the exits.” She’ll definitely play a big role this season, we’re betting.

Alright, it’s your turn: Give the premiere a grade in our poll below, and then hit the comments to share your thoughts.