In addition to (quite literally) pulling Iris the intrepid reporter into a wild, new storyline, The Flash‘s Season 6 winter premiere also teased a mystery involving Nash Wells and his apparent connection to a familiar face.

Midway through the episode, after the Black Hole assassin took her first shots at Iris and the rest of the Citizen staff, Nash (played by Tom Cavanagh) rushed into S.T.A.R. Labs and immediately asked… Allegra Garcia?… if she was OK. Hmm, that was random for sure (as Allegra’s own, puzzled reaction affirmed). But maybe she was simply the first person he saw…?

Or, maybe there was much more to it. Because at episode’s end, Cisco — before embarking on a mission to chronicle the world’s post-Crisis changes — left the proverbial keys to the S.T.A.R. Labs store with Nash, telling the adventurer from an unknown other Earth, “I hope you find what you’re looking for.” And after Cisco exited, Nash pulled from his pocket a snapshot of him with… Allegra (played by Kayla Compton)? 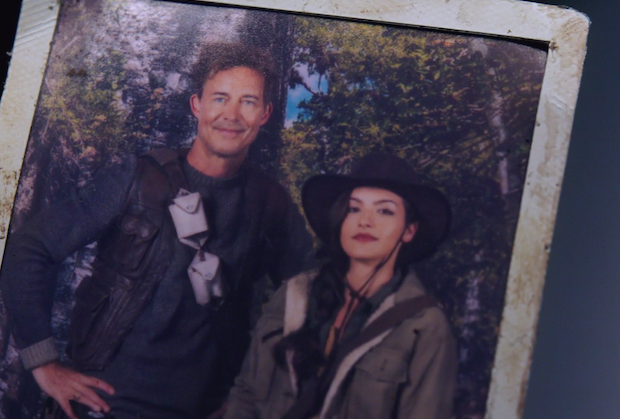 “It sure looked like her, didn’t it?” teases Flash showrunner Eric Wallace. “But she looked a little different. And what does that mean in a post-Crisis world,” where things tiny and large have been changed up?

Could Allegra be the Jesse to Nash’s version of Harrison Wells? But if so, why does she not know it? And why has he kept their connection, whatever it is, a secret?

In keeping with The Flash‘s new, fast-burning “graphic novel” (aka half-season arcs) format, viewers won’t have to wait long at all for more intel on that curious photo. “You’re going to find out the answer to that in the second episode [airing Tuesday, Feb. 11],” Wallace tells TVLine, adding: “That’s a very big storyline: Who is in that photograph? What does the photograph mean to everyone? And how does it affect Team Flash?”