When we last left Kidding‘s Jeff Piccirillo (played by Jim Carrey), he had intentionally mowed down his wife’s boyfriend with his car in the climax of a season-long mental breakdown. His lost sanity was the result of grief stemming from a family tragedy that took the life of one of his sons.

Since the show-within-the-show must go on, how will “Mr. Pickles” recover from vehicular assault and attempted murder? Creator Dave Holstein (Weeds) spoke with TVLine ahead of Sunday’s Season 2 premiere (Showtime, 10/9c) to provide an early peek into Jeff’s fragile mental state, his shaky relationships, and all of the crazy to come on the tragicomedy’s upcoming run.

TVLINE | What has it been like working with Jim on this project?
Jim is wonderful. It’s like working with Buster Keaton, in that you have this insanely talented physical comedian who can also give you an award-winning dramatic performance. Jim represents a lot of my childhood, so to be able to not only work with him but build him a sandbox where he can do his comedic and dramatic work as well…. It’s a really special thing for me to be able to give someone who meant so much to my creative upbringing. We’re on year three of working together and it’s a mind-blowing dynamic to be able to sing with him, dance with him, do puppets with him, write jokes and make people cry.

TVLINE | That Season 1 cliffhanger! What will the fallout from Jeff’s actions look like when we pick back up?
We wanted to make the reality of what happened as grounded as we could and treat the action as a real problem any character would have to get out of — but we wanted to address it in a way that was pure Jeff Pickles. Season 1 was a lot about him denying the truth about what was going on within himself, and we wanted Season 2 to be about someone who decides to tell the truth and deal with the consequences. When we come back in the first episode, Jeff is presented with a number of ways to get out of the situation he’s put himself in. A lot of TV characters would squirrel their way out of trouble and run away from the fire, but he walks right into it.

TVLINE | It seems like Seb (Frank Lagella) may be a better producer than father. What’s on the horizon for him and Jeff this season?
Their relationship is going to change. In Season 1, you had a father who needed to be more supportive of his son, who just had power over him for so long, as both a father and executive producer. In Season 2 we wanted to dramatically shift that and take away a lot of Seb’s power to see where that left their dynamic. We wanted to flip it.

TVLINE | How is Jill going to react once she finds out what Jeff did, and how will that affect the progress they’ve made?
Judy Greer is a national treasure. We wanted to spend a lot of time digging into their relationship this season. The first shot of the whole season is them at their wedding, and if you recall last season, the first and last frames were very much related. I would say the same is true about Season 2 in some regard; the first and last frames tell a story. That story involves their complicated relationship and how Jill reacts to what Jeff did, if she finds out, will only serve to complicate it more. I think it’s about how you can love somebody even when they disappoint and hurt you, and what it takes to keep loving somebody.

TVLINE | Now that Deirdre’s (Catherine Keener) marriage is falling apart, is she heading toward her own type of breakdown?
I like to think of Jeff and Deirdre as two DNA strands helixing around each other. This season they’re both going to be experiencing the effects of divorce, and they’re both going to be spiraling in complementary ways. You’re going to see a lot more scenes with Catherine and Jim, and also a lot more scenes with Catherine and Judy as the season takes on. 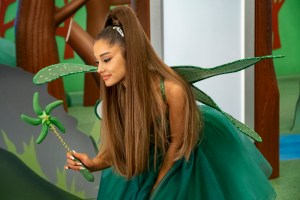 TVLINE | Let’s talk guest-stars. Will Tara Lipinski be back, and what can you tell us about Ariana Grande’s appearance?
For starters, Tara Lipinski will definitely be back, but I won’t give away how or why.

We have a very special musical episode in the middle of the season and Ariana was kind enough to lend her voice. It’s a rather emotional episode and if her voice doesn’t break you in half, nothing will. We put some Pickle wings on her and taught her how to fly.

TVLINE | The Season 2 trailer shows Jeff realizing, “It’s Jill’s fault we lost Phil.” Will he confront those feelings?
He lets them confront him. That’s a very scary door to open and him having that realization when he does and the way he does will hopefully let the audience know he’s telling the truth. He’s going to have to, at some point, deal with it. It’s surprising what happens when he does later in the season.

TVLINE | How do you strike such a delicate tonal balance in the storytelling?
We’re really in the business of telling a very grounded story. My theory is that the more emotionally grounded you make a story, the more absurd and insane everything around it can be. When you have this team of players, you want to hit it out of the park every time. This season, once you get to Episodes 6 through 10, you’re on the rocket ship. And I hope everyone joins us for the ride.