The Sinner goes from zero to 80 in its Season 3 premiere, pushing the pedal to the metal on a new whydunit that places former White Collar criminal Matt Bomer at the scene of the crime.

Episode 1 introduces us to Bomer’s Jamie Burns. He’s a private-school teacher and an upstanding resident of Dorchester, New York, where he resides with his pregnant wife Leela (Midnight, Texas‘ Parisa Fitz-Henley). It’s clear from the very first scene that despite all of his fortunes, Jamie is unfulfilled. He wants nothing more than to just feel something — anything. He gets more than he bargained for when his estranged college buddy Nick Haas (Sharp Objects‘ Chris Messina) shows up at his front door. “I told you not to come here,” he says. “Get the hell out of here!” But Nick refuses to be told what to do. Leela walks up to the door and invites their surprise visitor in for dinner.

At the table, Nick takes it upon himself to analyze Jamie and Leela’s marriage. Jamie snaps and tells him to “shut the f–k up,” but Nick doesn’t listen. Instead, he continues to poke and prod. “Did Jamie ever tell you what we used to do in school?” he asks. “Should I tell her? How would she react?”

Later that night, Jamie and Nick head out for a nightcap back at Nick’s hotel. The two then embark on a drive, with a drunken Nick behind the wheel. They’re on private property that belongs to a painter named Sonya (Breaking Bad‘s Jessica Hecht). “Once we get there, the less you speak, the better,” Nick says. Jamie doesn’t want to participate in whatever Nick has planned, but Nick won’t take no for an answer. 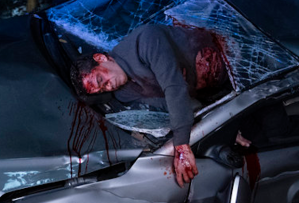 Jamie threatens to jump out of the vehicle, so Nick speeds up. That’s when Jamie clutches the emergency break, which, coupled with the speed, causes a near fatal wreck. Nick goes through the windshield, but he’s not dead. Jamie exits the car and comes around to the driver’s side to find Nick bleeding out from his torso. He attempts to hand Jamie his phone to dial 9-1-1, but Jamie decides against it. He turns off the Blackberry and ditches it in the woods. By the time the authorities arrive on the scene, it’s too late to revive his creepy, creepy friend.

Following the accident, Jamie is haunted by visions of Nick. At one point, he imagines Nick walking up behind Leela and slitting her throat. He doesn’t talk to Leela much about what happened, but he does reveal what Nick was hinting at during dinner: Back in college, Jamie and Nick experimented with each other, but neither of them were feeling it — or so we’re told. 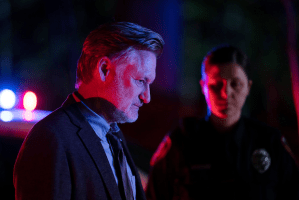 Meanwhile, Detective Harry Ambrose (played again by Bill Pullman) gets tangled up in the case. He’s the only one to suspect foul play. He and Jamie first cross paths down at the station, where he questions Jamie about what went down the night of the accident. “Have you ever seen someone die in front of you? Someone you care about?” Jamie asks. “Once,” Ambrose replies. Jamie says that it was nothing like what he expected. “You think it’ll be horrible but— I’ve known Nick since college and it was, like, I finally saw him for the first time. The way he looked at me…”

Below, Bomer reveals how he got into the mindset of Jamie Burns, what it was like to shoot that first interaction between Jamie and Ambrose, and the most difficult scene he had in Episode 1.

TVLINE | In The Sinner, the crime itself plays out in the first episode, setting up a whydunit instead of a whodunit. Does that make it easier or more difficult to play when you don’t know your character’s motive yet?
Well, I was very fortunate that I had been involved in the show for so long. I had been involved in the show for over a year by the time we started filming, well over a year. So I did know what his motive was, loosely, and I did have a holistic sense of the story. The writers had mapped that out for me. So I had a good sense of the guideposts and what the moments were that, that, that really caused Jamie’s point of view to change and shift and caused this character to change and shift. 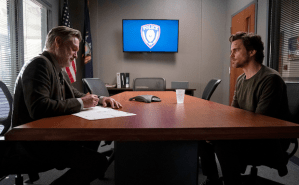 TVLINE | What was going through your head in that first scene between Jamie and Ambrose, and what sort of emotions were you drawing from? Because it was only the first episode, you couldn’t have had much of a chance to really dig into the character yet.
I think your job as an actor is that you have already dug into the character a great deal [beforehand]. You can’t think of it as, “Oh, this is one of the first scenes I’m filming…” Hopefully, in your imagination and in your collaboration with the writers… you’ve built the whole world. So you have an entire history with the character of Nick and what he meant to you and what that decision cost you. You have an entire history of your relationship to your family and to your job and how important that is to you and what it means to you if your secret gets out and you could potentially lose all those things.
There’s so much happening in that scene. There’s so much for Jamie to lose. There’s so much he’s feeling about losing the most pure relationship he ever had in his life [with Leela]. There’s so much happening between him and Ambrose, where they form a connection, that it really is sort of a nucleus of a relationship that goes on a massive journey over the course of the season, and it all starts in that questioning.

TVLINE | The other scene that sticks out from the premiere is the crash, which is revealed in full towards the end. Between those two scenes, which was more difficult?
Well, we were lucky in that we got to film it sequentially, in that not the way it airs on the show, but we filmed the crash before the interrogation scene. So I was able to have the visuals in my head when I was recounting the experience to Ambrose while we’re doing that [first] scene. But I would say [that scene] was harder because you’re required to go to a very intimate and personal emotional place that’s very vulnerable and open. It’s early on in the shoot, so you don’t really know everybody that well. And you know you’re on The Sinner when you’re being questioned by Ambrose… so there’s a lot of pressure on that scene. And Bill is an amazing guy and an actor I revere and respect, as is Chris, of course. But so much of the crash is sort of physical and reactionary to this insanity that’s happening. Whereas, it’s oftentimes more challenging to sit and be present with somebody and really allow yourself to go those places and let each take be different — an environment where you just have to sit there at a table and talk. (With reporting by Vlada Gelman)

What did you think of The Sinner‘s Season 3 premiere? Grade it via the following poll, then drop your thoughts in a comment below.