If we should really consider Star Trek: Picard‘s first three episodes the series premiere, as producers told us, where do we stand after Thursday’s Episode 3? (And where is Jean-Luc heading? And with whom?)

The episode first flashes back to 14 years ago, with Raffi catching Jean-Luc on his way out of a big meeting. He pitched Starfleet higher-ups a plan to keep the Romulan evacuation going, but they called it “unfeasible.” He told them to either accept his plan or accept his resignation… and they accepted the latter, a stunned Jean-Luc tells Raffi. But then she gets a call to meet the higher-ups, and guesses she’s getting fired because he resigned. She storms off — and back in the present, she’s still bitter. When he asks her for a ship and pilot to find Bruce Maddox, she puffs on a snake-leaf vape and notes that he has his fancy chateau to go home to, while she’s stuck in this ramshackle trailer. She kind of wishes he’d have reached out to her when he didn’t need something, she adds. 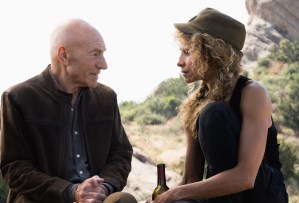 Raffi doesn’t care about his sincere apology, and though she has evidence that a high-ranking Starfleet official let that synthetic attack happen to derail the Romulan evacuation, she’s had enough of conspiracy theories: “I will not go down another rabbit hole with you, J.L.” She does introduce him to a pilot, though: Rios (Salvation‘s Santiago Cabrera), a swaggering, cigar-smoking alpha male who’s got a huge piece of shrapnel sticking out of his shoulder when Jean-Luc meets him. He’s got his own starship, he doesn’t mind getting involved in something illegal, and he has a grudge against Starfleet, too. He piloted a ship that no longer exists, according to Starfleet records. (We later learn that he watched another “grand, heroic captain” die right in front of him on that ship.)

As Jean-Luc packs up to leave his chateau, he and his Romulan friends are attacked by a pack of masked assassins — and this time, even creaky old Jean-Luc gets his hands dirty. (His cane comes in handy, it turns out.) They subdue the invaders and unmask one, and when Jean-Luc asks him about Dahj, he ominously calls her “the destroyer” before spitting acid at them and disintegrating. Agnes shows up, too, and gives Jean-Luc a long list of very reasonable arguments as to why he should let her tag along. So they beam aboard Rios’ ship and find Raffi there, who says she’s only hitching a ride to Freecloud, where she’s located Bruce Maddox. She eyes the perky Agnes warily — I love their dynamic already — and before this newly formed quartet sets sail, Rios glances at Jean-Luc, who points ahead and says, “Engage.” As their ship zips off at warp speed, a variation on the Next Generation theme song plays… and reader, I got chills. 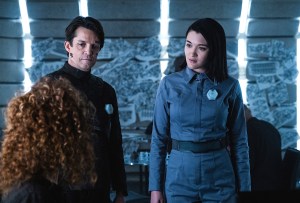 Meanwhile, back on that Borg cube, TNG vet Hugh (Jonathan Del Arco) takes a liking to Soji — he compliments her on speaking to an ailing Borg in his native tongue — and takes her to meet Ramdha, a formerly assimilated Romulan and mystical seer of sorts. Ramdha is reading some kind of Romulan tarot made of triangular cards, and when Soji joins her, she pulls a card with two identical girls on it. “Which sister are you?” she asks, before also calling her “the destroyer” (!) and pulling a gun. Soji stops her from shooting herself, but when she calls home, her mom says Dahj is fine — which we know isn’t true. Narek does his best to comfort her, and tells her he might be falling in love with her, but we also see him debrief with his meddling sister, so we know he’s up to no good. (Plus, anyone else getting a weird, incestuous, Jaime-and-Cersei vibe from these two?)

Alright, Trek fans, we’re three episodes into Picard — how are you liking it so far? (And did you get chills at the end, too?) Beam down to the comments to share your thoughts.