One of the exciting things about the upcoming Birds of Prey movie is getting to see Harley Quinn on her own, instead of as Joker’s sidekick. But if you can’t wait, there’s already a series that portrays just that: DC Universe’s Harley Quinn.

The adult animated series, which premiered on the DC Universe streaming service back in November, has become increasingly enjoyable every week. The pilot introduces us to Harley Quinn (voiced by The Big Bang Theory‘s Kaley Cuoco), who is happily in love with her boyfriend and partner-in-crime Joker (Alan Tudyk)… until he abandons her in Arkham Asylum. Well, that’s not entirely accurate: throughout the year spent in prison, in which Joker never shows up, Harley continues to be in love, to pine after him, steadfastly believing that he’s going to break her out eventually. Her new best friend Poison Ivy (Bless This Mess‘ Lake Bell) repeatedly tries to convince Harley to leave Joker, to no avail; even after Ivy breaks Harley out, Harley manages to get sucked back into the Clown Prince of Crime’s life. It takes some trickery for Harley to finally see the truth, claiming her emancipation from Joker and aiming to become a member of the criminal underworld on her own terms. Relatedly, the movie’s full title is Birds of Prey (and the Fantabulous Emancipation of One Harley Quinn); it was influenced by Jimmy Palmiotti and Amanda Conner’s comic book “reboot” of the character created by Paul Dini and Bruce Timm for the animated Batman series.

Much of TV’s Harley Quinn functions as a very adult version of a Saturday morning cartoon, with familiar characters and animation styles, but one that’s relentlessly full of swears and graphic violence — watch too many episodes in a row and you might see the bright red blood when you close your eyes. It also takes a decidedly adult and intelligent approach to its subject matter, even when the show gets pretty dumb. The ridiculous jokes (some of which don’t land) and cartoonish violence (I cringed a number of times) is balanced out by the series’ admirable insistence on depicting the realities of abusive relationships, and the way you can warp your own thoughts and memories to make them fit into a narrative that feels safe — even when everyone on the outside is constantly telling you otherwise. 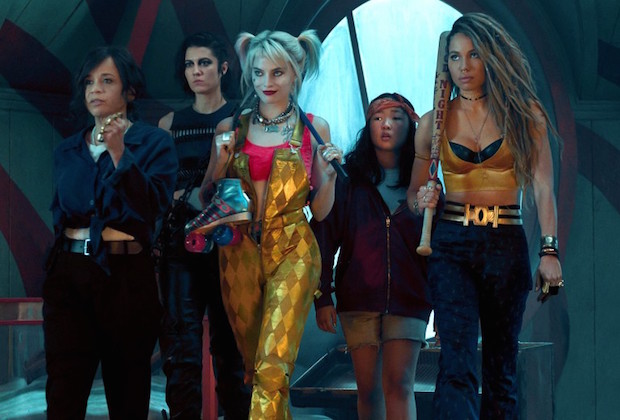 Harley Quinn doesn’t always work—some of the side characters are more eye-rolling than entertaining, and sometimes it feels as if the themes are being beat into your head with Harley’s giant wooden mallet, But when it does, it’s almost exhilarating to watch. The series’ commentary on sexism and misogyny is done through its own unique world. The third episode, “So You Need A Crew?,” centers on how no one will give Harley her own squad because she’s no longer with Joker, and how there’s a glass ceiling for female supervillains. When Harley meets Queen of Fables (Wanda Sykes!), she gets schooled on the unfair standards and limits put on women; in short, women are accepted as long as they don’t get too powerful. When Queen of Fables dared to try and become more powerful than male supervillains, she was punished disproportionately in contrast to the men who are simply thrown into Arkham. There’s also a difference in labels: a man robbing a bank is considered a “criminal mastermind” whereas a woman doing the same is simply a “crazy bitch.”

Much of what works about Harley Quinn is the fact that it never forgets how much trauma is built into Harley because of her past relationship with Joker (and even further back, as the series gives Harley new elements in her backstory). In “Being Harley Quinn,” Harley realizes that she can’t make basic decisions because she has no idea who she is without the abuser she was tied to for so long. As we literally dive into her mind, Harley investigates her own subconscious, which is littered with her ex, and takes a peek at her repressed memories, where she learns an uncomfortable truth.

At the same time, Harley Quinn remains endlessly fun. She does eventually assemble a ragtag crew of misfits — including a reimagined King Shark, though I do wish her crew didn’t include any men—and their criminal attempts help move the season along. There’s a wonderful friendship between Harley and Ivy, who become roommates, and which frequently sees a patient Ivy tries to rein in a naive, impulsive Harley. All of the voice actors are great, particularly Cuoco, but also Christoper Meloni’s sad-sack Commissioner Gordon or James Adomian’s take on Bane, which became an instant favorite and deserves a spin-off of his own.

But the center of it is always Harley, a reimagined antiheroine bouncing around with a childlike enthusiasm for mischief. It’s so easy to root for Harley despite her, uh, murderous streak, because it’s also so easy to see her simply as someone aiming to become her own woman — and yes, her own criminal — independent from her abusive ex.